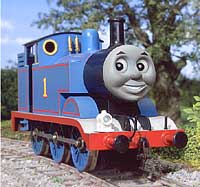 Thomas is a fictional anthropomorphic tank engine created by the Rev. W.V. Awdry in his Railway Series books, made into the British children's television series Thomas the Tank Engine and Friends and its American spinoff Shining Time Station.

In his first appearance in the television series he was described as follows:

-narrator Ringo Starr from the episode "Thomas & Gordon" (aka "Thomas Gets Tricked", as it was titled for the US release). He has also been described as "a little engine with a long tongue".

Thomas the Tank Engine first appeared in 1946, when stories about him were published in The Railway Series by the Reverend W.V. Awdry. He is considered to be the most widely-known fictional locomotive in the world.[citation needed]

When he first appeared, in the book Thomas the Tank Engine, he was a station pilot, used to shunt coaches and trucks for the bigger engines. He longed for more important jobs such as pulling the express train like Gordon, but his inexperience prevented this. Eventually he was responsible for rescuing James after an accident, and the Fat Controller (who was then known as the Fat Director) decided that he was a Really Useful Engine, and ready for his own branch line. He has remained in charge of this line ever since.

His closest friends are Annie and Clarabel, his coaches. However, he is also very good friends with Percy, (despite a lot of arguments), Toby, his old friend Edward, and his frequent substitute Duck.

Thomas is based on the E2 Class built for the London, Brighton and South Coast Railway between 1913 and 1916.

Thomas in the Railway Series 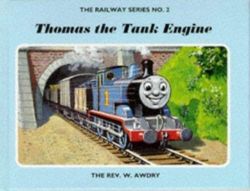 Thomas the Tank Engine first appeared in 1946, in the Railway Series book of the same name. Thomas' character differs strongly between the Railway Series and recent seasons of the television series. In the Railway Series he has generally been depicted with a cheeky and even self-important personality. He believes that he should be more respected by the others, and he gets annoyed when he does not receive this respect. Luckily, Percy and Toby are more than capable of standing up to him, and Annie and Clarabel often rebuke him.

He is aware of his fame in the real world, and following a visit to the National Railway Museum at York he became an honorary member of the National Collection, joining such legendary locomotives as Mallard, City of Truro and Rocket.

The Thomas of the early stories looks a little different from the one shown in later ones. Following the events of the story Thomas Comes to Breakfast, in which Thomas crashed into the Stationmaster's house and tore up his front buffer beam, it was rebuilt without the "dip" it had previously had. Rev. Awdry had noticed that the dip had put Thomas' front buffers out of line with his back ones, hence the story. He has kept this ever since.

Thomas has been the source of some friction between Christopher Awdry and his publishers, who repeatedly asked for more books centred around the character. Although Thomas was the most popular character in the books, both Wilbert and Christopher Awdry had always treated the characters in the books as an ensemble, and so before the television series was released there had only been two books named after Thomas (Thomas the Tank Engine and Tank Engine Thomas Again). After the debut of the television series, there were five more (More About Thomas the Tank Engine, Thomas and the Twins, Thomas and the Great Railway Show, Thomas Comes Home, Thomas and the Fat Controller's Engines). Some of these are rather tenuous in their links with the character: Thomas and the Fat Controller's Engines (the 50th anniversary volume, originally to be called The Fat Controller's Engines) features only one story out of the four centred on Thomas; while in Thomas Comes Home, Thomas appears only on the last page, the rest of the book dealing with the other engines on his branch line while he was away at York.

In the early series of Thomas the Tank Engine, Thomas's personality was similar to that used in the books. From season six onwards, however, his character was modified. He became less cheeky and pompous. He is now kind to other engines, and always ready to stand up for a friend in need. He is always eager to prove himself, and has had many exciting adventures as a result.

He no longer appears to be limited to his branch line and now seems to work all over Sodor. This change in his personality and duties is a result of his "star" status. He is the most popular character in the series, and therefore he has the largest number of appearances.

Thomas' on screen appearances have all been produced by The Britt Allcroft Company, now Gullane Entertainment, and distributed in more than 120 countries to date. The TV series, first broadcast in 1984, was narrated by former Beatles member Ringo Starr, followed by Michael Angelis in later editions. (In the U.S. video releases Starr was followed by comedian George Carlin, and then actor Alec Baldwin.)

In 2000 Thomas starred in a feature film, 'Thomas and the Magic Railroad'. He was voiced by Edward Glen. He was the only engine from the television series to play a major role in the story, and he even leaves Sodor briefly. The film was not a success, but Thomas' movie career continued in the straight-to-video feature 'Calling All Engines'.

Because of his popularity with younger audience, many of Thomas' adventures have been in the form of learning and educational software. A Commodore 64 game was produced in 1987 whereby Thomas was given a series of 7 missions (invariably picking up a coach and taking it to a destination) and a time limit to complete them in. The game featured a fair rendition of the show's distinctive theme tune.

With the popularity of Thomas the Tank Engine among children in recent years, Thomas and Friends merchandise has proven very lucrative. At least five different categories of trains and tracks exist: "Take Along Thomas" with grey tracks; Tomy battery-operated engines with blue tracks; Brio-type wooden engines with wooden rails and roads (by ELC and others); electric model railway (produced in HO/OO gauge by Hornby and N gauge by Tomix); and Lego engines and tracks; along with complementary videos, DVDs, books, games, puzzles, stationery, clothing and household items. An international tour featuring Thomas and his driver was completed in 2005 in honour of the 60th anniversary. In America, Thomas the Tank Engine is thought to be an excellent rôle model for children. The former President George H.W. Bush dedicated the Presidential Train during a ceremony in 2005. Originally there was a comparatively accurate, sturdy and extensive series of toys by Ertl[1]. 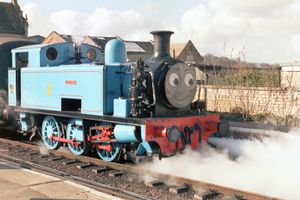 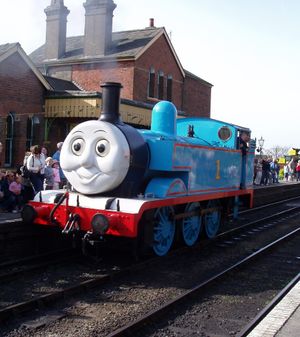 Thomas on the Watercress Line Alresford 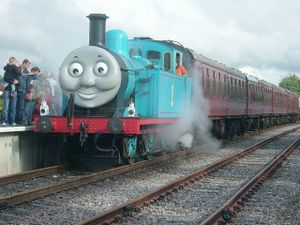 The Nene Valley Railway at Peterborough in England was the first railway in the world to possess a full-scale replica Thomas. This was an industrial tank engine built by Hudswell Clarke that had been nicknamed "Thomas" due to its blue livery and resemblance to the famous tank engine. In 1971 the Rev. W. Awdry made the name official.

Since then other tank engines around the world have been dressed up as Thomas. Some railways, most notably the Strasburg Rail Road and Mid Hants Railway, have gone so far as to rebuild locomotives in order to produce a better replica. This has divided preservationists. Those opposed claim that it disfigures historic locomotives and trivialises the preservation movement. Those in favour claim that they draw much-needed visitors and can help to kindle an interest in steam within young children.

In the UK such locomotives form the basis of Day Out with Thomas events, which have proved to be a very lucrative source of income for preserved railways. A further source of income is the hire of "Thomas" engines to railways that do not have a suitable engine of their own.

In New Zealand, Mainline Steam's Bagnall tank locomotive has appeared as Thomas on a number of different locations, most recently in the main Railway Station in Auckland (New Zealand's largest city). Also in New Zealand, in the Hutt Valley, the Silverstream Railway has a Thomas-like steam locomotive on display at its entrance.

In the United States there are several travelling Thomas replicas. One is narrow gauge, while the others are standard gauge. While in transit between events, their appearance is disguised. Thomas appears in full dress at Day Out with Thomas events hosted by railroads in arrangement with HIT Entertainment. Many of the larger railroad museums and tourist railroads across the United States host Day Out with Thomas events periodically[2].

A "Real Thomas" was used in a special play staged to celebrate the 80th birthday of Queen Elizabeth II, starring beloved characters from children's literature. In the play Thomas was used to convey Sophie Dahl to centre stage.

When the Rev. W. Awdry created Thomas he existed only as a push-along wooden toy made for his son, Christopher. This engine looked rather different from the character in the books and television series, and carried the letters NW on its side tanks. Awdry claimed that this stood for "No Where", but later works would identify the railway Thomas and his friends worked on as the North Western Railway.

Awdry wrote four stories about Thomas, which were collected into a book called Thomas the Tank Engine. For this, the publisher hired an illustrator named Reginald Payne. Payne decided to base his version of Thomas on a real locomotive, an E2 Class of the London, Brighton and South Coast Railway. Awdry was initially annoyed that Thomas in the book differed so substantially from his original visualisation, but was satisfied when Payne explained that he was taken from a real prototype. Indeed, in later books, Awdry based all his characters on real locomotive classes.

One detail of Thomas' design bothered Awdry. This was the fact that the front end of his featured a downward slope, which meant that his front and back buffers were at different levels. This was an illustrator's mistake that was perpetuated in subsequent books. The accident in 'Thomas Comes to Breakfast' was partly devised as a means of correcting this.

Unfortunately, despite creating the visual image of such an iconic character, Payne did not receive any credit for his work, and it is only since the publication of Brian Sibley's 'The Thomas the Tank Engine Man' that he has started to receive major recognition. Indeed, it had often been erroneously assumed that C. Reginald Dalby, responsible for illustrating books 3-11 and repainting the illustrations of book 1, was the character's creator.