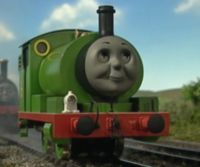 Percy the Small Engine is a fictional anthropomorphic steam engine from the children's television series, Thomas the Tank Engine and Friends, and The Railway Series books written by the Reverend Wilbert Vere Awdry and his son, Christopher Awdry.

Percy lives on the Island of Sodor with many other locomotives, including Thomas the Tank Engine, Gordon the Big Engine and Henry the Green Engine. He is the smallest, youngest and probably cheekiest, of the principal steam engine characters. He carries the number 6 on his bunker.

The Fat Controller brought him to Sodor when there was an engine strike due to a shortage of shunting engines. The bigger engines initially tried to bully him, but Percy soon showed that he was more than capable of standing up for himself. After a few years shunting at the Big Station, the Fat Controller promoted him to goods traffic on Thomas' branch line. When not pulling trucks, he can be seen pulling the post train or even taking Annie and Clarabel when Thomas is busy. Percy's best friends are Thomas and Toby.

He is reasonably experienced, but can still occasionally be a little naive and overconfident. In that sense, he is the perfect foil for Thomas- who can be just as headstrong.

Percy's first appearance in The Railway Series was in book no. 5, Troublesome Engines, originally published in 1950. He was given his own title with book no. 11, Percy the Small Engine

In the Thomas the Tank Engine and Friends television series, he made his debut in the first season, in an episode called "Trouble in the Shed" which originally aired in the mid-1980s.

He was voiced by Linda Ballantyne in the Thomas and the Magic Railroad film.

Like Henry the Green Engine, Percy was the source of much friction between Rev. W. Awdry and C. Reginald Dalby, the illustrator of The Railway Series. Awdry complained that Percy did not look like a real locomotive, an issue that had caused contention between the two men on several occasions and concerning several characters. In the case of Percy, it was particularly infuriating, as Awdry had built a model of the engine in order that the artist could use it as a reference.

All this came to a head when the book Percy the Small Engine, centring on the eponymous character, was written. Awdry sent Dalby a letter requesting that he should make Percy look less like "a green caterpillar with red stripes". Insulted by this, Dalby resigned from the Railway Series.

Subsequent illustrators modified the design to make Percy look more like a typical industrial locomotive. The television series, however, utilised the original design.

The phrase "a green caterpillar with red stripes" resurfaces in the later story 'Woolly Bear', in which Thomas uses it as an insult to Percy.

The Origins of Percy

In general outline, he is a fairly typical British industrial shunting locomotive. His bunker is quite unusual for an 0-4-0 shunter, but was presumably added to allow him to travel greater distances without refuelling than was previously possible. It is not known where Percy came from, but according to the book Troublesome Engines, he was bought at an "engine workshop" by the Fat Controller, due in part to Edward being teased for shunting.

Rev. W. Awdry considered it essential that his railway stories should be as realistic as possible. To this end, most of his locomotive characters were based upon real designs. However Percy was designed before that policy came into effect. Percy's fictional history is largely unknown, as he does not precisely match any real locomotive design. He does bear a resemblance to several designs of 0-4-0 tank locomotive built by the Avonside Engine Company such as GWR No. 1340 Trojan, and so Awdry stated that Percy had probably begun as one of these, but had been extensively rebuilt. Among the modifications were parts made by Hunslet [citation needed] of Leeds and Ruston 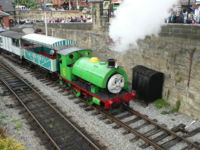