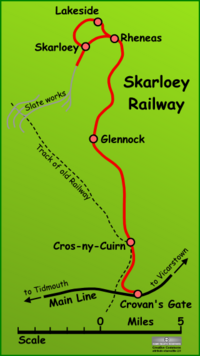 Map of the Skarloey Railway

On the fictional Island of Sodor in The Railway Series by Rev. W. Awdry, the Skarloey Railway is a narrow gauge railway which runs from the main line at Crovan's Gate to the passenger terminus at Skarloey. Beyond Skarloey the line continues to a slate quarry.

The railway is run by the Thin Controller. Its chief engineer is Mr Ivo Hugh.

The line was inspired and based on the Talyllyn Railway in Wales, where Rev. W. Awdry worked as a volunteer guard in the 1950s.

The line's history closely parallels that of the Talyllyn Railway in Wales. According to "research" by Rev. W Awdry, the line began as a plateway and was opened in 1806 to collect slate from the local quarries. It was worked by gravity and carried mineral traffic that was shipped from Balladswail. Following the Ffestiniog Railway's lead in 1863 James Spooner was engaged to survey a line for steam locomotives. It was also planned to develop passenger traffic for tourists to the Springs at Skarloey where there would be hotels and guest houses.

It was later realised that the line could carry visitors to the local landmarks of Skarloey (which means 'Lake in the Woods') and Rheneas ('Divided Waterfall'). Like all railways at this time, it was powered by horses, but by 1865 the railway's owners decided they needed steam engines to help out. They ordered two engines from the locomotive builders Fletcher Jennings Ltd in Whitehaven, England. These engines were Skarloey and Rheneas.

Skarloey and Rheneas worked hard for many years, but eventually the demand for slate decreased due to cheaper slate being imported from Italy. After World War II the railway was in a poor state, and the old mines had become ammunition dumps. The owner, Sir Handel Brown, thought he would have to sell the railway. At this point, the railway was taken over by Mr Peter Sam, who became the Thin Controller. With the help of Mr Ivo Hugh and a number of volunteers, they managed to keep the railway going. The railway's main source of income was now tourist traffic.

Eventually, Skarloey failed and Rheneas was left to manage alone, which he did admirably until Peter Sam and Sir Handel were bought from the Mid Sodor Railway to help out. Later they purchased Rusty the diesel and Duncan.

It was around this time that the slate quarries were reopened. The slate from these quarries was pure and free from metallic impurities, which meant it was in demand as other slate demand fell.

In 1965 the railway celebrated the 100th birthday of Skarloey and Rheneas with the opening of a new branch line to Lakeside. A second triumph came when Duke the Lost Engine was saved and brought to the railway, where he was repaired and now works the passenger trains. 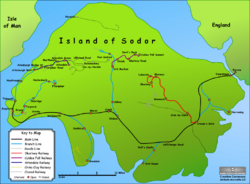 A map of the Island of Sodor showing the railway system - the Skarloey Railway is shown in red (click to enlarge).

Since the centenary celebrations of 1965, the Skarloey Railway has gone from strength to strength. Three of its engines, Peter Sam, Sir Handel and Duncan, have visited the Talyllyn Railway. More recently, the railway purchased a new diesel, Fred, and built a new steam engine Ivo Hugh.

The Skarloey Railway today continues to carry slate, despite competition from the mainland, and takes tourist traffic around its part of the island.

There is a small motorised trolley used by Mr Hugh, known as Mark V. However, this has only been mentioned in The Island of Sodor: Its People, History and Railways.

The same book also mentions a small, black, beetle-like electric engine owned by the Ministry of Defence that works at the ammunition dumps. Again, this has never been seen in the stories.

In The Railway Stories books, all of the steam engines are painted the same bright red colour with blue lining (except for Duke, who retains the dark red-brown paint from his days on the Mid Sodor Railway). Unusually, the engines do not have nameplates - their names are painted in gold directly on the side of the saddle tank or boiler. The diesels are painted dark grey. The steam locomotive livery features lots of polished brass-work, and seems to be unchanged from the opening of the railway (judging by the illustrations in Very Old Engines).

In the TV series, all of the engines are painted in wildly different colours. This was presumably to assist the show's young fans in identifying the different engines. Whilst Skarloey and Rheneas retained their Railway Series colours, Sir Handel and Peter Sam retain the colours that they wore when they were named Falcon (blue) and Stuart (green) on the Mid Sodor Railway. Rusty the Diesel was painted rusting orange, which, according to a Thomas the Tank Engine annual, led to his name. Duncan was painted bright yellow.

Agnes, Ruth, Lucy, Jemima and Beatrice are based on Talyllyn Railway carriages 1-5. The brake van Cora is based on the Corris Railway brake van that now runs on the Talyllyn. Open coaches Ada, Jane and Mabel were rebuilt to a more conventional outline when funds became available. Gertrude and Millicent, former Mid Sodor Railway bogie coaches, are based on Corris Railway stock.

In The Railway Stories books, the open carriages and guard's vans are painted blue (very similar to the British Rail rail blue). The enclosed carriages are painted off-white (upper half) and blue (lower).

There have been a number of people associated with the railway who have appeared in the stories and TV Series.

Known properly as Mr. Peter Sam, the Thin Controller is the manager of the Skarloey Railway. A year before the arrival of Sir Handel and Peter Sam, he had to serve as conductor for all the trains.

The Thin Controller was introduced in Four Little Engines, the tenth volume of the Railway Series and has now been introduced into the Thomas the Tank Engine & Friends TV series as Mr. Percival, the narrow-gauge controller. He is based upon Edward Thomas general manager of the Talyllyn Railway.

According to Sodor: Reading Between the Lines, there are two thin controllers.

Ivo Hugh was one half of the two-man train crew in the final days of two-engine operation, alongside The Thin Controller. He was also the line's Chief Mechanical Engineer (CME) and became Rusty's driver, upon the diesel locomotive's arrival.

Hugh had retired by the time of New Little Engine and had the honour of having the railway's new No. 7 named after him.

His son succeeded him as the new CME.

Former owner of the railway, there have been two Sir Handel Browns:

Glennock station, as portrayed in Four Little Engines, is based on Aberllefenni Station on the Corris Railway.

The works at Crovans Gate are based on Tywyn Pendre on the Talyllyn Railway.

The Skarloey Railway on Television

The railway first appeared in the fourth season of Thomas the Tank Engine and Friends. However, it differed significantly from the railway as portrayed in the books. It is much longer, with a number of branch lines. It appears to be part of the North Western Railway rather than an independent line. It was run by the Fat Controller, but from the ninth season onwards was under the control of "Mr Percival "(which was his Amer. name), a man strongly resembling the Thin Controller (Mr. Percival has actually been referred to as the Thin Controller in the British version). Mr Hugh does not appear at all.

The railway has many more carriages in this version. Ada, Jane, Mabel, Gertrude and Millicent are entirely absent. Coaches resembling Agnes, Ruth, Lucy, Jemima, Beatrice and Cora do appear, but are unnamed and rarely speak. Ivo Hugh (the engine) has not appeared either, as the book in which he appeared (New Little Engine) has not been televised. However, the line has three new engines in this version named Bertram, Mighty Mac, and 'Fearless' Freddie, who acquired the number of Ivo Hugh.