7-Percy's Ponders: Why Are Doughnuts Round?

9-Thomas and the Powerslide Race

6-Percy's Ponders: What is Newton's Laws?

2-Percy's Ponders: How Can You Write a Paragraph?

Step 7: Return To The Island

In the beginning of the game, you are only playable as Thomas and only the Island of Sodor is unlocked. You must complete race mission each time to unlock more places like Narrow Gauge Valley and Devil's Peek.

Details of Each of the Chapters in the Game

Percy Arena Sir Topham Hatt tells Percy to take a day off from coal mine work to take people on a tour of Great Waterton. While getting his coaches at Great Waterton, he sees an old, rusty arena in the middle of the Diesel Runts' Forest. He calls it at that moment his arena and joined with Thomas, Toby, and Stanley, declares a race on "his" discovered arena.

Secrets, About! Go on an adventure with Silly Billy (you play as him) to search around Great Waterton for secret switcher shortcuts!

Gordon's Hill Circut Gordon declares a race on his hill. Joined by Billy, Stanley, and Thomas, it's a crazy race full of fun on Gordon's hill!

Toby's Tram Revo Toby's cousins come to visit. They are:

Toby's daring cousin, Roburto wants to race with Toby, Ecudoe, and Sam. Thomas decides to join in, too!

Ecudoe's Revenge Ecudeo wants to have revenge on Toby for winning the race and decides to hide Toby's bird house. Play as Thomas to chase down Ecudeo with the bird house! TOBY'S BIRD HOUSE!

Narrow Gauge Hide and Peep The narrow gauge engines want to play! You as Thomas will search all over the narrow gauge incline for 4 engines: Peter Sam, Sir Handel, Rusty, and Mighty Mac!

Green Valley Derby Since Henry is green, he decides to celebrate his color with a race against him, Stanley, Diesel, and Thomas in his favortie part of his forest, Green Valley!

Jumpers a Go-Go! At the new unlocked area, Devil's Peek, the rain does pour down! But that doesn't stop the kids of Sodor standing on the mountain peek where the trains go by and try to make the engines jump over the rope! The rain comes and Thomas must use Devil's Peek to get the Great Waterton. But the kids still have their jump ropes about. Press on the A button really hard to jump over the ropes while racing down Devil's Peek! Mini-game.

TUGS Derby Thomas and the TUGS race for the Tugsomas cup! Racing with Thomas (well, it's a water race, so Thomas is on a floatie in the race) are Sunshine, Ten Cents, and Zip (Zero Stack)!

Diesel's Rail Sounds Play as Diesel as you race down the rails to collec music notes to make a cool surprise Thomas song!

Arthur's Fishy Racetrack Join Arthur at the fishing docks (new unlocked area) in a cool to the fishy smell race. With Arthur (playable character) is Thomas, Percy, and Whiff.

Stinky Coin Collecting As Whiff, go all around the fishing docks the collect 500 coins in 3 minutes!

Thomas' ABC Game Thomas has discovered a learning book with words with missing ABC's. With Thomas and Percy's help, use your controller to fill in the missing letters to each of the words in the book!

Island of Sodor GP The winning race of the game. Same as Island of Soodr GP but at nighttime and Sartin and Sam replaced Edward and Toby and also, Whiff, Stanley, and James joined in the race.

The Fun of It

No differences except from the XBOX 360 and DS versions. In XBOX 360, TUGS race is not even a playable race and in the DS version, TUGS are seen but there is no race for them.

Characters To Play On Certain Levels

Races (that are copied with new characters)

Front cover of the game

From Thomas and Friends

All Stars Cup (5th cup, unlockable when unlocking all of the hidden characters)

Thomas and Friends: Spooks and Escapes 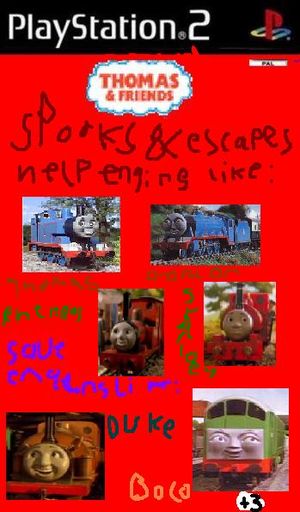 The PS2 cover of the Game

Thomas and his day

Thomas and His Friends Want to have a Fun Day, Could you Help?

Thomas and Friends Sodor Rally Revo for the Wii, DS, and Playstation 3

Wow! Thomas and all the engines are all challenging each other to races! Can you beat your opponents?