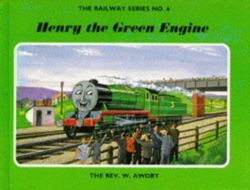 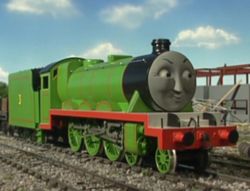 Henry the Green Engine,
as portrayed in the TV series.

Henry the Green Engine is a fictional anthropomorphic 4-6-0 steam locomotive from The Railway Series books written by the Reverend Wilbert Vere Awdry and his son, Christopher Awdry, and the spin-off children's television series, Thomas the Tank Engine and Friends.

Henry lives on the fictitious Island of Sodor with many other locomotives, including Thomas the Tank Engine, Gordon the Big Engine and Percy the Small Engine. He is engine number 3 on the North Western Railway.

Although he is a hard worker, he can be vain and arrogant, particularly with engines he sees as less "important" than himself.

Henry's first (mis-)adventure was in 'The Sad Story of Henry', the third story in the Railway Series book The Three Railway Engines. In this story he went into a tunnel and refused to come out due to fears that the rain would spoil his paint. As punishment, the Fat Controller ordered that he was bricked up in the tunnel. He was eventually let out to help Edward pull Gordon's express train, after Gordon burst a safety valve.

Henry was originally a failed prototype engine, who as the result of a small firebox was often ill and a poor steamer. The Fat Controller gave him special Welsh coal, which helped. But worse was to come - Henry had an accident while pulling the express fish train known as the Flying Kipper. The Fat Controller sent Henry to the works at Crewe, where they rebuilt him into his present shape. Henry was given a new firebox which gave him a similar specification to an LMS Class 5MT Black Five" locomotive. This cured his illness completely.

Henry now works on the main line. He can pull coaches and trucks equally well, and sometimes even hauls the Express when Gordon is not available. He is still the engine responsible for the Flying Kipper, and in the television series he also brings the post from the Mainland.

He has been in the television series from the start, and in recent seasons has been identified as part of the Steam Team, the eight central characters.

There have been two Railway Series books devoted to him, namely Henry the Green Engine and Henry and the Express.

Behind the scenes, Rev. W. Awdry had a great deal of trouble with the illustrators' depiction of Henry. He was unhappy with the way C. Reginald Dalby had portrayed the character, as he looked almost identical to Gordon, especially when he was painted blue at the end of Book 1 and in Books 2-4. In one illustration in Tank Engine Thomas Again, he looks identical to Gordon. To make things worse, the character was portrayed inconsistently, often having several different appearances within the space of a single story: in most of Dalby's illustrations Henry was portrayed as a 4-6-2, but occasionally he becomes a 4-6-0 instead.

Awdry's original idea had been to write Henry out of the series, hence the character's illness. But by the sixth book, Henry the Green Engine, he had decided against such a drastic measure. He instead decided to have the character involved in a serious accident, allowing him to be rebuilt into a Class 5MT which, being a real locomotive, would effectively force Dalby to be consistent.

Accounts differ as to when the accident actually took place. In The Island of Sodor: Its People, History and Railways the Rev. Awdry states that it occurred in 1935 (when Stanier 5MTs were still being built). However, Sodor: Reading Between the Lines, by Christopher Awdry, states that it took place in 1951, the year the book was published. The latter is probably an oversight on Christopher's part, as the dates listed in The Island of Sodor are all consistent with one another, and suggest that, certainly for the earlier books, the events on the railway happened many years before the books were published.

There is a certain amount of debate as to the nature of Henry's rebuild, caused by the book The Island of Sodor: Its People, History and Railways. It was written to provide some historical background to the world of The Railway Series and to correct pictorial inconsistencies that had occurred in the earlier volumes. In this book, the Rev. W. Awdry claims that the pre-rebuild and post-rebuild Henry are actually two completely separate engines. But the stories do not indicate this since he still seems farmiliar with events that happens before the crash, and the other engines certainly don't know this. Indeed, Gordon in the story following the rebuild, and in the story 'Percy Takes the Plunge', set after the rebuild, Henry recalls the events of 'The Sad Story of Henry', which suggests that his memory survived the rebuild. As both sources may be considered equally canonical, the question of whether there have been two Henries or one will always have a paradoxical answer and will likely remain unanswered.

The same book featured a certain amount of retcon to explain Henry's old shape in the first place. The explanation devised was that he was an experimental locomotive built according to plans stolen from Sir Nigel Gresley. Owing to a mistake, the wrong plans were taken and the locomotive built was so riddled with faults that the only person who could be persuaded to buy it was the Fat Controller (then the Fat Director), who at the time was desperate for any locomotive he could get. The name of the thief is never revealed. The Fat Controller claims that he wanted an Atlantic (a locomotive with a 4-4-2 wheel arrangement). This latter point is worth noting, as William Middleton, the very first Railway Series artist, portrayed Henry as this type of engine, as did Awdry's initial sketches.

The Island of Sodor also features a biography of the Fat Controller, which mentions that he was apprenticed with Stanier at Swindon Works. It is possible that this is another piece of retcon to explain how he was able to have Henry rebuilt so easily – something that even Rev. W. Awdry admitted was "a mystery".

In the book Sodor: Reading Between the Lines, it is said that Henry looks very much like a Stanier 5MT, which suggests that he is not totally identical to one of these engines. It is not clear why Christopher Awdry should have felt the need to contradict his father, who was, of course, the original author. It may be simply a result of copy-editing errors and publication deadlines, after all, Mavis is correctly described as a Drewry Class 04, yet is claimed to be an 0-4-0.

In the television series, some degree of technical consistency was achieved. Unlike his Railway Series counterpart, Henry was never portrayed as a 4-6-2; always a 4-6-0. But there were major differences between the TV version and the Book versions of Henry, in his old, and new incarnation. His old shape appears to have been used as his new shape as well, as Henry's old shape appears to be identical to his newer one. The only difference appears to be the presence of a sand hatch, and different boiler. This could have been done for ease of the changeover to his "Black Five"-esque appearance. When the new models were made in 2000, they gave Henry a cutoff splasher approximately where his old shape's tapered boiler and old cutoff splasher was. Also, if looked at closely, when Henry is wrecked, his sand hatch from his new shape is already fitted! In another continuity error, during a head-on shot after Henry has returned from his Crewe rebuild, his old shape (without external steam pipes) is used.

Henry was the central character of what might be the most controversial story in the history of the Railway Series. In the story 'Henry's Sneeze', the character blasts some troublemaking schoolboys with soot. The story was attacked in 1972 because the boys in question were said to have been rendered "as black as niggers".

So controversial was the issue that it was actually reported in the national press. Awdry himself claimed that it was a case of oversensitivity on the part of the race relations board - a complaint that was misinterpreted by some members of the public as meaning that he was a racist. To solve the problem, he changed the offending sentence to "as black as soot", which has been used in every subsequent edition of the book.

Henry was the focus of Rev. W. Awdry's irritation once again in the 1990s, when the third season of the television series 'Thomas the Tank Engine and Friends' was released. This series featured a number of original episodes that had not been adapted from The Railway Series stories, some of which annoyed Awdry with their lack of realism. The story that particularly angered him was called 'Henry's Forest'.

This episode begins by explaining that Henry's favourite place on Sodor is a forest through which the line runs. He likes to stop here and admire the scenery. A storm damages the forest, making Henry sad. The episode ends happily, with new trees being planted to replace the ones lost.

Awdry's complaints were directed at two aspects of the episode in particular. One was that it was unrealistic to have a railway running through a forest. Britt Allcroft, the series producer, countered by claiming that she had seen a number of lines that do just that.

The other aspect was that Henry stops to admire the view without alerting the signalman, which was in direct contravention of British Railways' Rule 55. This, Awdry argued, would never be allowed to happen in real life, and would be highly unsafe.

In the Season 5 story 'James & the Trouble with Trees' some trees are removed because 'The Fat Controller says they're too close to the line.' This is evident in Season 8 story 'Henry and the Wishing Tree', in which the trees are further back. It seems likely that these changes were a response to Awdry's complaints.

Henry in Thomas and the Magic Railroad

Henry is voiced by Kevin Frank in the Thomas and the Magic Railroad movie. [1]. In this incarnation, he is the only steam engine to have an American accent, and he appears to still suffer from boiler trouble. The major difference between this incarnation and the pre-rebuild version of the television series is that his sickness is cured by "Island of Sodor coal" rather than Welsh.