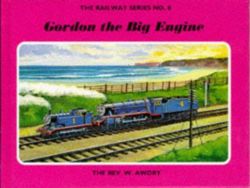 Gordon the Big Engine is a fictional anthropomorphic tender locomotive in The Railway Series books by Rev. W. Awdry. Gordon is painted blue and carries the number 4. Gordon views himself as the most important engine because he is the biggest (before Murdoch arrived) and he pulls the Express. Gordon is one of the central characters in the TV series Thomas the Tank Engine and Friends, which is based on the books.

Although he can be boastful, he is hard working and strong, and performs his express duties to the absolute best of his ability. He is also the fastest engine in the Island of Sodor. He is sometimes teased by other engines, particularly the smaller ones, and has been known to have a good-natured rivalry with fellow main line engines Henry the Green Engine and James the Red Engine. Nevertheless, he is also quick to forgive and sometimes gives advice and assistance to other engines. He also has a ready wit.

He is usually the first choice for special trains, and was honoured to pull the Royal Train when Queen Elizabeth II visited Sodor. His great strength means that he is also sometimes called upon for heavy goods trains and rescue operations, but he by far prefers passenger trains.

In the Railway Series book The Eight Famous Engines, Gordon made headlines when he visited London. He has also been to Carlisle when an enthusiasts' special train broke down.

Despite his fame and importance, he can be very competitive. He particularly dislikes being told about engines who are faster than him, and once lost his dome through trying to compete with City of Truro.

He is proud of having been built at Doncaster and his work on the East Coast Main Line in his youth. Therefore, he never misses an opportunity to talk about his Doncaster brothers and cousins from the London and North Eastern Railway. He arrived on Sodor in 1922.

His first appearance in the Railway Series was in Book 1, The Three Railway Engines. The eighth book in the series was dedicated to him, as was the thirty-first.

Gordon was one of the first characters created in The Railway Series, initially to provide a foil for Edward. Inspiration came from watching locomotives at work on the Great Western Railway near the Rev. W. Awdry's childhood home, in particular from the large locomotives that would have to be assisted up the hill. When a story inspired by this was devised for the young Christopher Awdry, the big engine was named Gordon after a bossy child who lived on the same road.

Gordon is a 4-6-2 similar to the Flying Scotsman, a LNER A3 class locomotive. In the book Enterprising Engines, it is stated that the two engines are in fact brothers. The Rev. Awdry elaborates upon this in The Island of Sodor: Its People, History and Railways . This companion volume to The Railway Series states that Gordon was built as a test locomotive for the Great Northern Railway. When the Great Northern Railway had finished with him, they sold him to the Fat Controller for a knockdown price. Gordon was rebuilt by the London, Midland and Scottish Railway at Crewe Works with a new chassis designed by William Stanier, the Fat Controller's mentor, who was also responsible for Henry's rebuild.

In actual fact, the reason for this somewhat complicated explanation lies with the early illustrations of the character. The Rev. Awdry constantly sought railway realism in his books, and often argued over the illustrations provided by C. Reginald Dalby, which tended to be inconsistent in terms of scale and accuracy. In an effort to combat this problem, he sent the illustrator a number of photographs of the characters as portrayed on his own model railway. The model of Gordon was converted into an A3 from a Tri-ang model of a Princess Royal class locomotive. The conversion was not perfect and still retained many of the Princess Royal's features, including the chassis, and so these errors were carried over into subsequent illustrations.

Gordon in 'Thomas and the Magic Railroad'

Gordon is voiced by Neil Crone on the Thomas and the Magic Railroad film. His character was very much as it appears in the television series and early Railway Series books.

In the late 1980s, a full-size replica of Gordon could be seen on the Mid Hants Railway. This replica was far from precise, as it was not an A3. In fact, it was an Austerity 2-10-0 class designed for heavy freight work. However, it was suitable as a replica for three reasons. Firstly, it was a very large engine. Secondly, it was preserved in the rich blue livery of the Longmoor Military Railway, similar to Gordon's own colour scheme. And thirdly, it was actually called Gordon. All that was needed for the conversion was the addition of a face on the smokebox door and the replacement of the letters "LMR" on the tender with a large number 4.

The engine usually resides on the Severn Valley Railway.