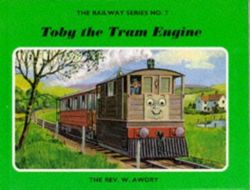 Toby the Tram Engine first appeared in 1952, in the Railway Series book of the same name. 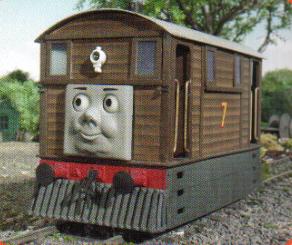 He is a tram engine with cowcatchers and sideplates covering his wheels. His main job is taking stone to and from the quarry with his coach Henrietta, but he also helps with other jobs on the line (from collecting hay to shooing bulls off the line). He is old and wise, and is always willing to help other engines with the benefit of his experience. He is often the one responsible for resolving arguments between Thomas and Percy.

He is equipped with a loud bell, but only has small water tanks. For this reason, he is unable to make long journeys on his own, and needs help to do so.

Toby and Henrietta used to work on a branch line in East Anglia. Unfortunately, buses and lorries arrived and took all their work, and so the branch line was doomed to close. But luckily a stout gentleman arrived on a holiday with his family. Toby thought the gentleman was very nice, but little did he know that he was none other than Sir Topham Hatt, the Fat Controller. When Sir Topham needed an engine with cowcatchers and sideplates, he immediately arranged for Toby and Henrietta to come to Sodor. Toby was very grateful, and since then has more than proved his worth with his expertise in all branch line matters.

He first appeared in the Railway Series in Toby the Tram Engine (1952), and appeared in several subsequent books. In 1988 he appeared in the second book devoted to him, Toby, Trucks and Trouble by Christopher Awdry. He appeared in the first season of the television series and is considered to be one of the central characters.

Colm Feore provided the voice of Toby in the film Thomas and the Magic Railroad.

Toby is one of the few characters to have his own song ('Toby'), based upon his theme by Mike O'Donnell and Junior Campbell.

The prototype for Toby is a J70 class tram engine from the Great Eastern Railway. His cowcatchers and sideplates allow him to run on roadside tramways, which other engines are not allowed to do for safety reasons. J70s were used for light duties, such as branch line work and dock shunting.

They were most famously used on the Wisbech and Upwell Tramway, which local residents have erroneously claimed was the inspiration for Toby. In actual fact, inspiration for the character came from the Rev. W. and Christopher Awdry watching a J70 at work at Great Yarmouth, but all official biographies of the character state that he did come from that line.

In the Railway Series, Toby received a new livery of chocolate brown with blue sideplates (his colour remained the same in the TV series). This livery was designed to mimic that which he would have worn on the Great Eastern Railway.

Unfortunately, no J70s survive in preservation, but the Battlefield Line has constructed a diesel powered replica of Toby as have the East Anglian Railway Museum.

On the Rev. W. Awdry's model railway, Toby was represented by a Y6, a locomotive similar to but smaller than the J70. Awdry wrote an article for Railway Modeller magazine on the construction of this locomotive.

Christopher Awdry has said that Toby is his favourite character, partly because he was there when his father received the inspiration to create him, but also because as a child he had travelled in the cab of two J70s.

Henrietta is Toby's faithful coach. As she is charmingly introduced in the book: "Toby is attached to Henrietta". She worked with Toby on their old railway, and when that line closed Toby could not bear to leave her behind. The stationmaster had wanted to turn her into a henhouse, but the Fat Controller agreed that "that would never do." The two are absolutely inseparable, and whenever they are apart they worry about each other.

She carries passengers and is used to bring quarrymen to and from work. She has even been used as the Fat Controller's private coach.

Henrietta is the only named character not to have a face (with the exclusion of newer characters like Tiger Moth and Butch). She is based on a Wisbech and Upwell Tramway four-wheeled coach.

Henrietta now goes with Toby to the quarry loaded with workmen to help shape rough stone.

Toby also has a brake van named Elsie, mentioned in The Island of Sodor: Its People, History and Railways and the 1979 Thomas the Tank Engine Annual. However, she has not yet appeared in any stories. According to Rev. W. Awdry, she is based upon a Wisbech and Upwell Tramway luggage van and shares a shed with Henrietta. 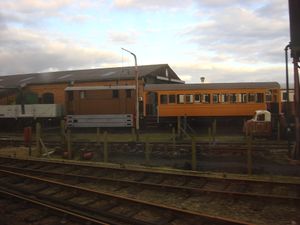 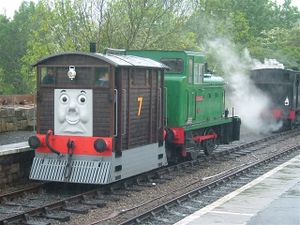 There are at least two replica Toby locomotives in the UK.

One is based at the East Anglian Railway Museum. However unlike the J70 steam loco that Toby is based on, the replica Toby is in fact a diesel-hydraulic 0-4-0 shunter with a metal casing over it. When this diesel was converted a replica Henrietta was built from scratch. The underframe was taken from an old box van, but the body was a complete new build.

Toby and Henrietta can be seen running on the Museum's Thomas & Friends days and also at some other preserved railways around the country from time to time.

Another replica tours the country; pictured here at the Avon Valley Railway on their 'Thomas Day' in May 2007.