Narrow gauge engines from Thomas the Tank Engine and Friends

This article describes the Narrow Gauge Railway engine characters that have appeared in the television series Thomas the Tank Engine and Friends. They are split into three sections: The Thin Controller's Engines, Mid Sodor Railway Engines and Other Engines. The engines are described in numerical order within each section and then in order of debut appearance. 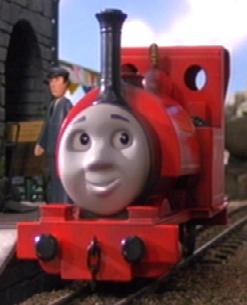 Skarloey in The Grand Opening

Skarloey is the oldest engine on the narrow gauge Skarloey Railway. Skarloey has appeared in both the television series and The Railway Series books. He is painted red, and sports the number 1 as well as nameplates bearing his name on both sides.

When Skarloey first appeared in Season 4, he had not worked in some time, but soon proved his worth once more. Throughout the TV Series, he has been a dedicated worker and a very wise engine. However, in later seasons, there has also been an element of timidness, and occasional childishness, adding depth to his character. 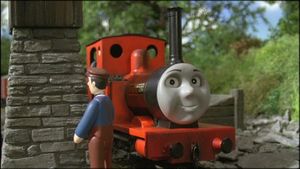 Rheneas in The Old Bridge

Rheneas is one of the oldest engines on the Island of Sodor, and first appeared in The Railway Series. Rheneas is painted red-orange, and has nameplates and the number 2 on each of his sides.

Rheneas was first featured in the fourth season, when Skarloey told the story of Rheneas' dedication saving the railway despite considerable obstacles. This dedication earned Rheneas extensive repairs, and he was touted as a hero on his return. Since returning, Rheneas has worked diligently on the Narrow Gauge Railway on Sodor.

This engine is first introduced to the TV Series as Falcon, working alongside Duke and Stuart on a line which has since closed. He has always been painted blue, and has a nameplate on each of his sides.

When Falcon was bought to work on the Skarloey Railway, he was given a new name, Sir Handel, and also given the number 3. In The Railway Series, he was also given a red coat of paint, however in the TV Series he retained his blue colour. He was also given a set of wheels with broad tyres, which the other engines referred to as his "steam roller wheels".

Sir Handel can be hot-headed and always has to have his way, which makes the trucks and coaches dislike him. Deep down, however, he seems to be quite a reasonable engine.

Sir Handel made his debut appearance in Season 4, but was not seen again until Season 10. In his returning episode, his absence was stated as due to working at the stone quarry all summer.[1] 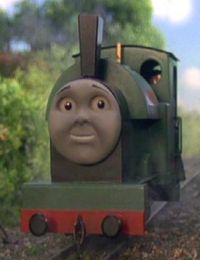 Peter Sam is a kind and well-mannered, green engine, with nameplates and the number 4 on both his sides. He is also known for his special funnel; following an accident with some trucks, his funnel became 'wobbly', and fell off when it hit an icicle in a tunnel. The replacement funnel was most strange-looking, and the other engines made fun of it until they discovered how useful it was.[2]

Peter Sam came from the same railway as Sir Handel and Duke, and was known there as Stuart. In The Railway Series, he was also given a red coat of paint, however in the TV Series he retained his green colour. He was bought to work on the Narrow Gauge Railway at the same time as Sir Handel, and often ended up apologising for his old friend's behaviour. Coaches and trucks alike found him polite and easy to get along with, so he quickly became a useful addition to the railway.

The first appearance of Peter Sam in the TV Series was in Season 4, and he has made appearances in every season (except Season 8) since.

Rusty is the only diesel engine on the Narrow Gauge railway. He was one of many engines to make the transition to the TV Series from The Railway Series, however his appearance is significantly different. In the TV Series, Rusty is mostly orange, whereas he was painted black in The Railway Series. He has a name plate and a number plate with 5 on it.

This little diesel carries out all the odd jobs on the Narrow Gauge Railway, from repairing the track to clearing up after accidents. He is a fearless and practical sort of engine, who is well respected by all. Even Duncan was forced to admit that Rusty has his uses.

Duncan is one of the more recent additions to the Narrow Gauge fleet, arriving as a spare engine while Skarloey was being repaired. Duncan is the tallest of the narrow gauge engines with his long funnel and high-roofed cab, which can make tunnels a tight squeeze. He is painted amber (but remained red in The Railway Series). Like his colleagues, Duncan has nameplates on both his sides, as well as the number 6. He speaks with a Scottish accent.

Peter Sam described Duncan as "bouncy and rude". He is a boisterous engine who likes nothing more than the opportunity to complain about something, indeed in Season 4 the narrator states that Duncan "likes to complain".[3] He is famous for "rock 'n' rolling" along the line, which has got him in trouble more than once such as the time he bounced so high he cause the end of a tunnel to collapse on him. He likes being polished and he hates being overworked, which he always feels he is.

Duncan first appeared in Season 4 of the TV Series, and reappears frequently, seemingly forgetting the lessons he had learned in previous seasons.

Duncan is based on the engine 'Douglas' on the Talyllyn Railway in Wales. Currently, the real version of the engine carries a character face, name and colour. 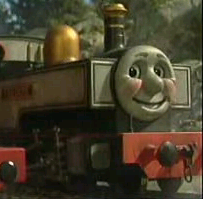 Fearless Freddie is an old grey warhorse engine who returned to the Thin Controller's Railway after many years. Although the reason for his absence is not stated, we can presume that Freddie was either on loan to another railway, or undergoing an extensive overhaul. He carries the Number 7, and has grey and red livery. He was close friends with Sir Handel during his earlier days.

Upon returning home, Freddie challenged Rheneas and Skarloey to a series of races up and down the mountain. Upon realising that he wasn't as strong as he once was, Freddie used his knowledge of the mountain routes and short-cuts to secure victories. However, when his cheating placed Rheneas in danger, Freddie was forced to put his knowledge to better use.

Freddie is competitive, but has since learned his lesson. He is now well respected by the younger engines on the Thin Controller's railway.

Fearless Freddie is based upon Russell, a locomotive found on the Welsh Highland Railway in North Wales. 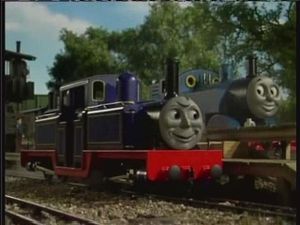 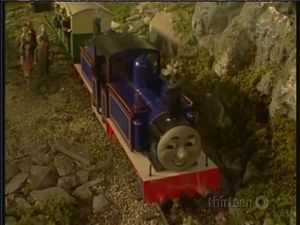 Mighty Mac is a Double-ended Fairlie locomotive, and the newest addition to the Skarloey Railway. Despite the opposing personalities of the two ends, they are technically one engine, painted a rich royal blue with gold and orange stripes. Mighty is the older of the two, and is distinguished by a small flick of hair. Mac is the younger half, and is distinguished by his youthful features and freckled cheeks.

Prior to their adoption into the Skarloey family, Mighty Mac had only ever worked in the shunting yards. Their lack of knowledge beyond their boundaries created much conflict between the two halves (for example, which end is in charge of doing what), which places themselves and their passengers in great danger whilst running an important errand. But with advice from Thomas in mind, they were able to complete their task and realise the value of working as one.

Mighty Mac made their debut in Series 9 of Thomas & Friends, in an episode of the same name. Since their initial appearance they have had a number of cameos, but have not been the featured characters in any subsequent stories. They have not appeared in The Railway Series books. 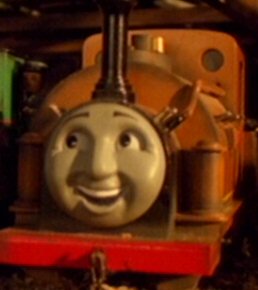 Duke is considered a hero among most of the engines on the Island of Sodor. He is a narrow gauge engine. Coloured light brown, his name is displayed on nameplates on both sides. He was named after the Duke of Sodor, and whenever anything went wrong he would exclaim, "That would never suit His Grace!"

Duke lived and worked on the now-closed Mid Sodor Railway with the engines Stuart and Falcon. He was the oldest engine on the line, and liked everything to be "just so". This prompted Falcon and Stuart to give him the nickname "Granpuff". When the railway closed, Stuart and Falcon were bought (and later renamed), but Duke was abandoned in his shed until, many years later, he was found. Duke now works on the Skarloey Railway.

The story of Duke was based upon a true story about an engine abandoned in the Brazilian rain forest. Duke himself is based on the engine Prince, a tender engine on the Ffestiniog Railway at Porthmadog, North Wales. Duke is also one of the few engines without buffers.

Duke was introduced in Season 4, but this is the only season to date in which he was featured. Smudger is a tank engine who worked on the Mid Sodor Railway, where Duke, Sir Handel (then called Falcon) and Peter Sam (then called Stuart) used to work. He usually showed off, and would often ride roughly and derail. He ignored Duke's warnings, which prompted the Manager to make him useful at last and turn him into a generator at the back of the engine shed. It is not known what happened to him after the Mid Sodor Railway closed.

Smudger was only seen in one Season 4 episode, "Granpuff". In the Railway Series, he is known as Stanley, with bright red livery and the number 2, and is an entirely different class of engine: apart from his dark-green color he is almost identical to the model used for Rheneas.

Bertram is an old tender engine who worked on a quarry on the far side on the Island of Sodor. He is known as the 'Old Warrior' because of his bravery. Toby found him whilst watching over the old mine, and has since then befriended him. He now works at the restored mines, taking passengers and children to the fairground within.

Bertram only appeared in the Season 5 episode 'Toby's Discovery' with no dialogue, and was built using Duke's body with Smudger's face and painted dark brown. He is based on Palmerston from the Ffestiniog Railway. According to Britt Allcroft, Bertram is supposed to be a tank engine, and the model crew made a mistake.

He was not seen since Season 5. 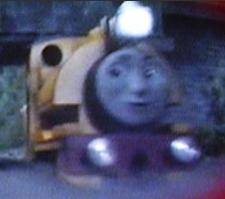 Proteus in The Magic Lamp

Proteus is a small bright yellow Narrow Gauge tank engine. He is a very special engine with a magic lamp hung upon his funnel. Legend has it if someone finds the lamp, their wishes are granted. Skarloey tells this story to the other Skarloey Railway engines, which then led to Peter Sam going up and down the line looking for the magic lamp.

Proteus was only featured in one Season 9 story, The Magic Lamp. He appears to have the same body as Sir Handel, which many believe is what led to the later's return in the show's 10th series.

His clues to find his magic lamp are feeling a rush of wind when the lamp is near, hearing a strange creaking sound, and see a flickering light that shines on and off, off and on.