The engines prefer coaches, which are smooth-running and well-behaved. The trucks, on the other hand, are nothing but trouble. In the words of Rev. W. Awdry:

– from the story Thomas and the Trucks (The Railway Series, book 2: Thomas the Tank Engine).

The trucks in the TV Series are often referred to as the Troublesome Trucks. This is because (as the name suggests) they can be quite troublesome, and love to play tricks on the engines who pull or push them. Not many engines like them, and they have been the cause of many accidents on the railway. Their behaviour could perhaps be best described in the following statement:

"Every wise engine knows that you cannot trust trucks."

There have, however, been some cases where the trucks and engines are on the same side, like in the episodes Special Attraction and World's Strongest Engine.

Incidents involving the Troublesome Trucks include:

Coaches are the rolling stock which are pulled by engines, to transport people (passengers) from one station to another.

Annie and Clarabel are two coaches who work with Thomas the Tank Engine on his branch line. Although they are old-fashioned, Thomas loves them very much and the three of them are quite inseparable. The coaches often ofter advice to Thomas been more experienced than he is. Although the coaches are usually pulled by Thomas other characters have been seen pulling them including Percy, Toby, Duck, Salty, James, Neville and Emily. Usually this upsets Thomas as he becomes very worried for the coaches safety.

Henrietta in Time for Trouble.

Henrietta is Toby's faithful coach. She worked with Toby the Tram Engine on their old railway, and when that line closed Toby could not bear to leave her behind. The stationmaster had wanted to turn her into a henhouse, but The Fat Controller agreed that "that would never do." The two are absolutely inseparable, and whenever they are apart they worry about each other. She carries passengers and is used to bring quarrymen to and from work. She has even been used as Sir Topham Hatt's private coach. Henrietta is the only named character not to have a face.

Henrietta is based on a Wisbech and Upwell Tramway four-wheeled coach.

Old Slowcoach is an elderly express coach who has seen better days. She was found in a scrapyard by Thomas and Percy, and was later refurbished to be used as a workman's hut. She wears the "chocolate and cream" paintwork of the Great Western Railway, upon which she was based before coming to Sodor.

She appears to be based on the Great Western Railway's clerestory coach stock.

Season 5 is the only season (to date) to feature Old Slowcoach.

The coaches on the Island of Sodor have many different designs throughout the series. Within the episodes themselves, coaches are rarely referred to specifically (unless specifying the engine who is pulling them, eg. "Emily's coaches").

The Express coaches are the coaches used most often within the series, and have two separate colour schemes. Other commonly used coaches include the coaches from the mail train.

Trucks (Usually referred to in American releases as Freight Cars) transport goods. There are various designs of trucks, which of course serve various purposes. Open-topped trucks carry most goods, however liquids are carried in tankers, and anything else which needs protection from the elements can be carried in trucks which have a roof.

S.C. Ruffey in "Toad Stands By"

S.C.Ruffey (pronounced ‘Scruffy’) is a Private-Owner ballast truck, and is regarded as one of the leaders of the Troublesome Trucks. After Oliver had been pushed down a turntable well, S.C.Ruffey led the trucks in singing rude songs about the accident. However, Oliver was able to pull S.C.Ruffey apart, effectively quelling his bad behaviour. S.C.Ruffey was rebuilt with a new body in the TV Series, but scrapped as a pile of broken pieces in the Railway Series his construction being rotten from the start.

S.C.Ruffey appeared in one episode in Season 4, 'Toad Stands By'. S.C.Ruffey's face has also been seen on other troublesome trucks, namely in 'Put Upon Percy' and briefly in 'Double Teething Troubles'.

The unusual spelling of his name is unique to the television series and related merchandise - in the original story in which he appears, his name is spelt as pronounced.

File:Hector.jpg Hector is a black hopper wagon with HECTOR written on it in white, and is introduced in Season 11. He roars at Thomas and Rosie, the two tank engines at the coal yards, scaring off Rosie. He felt scared to be loaded with coal and after Thomas showed him how fun it was, Hector let him load him and arrange him into trains for James and Edward.

The brake van is an important part of a goods train. It carries the guard and is equipped with a strong brake to assist with slowing and stopping the train. From here, the guard can keep an eye on the train in case of problems. In one season, some brake vans have faces.

The Spiteful Brakevan appeared in a single episode of Season 2, "Brake Van". He had taken a dislike to Douglas and delayed his trains until Donald told him off. Later, he held James's train back and Douglas had to help the train up the hill. However, whilst pushing the train from behind, Douglas crushed the brake van, whom was squashed in between Douglas and the heavy trucks. It is seen that he survived the accident, but not rebuilt. We can only assume that he was scrapped.

Spiteful Brakevan is based on a standard BR brake van, and has been released in ERTL model. In the Railway Series he has a different guise (grey paint and 'NW' painted on his side), and this guise was released in LC Wooden Toy.

Toad is Oliver's brake van, who was saved from scrap along with Oliver. He comes from the Great Western Railway, and has the greatest respect for engines. He is also one of the few well-behaved trucks on the railway. His last appearance was in Season 7 (to date) but was seen being pulled along with a long circus train by Thomas in a Season 8 episode, "Thomas & the Circus." However, his front cannot be seen, so only his back side is seen. 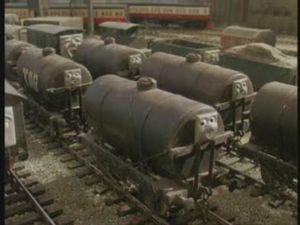 Tankers in "Toad Stands By"

These trucks transport large amounts of liquids. Tankers have been seen in the series designated to carry milk (Season 1), tar (Season 1), fuel (Season 3) and oil (Season 3), as well as cream (Season 8), jam (Season 9) and toffee (Season 10) later in the series. The trucks are usually faceless but have been seen with faces in Season 4. On the narrow gauge railway their tankers are used to carry gunpowder (Season 4).

This is the nickname for an early morning fish train, usually pulled by Henry. It is a fast train made up of various different vans. It has been at the centre of a number of events, the most famous of which is the occasion in which Henry crashed while pulling it in the first season, and had to be rebuilt. The Flying Kipper has featured a number of times since.

Rocky in Edward Strikes Out.

Rocky is the island's fifth named crane (after Cranky, Harvey, Butch, and Kelly from The Pack). He is painted burgundy with yellow hazard stripes, and is used as a rescue and maintenance unit. Although useful in any situation, Rocky can only move when there is an engine available to pull him, as observed by Gordon and Edward. Edward initially shunned Rocky for this reason - branding him 'new fangeled nonsense' - but following his help in the aftermath of an accident, Rocky has become a valued addition to the railway. He is usually the first choice when the lifting is too heavy for Harvey to handle. He is officially introduced in the Season 10 episode Edward Strikes Out, but had a cameo appearance in the earlier episode Big Strong Henry. Rocky apparently has taken the Breakdown Train's place on the Sodor Railway. Rocky also appeared in Season 11, Season 12, The Great Discovery and Hero of the Rails. 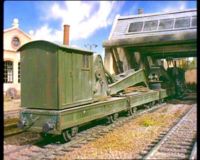 The Breakdown Train consists of flatbeds, rail-mounted cranes and a special coach. It is used for rescue and clear-up operations after accidents, but is also kept busy on maintenance, construction, repair and demolition jobs around the railways. It first appeared in the Season 1 episode Thomas and the Breakdown Train, and was used by Thomas to rescue James after an accident. In more recent seasons, the Breakdown Train has been pulled by Harvey. It is painted olive green.

In the Season 6 episode "Thomas and the Jet Engine", this piece of machinery was supposed to be delivered to the airfield. But Cranky the Crane carelessly knocked the "ON" lever with his hook, causing the jet to fire up and Thomas to be shot down the track at high speed. It is mounted on a large white flat truck, which also consisted of a red fuel tank and two large crates covered with tarpaulins.

The Chinese Dragon is a dragon who appeared in the season 3 episode Thomas, Percy and the Dragon. Thomas picked up this dragon at the harbour and scared Percy.