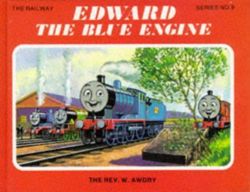 Edward the Blue Engine is a fictional anthropomorphic steam locomotive from The Railway Series by Rev W. Awdry, and the TV Series Thomas the Tank Engine and Friends. He is a blue 4-4-0 tender engine with red stripes, about the same size as James the Red Engine, and sports the number 2 on his tender. He is one of the major characters in both the books and the television series. 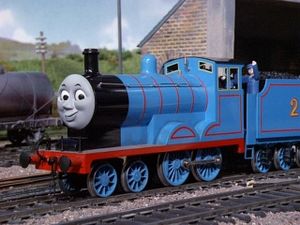 Edward the Blue Engine,
as seen in Thomas the Tank Engine and Friends.

He is a kind engine, who is always keen to help a friend in need. The younger engines can always rely on him to lend a listening ear and sympathetic advice. He works hard and will always do his utmost to get a job done.

However, the big engines tend to see him as old-fashioned and slow. It is true that he is the oldest engine on the Fat Controller's railway (indeed, he helped to build it), but he has proved time and time again that despite his age he is entirely capable of working as hard as any engine. Several of the stories revolving around him, both in the books and television series, have involved Edward proving his worth to the others. Two of the most notable were 'Old Iron', in which he earned himself an overhaul by capturing a runaway James, and 'Edward's Exploit', in which he brought home a special train despite a breakdown.

He has a branch line which he runs with BoCo the diesel. He is equally happy with coaches or trucks, but he has also been known to help other engines with heavy loads, pull special trains and even act as a pilot engine for the Royal Train.

Edward was first featured in The Three Railway Engines, Awdry's first book, in 1945. Edward featured in his own book, Edward the Blue Engine in 1954.

Edward is the only engine whose driver and fireman are named in The Railway Series (Henry's driver was named in the annuals, being 'Ted'). In the foreword to 'Edward the Blue Engine', their names are given as Charlie Sand and Sidney Hever, and in the story 'Saved from Scrap', Charlie's name is mentioned.

These names are puns on their jobs. One of an engine driver's jobs is to sand the rails when they are slippery in order to allow the engine to grip. A fireman's job is to "heave" the coal from the tender or coal bunker to the engine's fire.

Their first names come from a real engine crew named Charlie and Sidney on the Wisbech and Upwell Tramway (see Toby the Tram Engine).

Very little is known about these two men, but it may be assumed that they are retired by now.

Edward was the first character created for The Railway Series in 1943. The inspiration for the character came from Rev. W. Awdry watching trains on the Great Western Railway as a child. He said in interviews with Brian Sibley that to him, the noise of the locomotives' exhaust almost sounded like dialogue. For instance, the larger engines having trouble climbing the hills would appear to be saying, "I can't do it, I can't do it," and the smaller engines helping them would sound like they were saying, "I will do it! I will do it! I will do it!" This was the direct inspiration for the second story in 'The Three Railway Engines', 'Edward and Gordon'. The first story was 'Edward's Day Out', which was an introduction to the character.

Unlike later characters in the Railway Series, Edward is not directly based upon any particular class of locomotive, but is a generic Edwardian 4-4-0. Rev. W. Awdry has claimed that Edward is based on a heavily modified Sharp, Stewart & Co. Larger Seagull locomotive supplied to the Furness Railway in 1896, but this is a piece of retcon created for the book The Island of Sodor: Its People, History and Railways. Martin Clutterbuck notes that Edward bears a closer resemblance to certain Scottish locomotives of the North British Railway, notably the D20. It is likely that Awdry chose the Furness Railway locomotive because the Furness Railway was the closest mainland railway to Sodor.