Here is a list of characters that have appeared in Thomas and Friends movies.

Thomas and the Magic Railroad characters

Here is a list of the original locomotive characters to make appearances in the Thomas and the Magic Railroad film:

Here is a list of the new characters that appear in the film:

Diesel 10 is said to be the biggest and strongest diesel engine on Sodor.

Diesel 10 is the main villain in the film. He likes to cause chaos and scare the other steam engines. He was said to have been on the island before, and has returned to find Lady, who he almost managed to destroy. Diesel 10 did find her near the end of the film, but during a chase, he fell from a collapsing viaduct and was sent plunging down into a barge full of sludge. He did not make a reappearance until the full-length special, Calling All Engines. He was voiced by Neil Crone.

Diesel 10 in Calling All Engines

He also appeared as a character in the special, Calling All Engines, where he works mainly in the scrap yards, picking up scrap metal and dumping it into trucks. A lot of the steam and diesel engines were afraid of Diesel 10. He was later seen clearing tree branches from Gordon's Hill, where Thomas persuaded him to help clear the tracks at the airport. Although he is a very grumpy diesel engine, Diesel 10 agrees and helps to clean the wreckage, allowing Thomas to retrieve George to flatten the runway. Footage of Calling All Engines with Diesel 10 are seen in the season 10 intermissions.

Diesel 10 is based on a British Rail Class 42 with an ochre-colour paint scheme. He sports his overhead claw which he referred to in the first movie as "Pinchy" that he could use to grab things. Pinchy was not named in the second film. Diesel 10's sidekicks are (were): Splatter & Dodge. 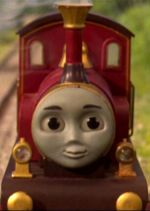 Lady is a purple-red golden tank engine. However once on Thomas the Tank Engine.com, Sir Topham Hatt once e-mailed somebody telling him that Lady was pink as when he asked are there any pink engines on the Island of Sodor.

Lady is what holds the Magic Railroad together. Because of this, she is kept hidden in Burnett Stone's workshop in Muffle Mountain after Diesel 10 made her crash. Stone repaired her, but she would not run. Eventually, his granddaughter Lily suggested using Sodor coal, which finally allowed her to make steam and return to the Island of Sodor. Diesel 10 found Lady, and chased her and Thomas. Thomas and Lady outran him, however, leaving him to his fate. It was found that Lady was the source of Mr. Conductor's gold dust. She was voiced by Britt Allcroft.

Lady in Calling All Engines

Lady later appeared in Calling All Engines. She appeared in Thomas' dream alongside Rusty, telling him how to get the airport finished. In the Calling All Engines DVD's Character Gallery, Lady is mentioned as "... a magical engine. When she works along the rails, she spreads gold dust along the rails. Lady has been known to help Thomas and his friends when there was no other engine to turn to..."

It is generally accepted that Lady's prototype is merely a fabrication. Throughout her appearances, she only has two facial expressions.

Splatter & Dodge are the two bumbling sidekicks of Diesel 10. He collectively refers to them as "Splodge" claiming that saying both their names takes too long. Although the other engines do fear them, they do not have the intelligence or villainy to match Diesel 10. Splatter is purple and more talkative than Dodge. Dodge is olive and more intelligent than Splatter. At the end of the film, the two abandon Diesel 10, forcing him to catch Lady on his own. The two are based on British Rail Class 08 shunters. Their whereabouts at the end of the film are unknown. Splatter was voiced by Neil Crone and Dodge by Kevin Frank.

Mr. Conductor is the railway conductor who often helps to run the railway for Sir Topham Hatt when he is not helping out at Shining Time Station. When Sir Topham Hatt goes on holiday, Mr. Conductor travels to Sodor to keep Diesel 10 in order, but he runs out of gold dust, and can't get back to Shining Time nor find out how to make more, leaving him powerless. He eventually finds a clue and when Burnett Stone travels to the island, his engine, Lady, provides him with gold dust. He was played by Alec Baldwin. The role is based on the character in the series Shining Time Station, previously played by Ringo Starr (Season 1) and George Carlin (Seasons 2-3).

Lily is the granddaughter of Burnett Stone. She lives in a big city, but comes to visit him during the film. After getting on the wrong train, she arrives at Shining Time Station, where she meets C. Junior. The station master, Stacy Jones, drives her to Burnett's home, and tells Lily that she wishes she could visit Shining Time. Lily meets Junior again, and they travel to Sodor. Later, she and Thomas find a way back to Muffle Mountain. She finds Lady and helps Burnett find a way to make her run and get to the island. She is played by Mara Wilson.

Burnett is Lily's grandfather and Lady's caretaker. He keeps her in Muffle Mountain. He was very sad when Lady crashed and he could not make her work again. He was even more devastated even more when his wife Tasha died. He couldn't get Lady to start until Lily got coal from the Island of Sodor. He did get Lady to work, and became her driver as they outran Diesel 10. He was played by Peter Fonda.

Mr. Conductor Jr. is Mr. Conductor's cousin, who was on holiday at the beach. Mr. Conductor urged him to travel to Shining Time Station. There, Junior met Lily, and they went to Sodor to find Mr. Conductor. They did find him at a windmill, but Junior became stuck on the windmill, and was flung onto the back of Diesel 10. He ended up in the scrap yard, flung onto James' cab. The two were nearly sent into the smelting pit, until Junior used his gold dust to transport them away. Junior then found Mr. Conductor, who told him that their gold dust was almost depleted. When Lady returned to the Island, he and his cousin found their gold dust again. He seems to like surfing. Junior is played by Michael E. Rodgers.

Patch is a local boy who works for Burnett Stone. He finds Lady and asks Burnett about her. Later he meets Lily and ends up with her until Lily departs for Sodor. The three of them later travel to Sodor in Lady. He was played by Cody McMains.

Mutt is Patch's dog, who tries to help Lily and can sense trouble in the world.

Billy is a train driver who works in the valley, driving trains to Muffle Mountain, Shining Time, and other places. He was played by Russell Means and previously played by Tom Jackson (Seasons 2-3).

There are no new locomotives in the feature length special Calling All Engines, and while many established characters appear, some only made cameos:

Dash & Bash are twins who work on Misty Island who help Thomas get home to Sodor. They are very mischevious and finish each other's sentences. Dash is yellow with a gray cab, and Bash is gray with a yellow cab.

Ferdinand is a big logging locomotive who tries to help Thomas to get back to Sodor. He can be described as a gentle giant. Ferdinand is blue-green.