NWR No. 5: James the Red Engine 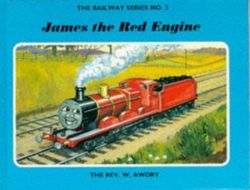 Book cover of James the Red Engine: book 3 in The Railway Series that features James. 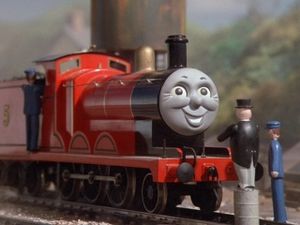 James the Red Engine, as portrayed in the TV series.

James the Red Engine is a fictional anthropomorphic tender locomotive from The Railway Series of childrens' books by the Rev. W. Awdry, and the spin-off TV series Thomas the Tank Engine and Friends. James is a mixed-traffic engine, which means he can pull coaches and trucks. He has a 2-6-0 ("mogul") wheel arrangement and is engine number 5 on the North Western Railway, the Fat Controller's railway on the Island of Sodor.

He first appeared in the Railway Series in 1946, in the book Thomas the Tank Engine. Books three and twenty-eight are dedicated to James.

In the stories, James crashed on his first day into a field. It was blamed on the wooden brake blocks he was given. James has a reputation for being naughty. Some of the incidents include breaking a coach brake pipe and needing a passenger's bootlace to fix it, crashing into tar wagons, and spinning on the turntable. Despite his behaviour, James is an engine proud of his red paint and is considered to be a really useful engine. He is similar in shape to Edward, except he has six driving wheels instead of four, and his cab is a different shape. He is one of the few engines allowed to pull the Express when Gordon is away.

He is very proud of his red paint and shining brass dome, and so likes to stay clean. He hates pulling trucks, and believes that he should only be used to pull coaches. He thinks himself superior to the other engines, and can be shallow, boastful and arrogant- particularly to Edward, and those engines who appear old-fashioned, weak, slow or dirty. However, on a number of occasions he has found himself forced to accept help from those he has insulted, and is ultimately apologetic.

James is one of the few characters to have their own song (James The Really Splendid Engine) in the TV series, the chorus of which is based on his theme music used in the early seasons.

In the Railway Series, James was for a long time one of the last engines to retain a prejudice against diesels. However, he was forced to admit in the book James and the Diesel Engines that there was nothing wrong with diesels as a whole, and this appears to be one of the few lessons that has stuck.

James first appeared in the Railway Series in 1946, in the book 'Thomas the Tank Engine'. He was painted black at this point. At the request of the publishers, Awdry dedicated the next book to the character. It was in this book that James received his red paint and his personality.

In the book 'The Island of Sodor: Its People, History and Railways', it is claimed that James is based on a rebuild of a Class 27 locomotive of the Lancashire and Yorkshire Railway, designed by George Hughes. However, as with most of the early Railway Series characters, this is a case of retroactive continuity.

Martin Clutterbuck has pointed out that the character also strongly resembles an Austrian Goods engine of the Glasgow and South Western Railway, and Awdry himself used an engine of this class to represent James on his model railway. As with Edward, it is possible that he rejected this prototype for the character's official "biography" on the grounds that an English locomotive would be geographically more likely to end up on Sodor.

Thomas and the Magic Railroad

Susan Roman voiced James in the film, Thomas and the Magic Railroad. He was briefly threatened by the evil Diesel 10 before being teleported out by Mr. Conductor Junior (Michael E. Rodgers).

James in the Guinness Book of Records

A large scale working replica of James (along with Thomas, Percy, Harold and Jack) was created by BBC Visual Effects (UK) for a 2003 live stage show tour. This battery powered locomotive is listed in the Guinness Book of Records as the largest model railway engine ever built, at 2.64 x 1.5 x 6.52 metres.[1] 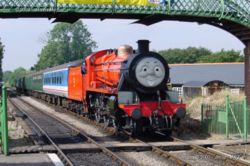 The Mid Hants Railway repainted one of its engines- a Southern Railway N class- into the livery of James. The engine retained this colour scheme for many years, and participated in the Railway Series golden jubilee celebrations at the National Railway Museum. This engine was the only replica Thomas character to be certified to run on the main line.

It created a certain amount of controversy among railway enthusiasts, who felt that it was inappropriate to paint a historic main line locomotive in such a garish livery. Nonetheless, the locomotive was popular with the railway's younger visitors.