Donald and Douglas are characters from The Railway Series by W.V. Awdry and its spinoff TV series Thomas the Tank Engine and Friends. They are Scottish twin engines. The Fat Controller originally only ordered one engine from Scotland, but was surprised when two arrived, neither with numbers or any distinguishing features - both engines were painted completely black. He could not tell which engine was which, and so decided to keep whichever one was the more useful. Unfortunately, Donald managed to demolish a signal box and Douglas destroyed a spiteful brake van by mistake.

However, the twins proved their worth to the railway in winter, when their experience and expertise with snow made them excellent snowplough engines. The other engines appealed to the Fat Controller in "The Deputation" and he decided to keep the both of them. In the Railway Series, they were painted blue shortly afterwards and given nameplates.

The twins are almost identical, and some episodes of the television series have even depicted them as being inseparable. The reason for their both arriving on Sodor was that they were escaping from scrap, and could not bear the thought of one being saved and the other not. As their crews were also related, it was not difficult to put the plan into action. To allow the engines to be told apart, the Fat Controller ordered that numbers be painted on their tenders. Following an incident in which the engines swapped tenders, he decided that it would also be wise to give them nameplates on their boilers as well. 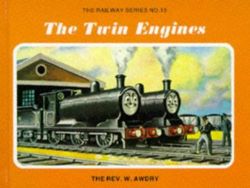 Donald and Douglas first appeared in 1960, in the Railway Series book The Twin Engines.

Donald and Douglas are popular among the other engines, not only for their versatility but also their practical and friendly demeanour. They enjoy a good joke, as exemplified when Duck's driver slipped a duck into Donald's tank, resulting in Donald gaining a new friend in Dilly the duck. They put their all into any job, no matter how difficult. And, because of their own brush with scrapping, they have the utmost sympathy for engines escaping the scrapyard. It was this sympathy that made Douglas assist Oliver and Toad in escaping to Sodor. In the Railway Series, Toad became his brake van following this incident.

The Twins are mainly used for goods work, but can be used for all sorts of jobs all over the railway. They are very much the "odd job engines" of the line. They carry out track repair, collect engines from the Works, rescue engines that have broken down or crashed and, of course, clear snow in the winter. The railway would not be the same without them. They are, in the Fat Controller's words, "Really Useful Engines".

They first appeared in the book The Twin Engines, published in 1960. Their first appearance in the television series was in Season 2.

Donald and Douglas are unusual among characters in the Railway Series, in that they speak in a strong Scots dialect. This can be difficult to understand at times (and indeed, Rev. W. Awdry received a number of letters complaining of this very problem). This is exemplified in their excuse for not carrying numbers: "They maun hae slyly slippit aff, sir!"

Their accent has been identified by a number of readers as originating in Glasgow, although the writer Martin Clutterbuck notes a strong Robert Burns influence.

The engines' Scottish heritage has been referenced in a number of stories. In the book Stepney the "Bluebell" Engine, Douglas mentions the song 'The Bluebells of Scotland'. [1] While in Jock the New Engine, Douglas regards the unnamed engine's unusual colour (undercoat): "Some o' the engines up in the Highlands were yon colour. Jocks, we used to call them." He goes on to suggest that "Jock" might be a good choice, and so the title character gets his typically Scottish name, and is painted in the distinctive pale green livery of the Highland Railway. [2]

It should be noted that in "The Railway Series", Donald and Douglas were painted NWR blue when Sir Topham Hatt (the Fat Controller) decided to keep them; however, in the television series they remained black.

Donald and Douglas are based on the Caledonian Railway 812 Class. In the Railway Series, it is stated that one of them is number 57646 (though it is only revealed to the reader that this is in fact Donald, when Douglas has the alarming thought "I hope the Fat Controller disnae realise I shouldna be here"). None of the original 812 class carried this number — the joke being that in real life, the highest numbered was 57645.

The blue they carry in the Railway Series is significant, as blue was the colour most associated with the Caledonian Railway. In the book 'James and the Diesel Engines', Donald explains that while on the Caledonian Railway they were never painted blue, they always carried the black goods livery.

The engines have deep-toned whistles, which Gordon and Henry observed made them sound like buses or ships. Although unusual on Sodor, such whistles were typical of the Caledonian Railway.

Douglas on the Mid Hants Railway 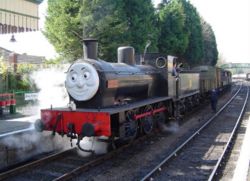 In 2000, the Mid Hants Railway in Hampshire converted a Hunslet Austerity 0-6-0ST class engine into a tender engine. This rebuilt locomotive poses as Douglas for special events.