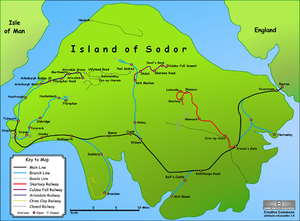 A map of the Island of Sodor showing the Railway system (click to enlarge). 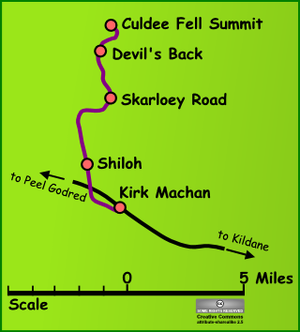 A map of the Culdee Fell Railway

The Culdee Fell Railway (CFR) is a fictional railway on the Island of Sodor in The Railway Series of children's books written by the Rev. W. Awdry. It is based on the Snowdon Mountain Railway, and is a steep rack and pinion railway high in the mountains of Sodor. The line runs from Kirk Machan, where it meets the standard gauge line from Killdane to Peel Godred, to the summit of Culdee Fell. Devil's Back is a high exposed ridge which the railway runs along, corresponding to Clogwyn of the real Snowdon Mountain Railway.

The CFR is popular with tourists and runs from Easter to Michaelmas, maintenance being undertaken in the winter.

The railway can be reached by the Peel Godred Branch of the North Western Railway.

The Culdee Fell Railway has only appeared in the book Mountain Engines, the nineteenth volume in the Railway Series.

The locomotives on this line push a single coach uphill, but the engine is not coupled to the coach. The CFR engines all carry the same purple livery, but each has its own distinctive personality. The book features three of these engines, whilst the others are only mentioned in passing.

According to "research" by Rev. W Awdry, the railway was the brainchild of the tourist Mid Sodor Railway. Construction started in 1897; the line was inspected in March 1900 and opened to the public on Whit Monday, but after just a month one of the locomotives was destroyed when it derailed and fell down a cliff. The line remained closed until the following season whilst improvements were made. 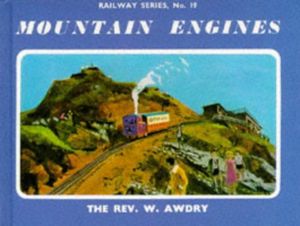 Mountain Engines book cover, showing Culdee and Catherine (the coach) starting the descent from Summit Station, with the peak of Culdee Fell visible to the left.

The locomotives of the Culdee Fell Railway are all 0-4-2 tank locomotives with angled boilers, stovepipe chimneys and back-to-front cylinders. They have pinion wheels on their driving axles that allow them to climb the steep mountain and prevent slipping. They are also fitted with automatic brakes.

Lord Harry, Alaric and Eric are newer, more modern engines. They are fitted with superheating to improve their steaming efficiency.

All the locomotives carry a purple livery, lined out in orange.

Unusually, they carry faces on the back as well as the front. This measure was used by Gunvor and Peter Edwards, the illustrators of the book Mountain Engines, as the engines would spend a lot of the book with their fronts obscured.

The North Western Railway's Crovan's Gate Works are now responsible for major repairs on the Culdee Fell Railway's engines. Previously, engines requiring overhaul had had to be sent to their manufacturer in Switzerland, a long and expensive journey.

Godred was based on the Snowdon Mountain Railway No. 1, L.A.D.A.S.. Godred suffered a similar fate to L.A.D.A.S which came off the rails on its maiden voyage. The fate of Godred is debatable – although the tale as recounted by Culdee (in the story 'Bad Look-Out') claims that he was dismantled for spare parts, at the end of the story it is stated that Culdee had made the whole thing up. However, all other canon sources support Culdee's version of events, leaving the reality uncertain.

The most likely real world explanation is that the Rev. W. Awdry wished for his fictional railway to mirror its real life counterpart as closely as possible. However, as this would involve the "death" of a character, he chose to end it as he did in order to avoid causing distress to his readers.

Ernest (number 2) has only a minor part in The Railway Series, being mentioned in the book Mountain Engines.

Wilfred (number 3) has only a minor part in The Railway Series, being mentioned in the book Mountain Engines.

According to The Real Lives of Thomas the Tank Engine, he and Ernest have been "retired".

Culdee (number 4) is named after Culdee Fell, the mountain his railway climbs.

He is a friendly engine, and has a lot of good advice for the other engines. He is very careful, and has never had an accident. He was one of the first engines on the line, having been built in 1896, and was used in early test runs on the line. He was also one of the last mountain engines on Sodor to travel to Switzerland for overhaul.

His first and only appearance was in the book Mountain Engines (1964), in which he acted as a narrator and supporting character.

Shane Dooiney (number 5) is the only Mountain Engine never to appear in the stories. He was still being overhauled in Switzerland during the events of the book Mountain Engines. His name was not even revealed until the publication of the book The Island of Sodor: Its People, History and Railways. Like Culdee, he is named after a mountain on Sodor. Since his return, all repairs to the engines have been carried out at Crovan's Gate Works.

Lord Harry (number 6) was known as a rude and ignorant trouble-maker on the Culdee Fell Railway. The fact that he was named after Lord Harry Barrane (the chairman of the railway company) and his ultra-modern superheated design made him conceited and led to a habit of unneccessary risk-taking. After scaring his coach, and derailing at the summit station, blocking both roads, he was sent to the sheds in disgrace by the manager, Mr. Walter Richards. He was stripped of his name and was known only as "No 6". Passengers refused to trust him and he was reduced to the level of goods engine, transporting hotel supplies and ferrying railway gangers to and from work. After rescuing an injured climber at the mountain summit by pushing a truck up Devil's Back in a severe gale, he was regarded as a hero and renamed Patrick, the name of the injured climber.

Alaric (number 7) replaced Ernest on the railway and has only a minor part in the series. He is built to a 'super-heat' design.

Eric (number 8) replaced Wilfred on the railway and has only a minor part in the series. He is built to a 'super-heat' design.

Catherine is a coach on the Mountain Railway who operates with Culdee. Like the other coaches on that line, she is pushed up the mountain, not coupled to the engine for safety reasons. She looks out for Culdee on the way up, as he cannot see ahead. She is safety-conscious, and Lord Harry upset her with his risk-taking when he worked with her.

She is the only CFR coach to be named in the stories.

The Truck is a special item of rolling stock used for goods and maintenance duties on the Mountain Railway. She is also used for stores and rescue trains, as she is the only rolling stock capable of crossing the fearsome Devil's Back Ridge during a gale. For these trains, she is loaded with sandbags and her tank is filled with water to increase her weight. Although she is not allocated to any specific engine, there was a period when she worked exclusively with Lord Harry when the Manager took that engine off passenger trains.

Although she has no name, "the Truck" is always spelt with a capital T.

Lord Harry Barrane appears in the book: Mountain Engines. He is chairman of the Culdee Fell Railway company.

Television and Other Media

Merchandise has been produced based on the Mountain Engines, particularly Godred, Culdee, Lord Harry and Catherine.