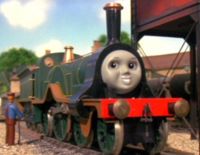 Emily is a fictional, anthropomorphic steam locomotive from the television series Thomas and Friends. She is the only female member of the "Steam Team", the eight core characters of the series, and was the first female steam engine to be featured in the series. Emily is painted dark green and has large driving wheels and a shiny brass dome, of which she is very proud.

When she first arrived on the Island of Sodor, she took Thomas's coaches Annie and Clarabel by mistake, much to Thomas's dismay. However after she rescued Thomas and Oliver from an accident, Thomas forgave her. The Fat Controller rewarded her with two coaches of her own.

From Season 8 onwards she has been depicted as a rather bossy character, which can make her difficult to work with at times. She is sometimes a 'big sister' figure to smaller engines like Thomas and Percy. It is hinted though that Thomas might have a crush on her. And it's unknown if she would return the feelings.