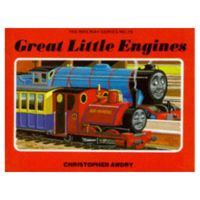 Sir Handel, alongside Gordon on the cover of Vol. 29

Sir Handel can be badly behaved at times and is very prone to temper tantrums when he doesn't get his own way. He has also been known on at least two occasions to pretend to be ill in order to avoid work, but this usually backfires on him. He is not popular with the trucks, and they often play tricks on him. Generally, he feels that he should only pull coaches.

He was originally called Falcon and lived on the Mid Sodor Railway with Duke and Stuart. When the railway closed, he and Stuart were sold to the Sodor Aluminium Company, and then later to the Skarloey Railway, where he was renamed and given a red coat of paint.

He had problems with staying on the track, so he was fitted with a set of wheels with wide tyres, nicknamed "steamroller wheels" by the other engines. He was taken to pieces for a television program when he pretended to be ill. Later, he was sent to the Talyllyn Railway in Wales when one of their engines needed repairs. Most recently, he caused trouble for the Thin Controller by deliberately damaging his firebox.

Sir Handel was renamed after the founding member of the Skarloey Railway, and doesn't get on well with either trucks or coaches (although he eventually befriended some in the original books and TV series).

Sir Handel is based on the locomotive Sir Haydn which works at the Talyllyn Railway in Wales. This locomotive was built by Henry Hughes & Co at the Falcon Works in Loughborough in 1878, one of three identical locomotives for the 2 ft 3 in (686 mm) gauge Corris Railway in Merionethshire. Nos. 1 and 2 were scrapped in 1930 and No.3 worked until the Corris Railway closed in 1948, hauling the last train on 20th August that year. After three years covered by a tarpaulin at Machynlleth Station No. 3 was purchased (and named) by the nearby Talyllyn Railway in 1951. The original cab was replaced in the 1960s, and this change can be seen in the TV version of "Sir Handel". "Sir Haydn" the real locomotive is named after Sir Henry Haydn Jones former owner of the Talyllyn Railway and the person upon whom the owner of the Skarloey railway is based.

In the 1980s, the Talyllyn Railway repainted Sir Haydn to represent Sir Handel. Christopher Awdry wrote this into the 1985 book Great Little Engines, explaining that Sir Handel was visiting the line to help out. An incident in which Sir Haydn ran into a tree branch and was given a bandage and eyepatch was turned into a story in the book, with almost no alteration from the real event.