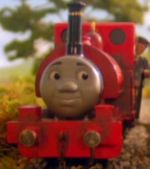 Skarloey is a fictional locomotive from The Railway Series by Rev. W. Awdry. He is one of the oldest engines on the Island of Sodor. Skarloey lives and works on the Skarloey Railway as Engine No.1.

This article discusses Skarloey from the point of view of the Railway Series. For information on Skarloey in the TV Series Thomas the Tank Engine and Friends, see this page.

Skarloey came to the Island in 1865. At first he was badly behaved and refused to pull trucks. He also had a habit of "bucking", which was cured by adding an extra pair of wheels. At the same time, he received a cab, which made him more conceited. But after his brother Rheneas rescued him following an accident, he learned the error of his ways.

Since then he has become a hard worker - at one point he worked so hard that he became quite ill, leaving Rheneas with the responsibility of running the line on his own until Sir Handel and Peter Sam arrived. When he was repaired, he went straight back to work. He mainly pulls coaches, and he is the engine usually put in charge of special trains, and is affectionately nicknamed "the Little Old Engine". He was also once the subject of a television programme, along with Rheneas and the other engines of the Skarloey Railway. Skarloey is based on the locomotive Talyllyn which works at the Talyllyn Railway in Tywyn, Wales.