From TrainSpottingWorld, for Rail fans everywhere
Jump to:navigation, search
This article or section does not cite its references or sources.
Please help improve this article by introducing appropriate citations. (help, get involved!)
This article has been tagged since November 2006. 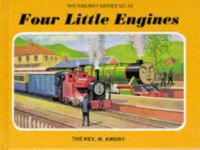 Peter Sam with his original funnel, alongside Henry

Peter Sam is a fictional locomotive from The Railway Series by Rev. W. Awdry and the children's TV series Thomas the Tank Engine and Friends. Peter Sam lives and works on the Skarloey Railway on the Island of Sodor as Engine No. 4.

Peter Sam first appeared in The Railway Series in the story Sir Handel. This story is set just after Peter Sam and Sir Handel had been purchased by The Thin Controller. Peter Sam (originally named Stuart on the Mid Sodor Railway) was renamed and given a coat of red paint (However, he remained green in the TV Series).

Peter Sam holds a lot of respect for Skarloey, and often tries his best to prevent Sir Handel from getting into trouble. He is a friendly engine who aims to please, and is highly regarded by coaches and even trucks. He often works with the Refreshment Lady who runs a Tea Room at Crovan's Gate Station where the standard gauge and narrow gauge lines meet.

After an accident on the incline when collecting slate trucks, Peter Sam had difficulty steaming. His funnel was knocked off in a tunnel by an icicle. He was soon fitted with an experimental funnel (a Giesl ejector) which enables him to take heavier loads. At first, the others teased him for it, but Peter Sam is now considered a part of the team.

Peter Sam is based on the locomotive Edward Thomas which works at the Talyllyn Railway in Wales. This locomotive is a modified "Tattoo" class, built in 1921 by Kerr Stuart & Co at the California Works in Stoke on Trent for the 2 ft 3 in (686 mm) gauge Corris Railway in Merionethshire, where it also carried the number 4. After the Corris closed in 1948 it was purchased (and named) by the Talyllyn in 1951. A new "Tattoo" class loco commenced work on the Corris Railway in 2005.

This caused some controversy when Egmont, the publishers of the Railway Series books, complained that this was a violation of copyright. A compromise was eventually reached whereby the Talyllyn Railway could run engines as Railway Series characters, but the faces attached to them had to be different to those depicted in the books.