The NZR Q class, the locomotive that started it all. 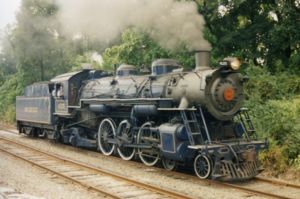 Under the Whyte notation for the classification of steam locomotives, a 4-6-2 locomotive has four leading wheels (generally arranged in a leading truck), six coupled driving wheels and two trailing wheels (often but not always in a trailing truck).

The equivalent UIC classification is 2'C1'.

Swiss composer Arthur Honegger wrote his symphonic poem Pacific 231 in honor of the locomotive, using the French designation 2-3-1, counting by axle instead of wheel.

In the United States and Britain, the 4-6-2 locomotive type was named the Pacific as the first locomotives of the style were shipped across the Pacific Ocean to New Zealand.

New Zealand Railways (NZR) was the first to purchase and operate a proper 4-6-2 wheel arrangement in 1901, with the order for 13 Q class locomotives being placed with Baldwin. Upon completion, the locomotives had to be shipped across the Pacific Ocean to New Zealand, hence the name. The reason for the design was that a locomotive with a large firebox was required to burn poor lignite coal from the South Island. So it was the NZR Chief Mechanical Engineer, A. L. Beattie, who ordered the first true Pacific. There are some known examples of Pacifics prior to 1901, but these were rebuilds of 4-6-0s and were not designed as Pacifics at the time of their original construction. In 1915 NZR built the (reputedly) first steam locomotive to develop 1 hp for 100 lb of engine weight.[1] It was a New Zealand built and designed Pacific and was designated the Ab class.

It should be noted that some sources incorrectly state that the term Pacific stems from early examples of the 4-6-2 type of locomotive being built for the Missouri Pacific Railroad. The correct explanation of the name is the New Zealand one.

The success of the 4-6-2 design can be attributed to the presence of a four-wheel leading truck, which made for stability at speed; six driving wheels which allowed for the application of more power compared to the earlier 4-4-2 "Atlantic" design; and a two-wheel trailing truck which permitted the firebox to be behind the high driving wheels, allowing it to be both wide and deep. On a locomotive without a trailing truck such as a 4-6-0 "ten wheeler", the designer is caught in a dilemma; the firebox can either fit between the driving wheels and be narrow and deep, or it can fit above the driving wheels and be wide and shallow.

The Pacific was further developed into the 4-6-4 "Hudson", with a four-wheel trailing truck permitting a still larger firebox (but reducing adhesive weight), and into the 4-8-2 "Mountain", with an extra pair of driving wheels giving more traction, and thus able to transfer more power.

Pacifics were the predominant steam passenger power in America in the twentieth century. Few railroads did not roster 4-6-2 locomotives as premier passenger power, although they were supplanted in top-flight service on many roads later on by larger 4-6-4 "Hudson", 4-8-2 "Mountain" or 4-8-4 "Northern" locomotives as train weights increased.

Approximately 7000 locomotives of this wheel arrangement were produced for U.S. and Canadian railroads. The largest user was the Pennsylvania Railroad, which had a total of 697 Pacifics, including 425 class K4s, the largest single class of locomotive ever built in the United States (they claimed worldwide, but this is unlikely to be true given huge fleets of identical German, Russian, and Chinese locomotives).

One notable 4-6-2 was preserved and has been restored to operating condition for excursions. Soo Line 2719 hauled the last of Soo Line Railroad's steam-powered trains in 1959. It was restored beginning in 1996 and today is operated for excursion runs primarily in the Midwest United States. 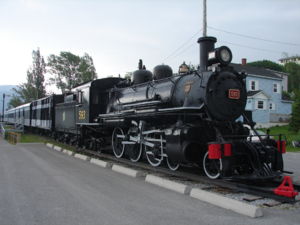 The Humbermouth Historic Train Site in Corner Brook, Newfoundland, Canada includes a non-functional Baldwin Pacific Class 4-6-2 steam locomotive as part of its collection. The engine was built in 1920 in Philadelphia, acquired by the Reid Newfoundland Company Ltd., and later transferred to the Newfoundland Railway. The engine was originally designated "193" and later renumbered "593". 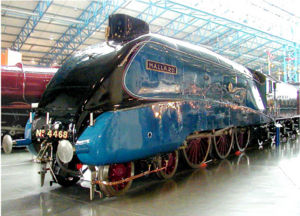 The Mallard, holder of the world speed record for steam traction.

4-6-2s were built by all of the four pre-BR railway companies (although the Great Western Railway built only the one example, also the first Pacific in Great Britain, No. 111 The Great Bear). A number of British Pacifics were notable for setting officially recorded world speed records for steam traction.

The LNER built some of the fastest and most famous examples. The GNR A1 Class (later rebuilt into the A3) featured three cylinders and the innovative Gresley Conjugated Valve Gear, and No. 4472 Flying Scotsman was the first officially recorded British locomotive to reach 100mph (161km/h). This speed was surpassed by the streamlined A4 class, with record performances by No. 2509 Silver Link (reaching 112mph (180km/h) on its inaugural run in 1935) and No. 4468 Mallard touching 126mph (203km/h) on 3rd July 1938, which is the world speed record for steam traction.

The London, Midland and Scottish Railway also built some fast Pacific locomotives, with the Princess Coronation Class briefly holding the British speed record for steam traction when No. 6220 Coronation reached 114mph (183km/h) on 29th June 1937. The LMS Princess Royal Class was also used as the basis for an unusual experimental locomotive, The Turbomotive.

After World War II, the Southern Railway introduced a number of highly innovative designs, including the Merchant Navy Pacific and the West Country and Battle of Britain Classes.

After the formation of British Rail in 1948, plans were drawn up for new standard locomotive classes, including the Standard Class 7 Pacifics (known as the Britannias). These locomotives were a simple expansion two cylinder design featuring Walschaerts valve gear, their conservative design reflecting a requirement for a more cost effective, lower maintenance locomotive. The final Pacific design in the UK was No. 71000 Duke of Gloucester, built in 1954. It used many parts common to the Britannias, but featured three cylinders and Caprotti valve gear.[2]

All German 4-6-2s were express passenger locomotives with large driving wheels (average between 1.8 and 2.2 m high). They were the BR 01 (twin cylinder standard type of Deutsche Reichsbahn, BR 02 (four cylinder compound prototype), BR 03 (lighter version of BR 01), BR 10 (only two prototypes built by Deutsche Bundesbahn and the BR 18 (pre WWI locomotives of the different state railway companies) with its many subclasses (e. g. BR 18.4, formerly S 3/6 from Bavaria). Some were streamlined, such as the subclasses BR 01.10 and BR 03.10, with three cylinders instead of two plus streamlining, increased maximum speed).

The only application of this wheel arrangement in Austria was in tank locomotives of class 629, built from 1913 on. This highly successful type remained in service until 1975.

Twenty-two Pacifics (classified Hr1 and known by the nickname Ukko-Pekka, after Finnish President Pehr Evind Svinhufvud) were constructed in Finland by Tampella and Lokomo between 1939 and 1957. They were the largest passenger locomotives built or used in Finland and remained the primary locomotives used for express trains until 1963, when diesels overtook them.

In the late 1920s, heavy Pacific locomotives were introduced by both South Australian Railways and Victorian Railways in response to increasingly heavy passenger trains and demand for faster services. Although similar in size, power, and top speed, the designs adopted reflected different approaches to a similar problem. The SAR 600 class reflected contemporary American locomotive practice both in design features and appearance, with two large 24 x 28 in (610 x 710 mm) cylinders. The VR S class showed a strong British LNER influence, with three 20½ x 28 in (521 x 710mm) cylinders and Gresley Conjugated Valve Gear driving the third (inside) cylinder.[3]

The New South Wales Government Railways introduced the C38 class for express passenger service in 1943. These two cylinder Pacifics featured a free-steaming 245 psi boiler and were renowned for their performance. Class leader 3801 has achieved considerable fame in preservation, with notable feats such as a transcontinental journey from Sydney to Perth in 1970.

In the post-war era, Pacifics were also introduced on narrow gauge Australian railways, with the Tasmanian Railways M class and Queensland Railways BB18¼ class. BB18¼ No. 1089, built in 1956, is notable for being the last mainline steam locomotive built in Australia.[4]

South Africa with its 3 ft 6 in (1065 mm) gauge network has the distintion of operating a 4-6-2 locomotive with the biggest driving wheels on any narrow gauge system in the world. The Class 16E variant drivers were 6 ft (1828 mm) in diameter and had Poppet valve gear. These six engines were inservice from 1935. One engine clocked a speed at 85 mph These locomotives retired in 1975 though, preserved engines operated on specials until the end of steam in 1990.

The other Class 16 variants with 4-6-2 drivers were not as large or as fast as the Es.

A second smaller Class 10 locomotive of the 4-6-2 arrangement operated on the SAR from 1910.