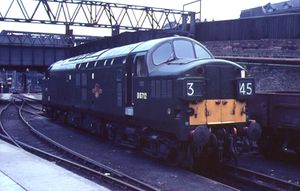 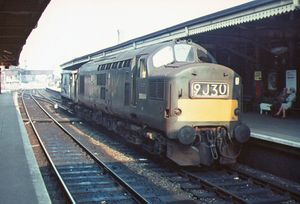 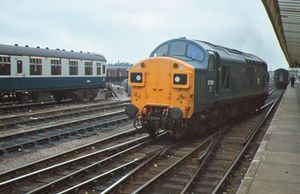 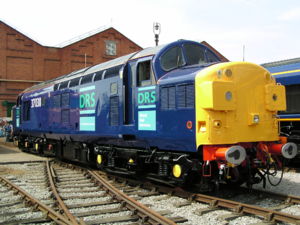 Class 37/0, no. 37038 at Crewe Works on 1st June 2003. This locomotive had recently been purchased by Direct Rail Services, whose blue livery it carries.
File:37411 'The Scottish Railway Preservation Society' at Carlisle.JPG
Class 37/4, no. 37411 "The Scottish Railway Preservation Society" at Carlisle on 27th August 2004. At the time, this EWS-owned locomotive was hired to Arriva Trains Northern for services over the Settle-Carlisle line.
File:37674 'Saint Blaise Church 1445-1995' at Westbury.JPG
Class 37/5, no. 37674 "Saint Blaise Church 1445-1995" at Westbury on 16th April 2004. This locomotive is owned by EWS and still carries the obsolete Trans-Rail livery. It is currently stored, but could be reinstated with relative ease if required. 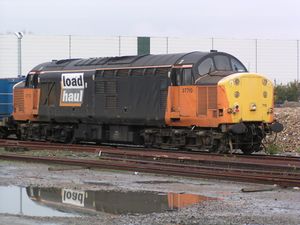 The British Rail Class 37 diesel locomotives, also known as the English Electric Type 3, were commissioned as a part of the 1955 British Rail modernisation plan. In total 309 were built, with the order split between English Electric's Vulcan Foundry at Newton-le-Willows and Robert Stephenson and Hawthorns, Darlington.

The Class 37 became a familiar sight in many parts of the British Rail network, for example, forming the main motive power for Inter-City services in East Anglia, within Scotland, and so on. They were relatively rarely seen on the more 'glamorous' main line expresses, but on secondary and inter-regional services they performed well for many years.

In the 1980s many locomotives were refurbished, which has meant the Class 37 fleet is one of the longest surviving classes on British railways. However, the introduction of new Class 66 locomotives has meant many locomotives have been withdrawn or scrapped. The last few British examples are operated by EWS and Direct Rail Services, who retain small fleets, with several examples also operated by spot-hire companies. However, second-hand Class 37s have also proved popular in the export market, with some examples currently operating in Spain and France (serving the construction of these countries' high-speed railway networks).

The Class was designed for both passenger and freight work and was as much at home hauling heavy goods trains as it was on passenger services (indeed, the Western Region even tried modifying some of its 37s for 100mph operation in 1966). Many of the original locomotives were fitted with boilers for steam heating. With the withdrawal of many Type 2 and Type 3 locomotives in the 1980s the 37s were selected as the standard Type 3 and many of the fleet were heavily overhauled to prolong their life into the 1990s and beyond. Some were fitted with electrical train heating equipment in the 1980s to become 37/4 sub-class, initially for use on the West Highland Line, but later seeing use in other parts of the country.

A number of locomotives were rebuilt as Class 37/9 in the late 1980s to evaluate Mirrlees and Ruston engines for possible use on a new Class 38 freight locomotive. These 'Slugs' were heavily ballasted to improve traction and had excellent load-hauling capabilities, but the Class 38 (understood to be a 'modular' locomotive based on the approach that gave rise to the Class 58 and the unbuilt Class 88 electric loco) was never built.

The Class 37 has a relatively low axle loading for its size and power. With the withdrawal of most of the smaller types of diesel locomotive, this left them as the only mainline type available in significant numbers for lines with weight restrictions, and for a number of years they handled almost all locomotive-hauled services on the West Highland Line, the lines north of Inverness (Far North Line) and in parts of Wales.

Direct Rail Services operate around twenty Class 37s. They haul nuclear trains, and during autumn have also seen use on sandite trains on behalf of Network Rail. DRS locomotives tend to be used in pairs as a precaution in case one fails en route.

DRS also have several more non-operational Class 37s, which are in store, or undergoing overhaul.

EWS currently operates a small fleet of four Class 37/4 locomotives, currently consisting of 37405, 37406, 37410 and 37417. They are based in Scotland at Motherwell TMD, working trip freights such as the Edinburgh Powderhall Binliner.

They retained some passenger duties into 2006, one being used on First Scotrail's Caledonian Sleeper service over the West Highland Line up until June 2006 (they have continued to deputise occasionally for Class 67s since then). Another was hired to Arriva Trains Wales for weekday peak hour use on the Rhymney Line up until December 2006.

In addition to the above, EWS own a large number of non-operational 37s which are stored at numerous locations around Britain (plus a few in Spain following a hire contract). Many are considered suitable for re-activation at relatively short notice. During 2006 two Class 37/5 locomotives were temporarily re-activated for use on ballast trains on the Heart of Wales Line for Network Rail.

As of January 2007, the fleet of EWS 37/4 locos in Scotland are still at work, notably on some sleeper trains (between Edinburgh and Aberdeen) and also on snowplough standby duties in Inverness and/or Aberdeen. The 'Edinburgh Binliner' still sees the class operate. It remains to be seen whether the class will still be operational at the end of 2007.

EWS has also recently put several Class 37 locomotives (amongst other types) up for sale.

Eurostar (UK) Ltd. (at the time European Passenger Services) initially had twelve locomotives modified as Class 37/6, with the intention that they would haul international night trains over the non-electrified parts of their routes in Britain. However, these services were never introduced, and nine of the twelve 37/6s were subsequently sold to DRS. Eurostar (UK) retained three, which have been put to other uses, including: rescuing failed Eurostar sets; moving Eurostars over non-electrified routes; driver training, and route learning.

ATW used these trains regularly for commuter services into Cardiff until December 2005. Following their withdrawal, commuters complained about overcrowding on the Pacer and Sprinter DMUs which had replaced them, and one locomotive-hauled train was reinstated as a result, initially with Class 47 haulage. Class 37s were later reintroduced, and continued up until December 2006.

Two of the regular locomotives on these services were specially repainted during 2005; 37411 was repainted in BR green, and 37425 was repainted in BR large logo blue and named 'Pride of the Valleys' (in English on one side of the loco and in Welsh on the other). Both have since been withdrawn from service, and EWS-liveried 37410 was used for the last couple of months of Class 37 operation on the Rhymney service.

When EWS and DRS reduced their Class 37 fleets, several locomotives were bought by spot-hire companies. These are described below.

Harry Needle Railway Company owns several class 37s. Four, understood to be 37/0 locomotives 37010, 37100, 37170 and 37178, are currently destined for sale to Network Rail to be used with 37255 from Fragonset Merlin Rail on the Network Rail Cambrian Coast ERTMS signalling system installation project from 2007 onwards.

In 2003, Fragonset Railways purchased a single withdrawn locomotive, no. 37255, from EWS. This locomotive was subsequently loaned to the Great Central Railway and has been restored to working order. Should the need arise, it could be registered for mainline use. This locomotive has been mooted to be one that is to be sold to Network Rail, one of 5 to be used on the Cambrian Coast ERTMS signalling fitting from 2007 onwards.

Riviera Trains own a single locomotive, no. 37383, which is currently stored unserviceable.

The West Coast Railway Company (WCRC) purchased four locomotives from Ian Riley Engineering in 2004. The two operational locomotives (nos. 37197 and 37261) were used on charter trains, or as standby locomotives for "The Jacobite" steam-hauled excursion services from Fort William to Mallaig during 2005. These two, along with non-operational 37423, have since been sold to DRS. The fourth (no. 37235) was for spares.

Class 37 locomotives have proved to be very popular, with many examples saved for preservation on heritage railways or by enthusiast groups. Notable examples saved include the first-built locomotive, no. D6700, prototype Mirlees-engined no. 37901, and both Ruston-engined prototypes nos. 37905 and 37906.

As of January 2005, the main operator of Class 37 locomotives was Direct Rail Services. EWS retain a large fleet of fifty-plus locomotives in reserve, which can be reactivated at short notice.