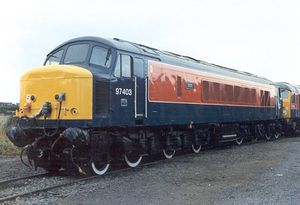 The British Rail Class 46 is a class of diesel locomotive. They were originally built from 1962 and numbered D138-D193. With the arrival of TOPS they were renumbered to Class 46. 56 locomotives were built, all of them were withdrawn by 1984.

On 17 July 1984, 46009 was deliberately crashed into a nuclear waste flask at about 90mph (145 km/h) on the Old Dalby test track. The test, organised by the CEGB, demonstrated to the public that there would be no leak of radioactive material in the event of a rail accident involving a train carrying a nuclear waste flask. 46009 was later scrapped at V Berry Old Dalby in July 1984.

A Class 46 Diesel was featured in The Railway Series books by Rev. W. Awdry (the original 'Thomas the Tank Engine' stories). D199 later given the nickname Spamcan by his driver, only appears in book No.23 Enterprising Engines.