The British Rail Class 04 0-6-0 diesel-mechanical shunting locomotive class, built between 1952 and 1962 and were the basis for the later Class 03 built in the British Railways workshops. The Class 04 locomotives were supplied by the Drewry Car Co., who at the time (and for most of its existence) had no manufacturing capability. Drewry sub-contracted the construction work to two builders both of whom built other locomotives under the same arrangement. Early locomotives were built by the Vulcan Foundry while later examples were built by Robert Stephenson & Hawthorne. 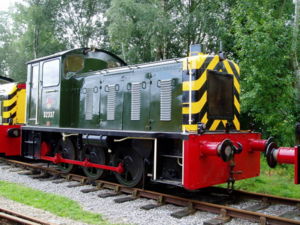 A clear line of development can be seen in the Class 04s from the 0-4-0DM locomotives built by Andrew Barclay and Drewry/Vulcan Foundry in the early 1940s. The design continued to develop during the construction period, but this was generally confined to the size of the cab windows and the diameter of the wheels. Similar locomotives had been built before the first Class 04, and others were built for industrial use.

Mechanically, they were identical to the Class 03, with the same 24 litre Gardner engine, 5-speed epicyclic gearbox and the same overall layout. They had a straight bonnet (US: hood) from the front to the rear-mounted cab, unlike the 03's that bulged higher towards the rear (over the larger fuel tank), and the cab's rounded roof met the sides at an angle instead of with a curve as in the 03's, with a lip all the way round. The internal cab layout was almost symmetrical to allow the driver to work from either side as required.

The class were distributed throughout the British Railways system, but the significant decline in the traffic for which they were designed, resulted in a large surplus of shunting engines on the network. With this reduction in the need for shunters, it was decided to standardise on the Class 03 as a light diesel-mechanical shunter and the Class 08 and 09 as larger, diesel-electric shunters.

The Class 04s were withdrawn from service earlier than the Class 03, being taken out of service between 1968-1971, with only a few ever receiving blue livery. A large number were sold to private industry, allowing many examples to be later bought for preservation.

The first four of these locomotives were fitted with side skirting and cowcatchers for use on the Wisbech and Upwell Tramway (British law requires locomotives running on unfenced street trackage to be so protected for the protection of pedestrians).

These 'Tramway' Class 04 locomotives were the basis for the character "Mavis" in The Railway Series books written by the Rev. W. Awdry, and the subsequent Thomas the Tank Engine and Friends TV Series.

The engine is a Gardner 8-cyl, 4 stroke 8L3 developing 204 hp at 1200 rpm, connected to a Wilson-Drewry CA5 R7, 5-speed epicyclic with RF11 spiral bevel reverse and final drive unit mounted on a jackshaft. The drive to the wheels was by coupling rods from the jackshaft.