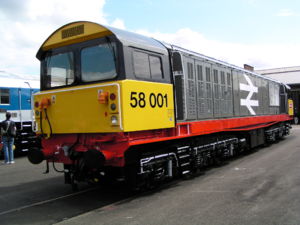 58001, on display at Doncaster Works open day on 27th July 2003. This locomotive was repainted into its original Red-stripe Railfreight livery for the event.

The British Rail Class 58 is a class of Co-Co diesel locomotive designed for heavy freight. Introduced in 1982, they followed American practice of modularisation. From new they were painted in grey Railfreight Sector livery, instead of BR blue. EWS withdrew them in the early 2000s, though some have been hired abroad and gone to the Netherlands, Spain, and France.

In the late 1970s, British Rail was keen to develop a new, low-cost, easily maintainable freight locomotive that would handle the predicted rail freight growth during the 1980s as well as having the potential as an export design. Once a design for the new Class 58s had been approved by the British Rail Board, the contract to build the locomotives was awarded to British Rail Engineering Limited (BREL) in Doncaster where work started on a major multi-million pound upgrade of ‘E2’ shop where the locomotives would be manufactured.

The first locomotive, 58001, was handed over to British Rail at Doncaster Works on the 9th of December 1982 and delivery of the remainder of the locomotives swiftly followed. 58050 was temporarily fitted with a SEPEX wheelslip control system, but this was deemed a failure and removed before the locomotive entered traffic with BR in 1987. After delivery of the locomotive, the expected orders for export designs never came and so the jigs at Doncaster were dismantled and 58050 became not only the last Class 58 to be built, but the last diesel locomotive to be built at ‘The Plant’.

Since they were introduced in the early 1980s, the 58s have gone about their duties quite happily. Mainly concerned with the Midlands MGR coal traffic, they would be just as at home working other services – Freightliners, Speedlinks, steel, automotive traffic, enterprise and even the occasional passenger rail tour services!

During the late 1990s, it was almost certain that the entire Class 58 fleet would see in the next millennium as working locomotives. Quoted as “EWS’ most reliable and consistent Type 5s”, it came as a shock to many when in 1999 it was announced a large number of Class 58s were going to be placed into long term store: 58017 was the first to be stored, quickly followed by 58022.

Since then, the remainder of the Class 58s were stored at various points around the country. This was not really helped with the introduction of 250 Class 66s. The last few Class 58 locomotives were simply switched off in September 2001 after working the last charter train, the “Bone Idol” from King’s Cross to Skegness and return.

In 2000, it was announced by EWS that five Class 58s were going to be sent to the Netherlands on hire to Dutch container train operator ACTS. Since then, some members of the Class 58s fleet have also been sent to Spain (on hire to Spanish infrastructure operator GIF) and more recently, a large number of Class 58s (alongside Class 56s) will operate in France for Fertis, TSO and Seco. With the lack of orders for export designs of the locomotives at their construction stage, it now seems ironic that these locomotives have been sent abroad to work.

Since 1983, Hornby_Railways have sold an 00 Gauge Model of a Class 58. This is expected to be superseded by a newly announced model by Danish manufacturer Heljan , due for release in 2007.