The names are class names, not the names of specific locomotives. 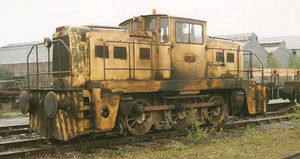 Typical Janus locomotive at a Steelworks

The Janus locomotive was of 0-6-0 wheel arrangement, diesel-electric, weighed 48 tons and had a maximum speed of 23 mph. The two Rolls Royce 2xC6SFL diesel engines gave a total of 400 hp. The locomotive demonstrated on British Railways was second of this type built (works number 2595/56), both the first two locomotives being demonstrated to potential customers before going to the Appleby-Frodingham Steelworks in Scunthorpe. It is thought to have been in use there until being scrapped 1982.

Eventually just short of 100 Janus locomotives were built (one even being built for operation in India), some of which are still in industrial use in 2005.

The name Janus is from the two-faced god Janus: the locomotive was symmetrical with two 'faces'. The similarity in power and speed would indicate that this type of locomotive could have been use in a similar role to the British Rail Class 08 shunter. In recent years Class 08 shunters owned by EWS have replaced Janus locomotives on some industrial railways.

The Taurus locomotive was an 0-8-0, diesel-hydraulic, weighed 56 tons and had a maximum speed of 36 mph. The two Rolls-Royce 2xC8SFL diesel engines gave a total of 600 hp. The transmission of this locomotive worked on a similar principle to that of the Fell diesel tested during the early 1950s. In this case, at low speeds only one engine was used, the second being engaged to increase to allow higher speeds. The maximum speed with one engine was 12 mph while the minimum speed with both engines was 3.5 mph.

It would appear that the name came from Taurus the bull while maintaining the ‘….us’ theme of Yorkshire Engine Co locomotive types (Janus, Olympus, Taurus, Indus).

The Taurus was demonstrated and tested on British Railways during 1961 and 1962. It was a ‘trip’ locomotive intended to carry out shunting work and hauling local (short distance) goods trains. This was the duty for which the British Rail Class 14 locomotives were built in 1963.

Following the trials, the Taurus was returned to the manufacturer's works in Sheffield and was dismantled, leaving only the chassis (which was scrapped in 1965). A second Taurus locomotive was built for use in Spain to a gauge of 1674 mm (5 ft 6 inches). It is possible (but not proven) that all the components from the British Rail demonstrator were transferred onto the wider chassis built for Spain.

A works number is allocated to the chassis/frame, so it is appropriate that the demonstrator no. 2875 has a different works number from the Spanish locomotive no. 2892), even if many parts were reused.

The Spanish Taurus locomotive survives in a railway museum in Madrid. Photographs of it there have been published on the internet [1].

In July 1961 an 0-6-0 diesel-hydraulic locomotive was demonstrated on British Railways. It weighed 40 tons and was powered by a single Rolls Royce C8SFL engine giving 300 hp. The design was similar to a lengthened British Rail Class 02. The locomotive was tested near Derby for four days, and following the demonstration was delivered to Llanwern Steelworks, Newport.