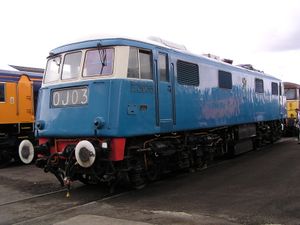 Class 83, no. E3035, on display at Doncaster Works open day on 27th July 2003. This locomotive is preserved by the AC Locomotive Group at Barrow Hill Engine Shed.

Fifteen engines of British Rail Class 83 were built between 1960 and 1962 by English Electric at Vulcan Foundry, as part of British Rail's policy to develop a standard electric locomotive. Five prototype classes (81-85) were built and evaluated, which eventually led to the development of the Class 86 locomotive.

Three of these engines were to have been built as Type B, geared for freight trains, but as it was only two were so built, becoming E3303 and E3304. The third Type B, E3305, was never built as such. Instead it was used as a test bed with silicon rectifiers and transducers, this being the first step towards thyristor control. It became a Type A, geared for passenger trains, and numbered E3100.

Power was provided by overhead catenary energized at 25,000 V AC.

As with the Class 84 the Class 83 suffered with problems due to the mercury-arc rectifiers. After spending several years in storage, 1967 to 1971, they were rebuilt with silicon rectifiers, as was already fitted to E3100.

The decision to reinstate the fifteen engines of Class 83 was the result of the extension of the electrification requiring more electric locomotives. With both Class 83 and Class 84 being returned to traffic only thirty-six Class 87 were required to be built.

Two engines were withdrawn early as a result of accidents. The first was 83003, withdrawn in 1975, which was severely damaged in an accident with a Class 86 at Watford.

The second engine was 83004 which on December 24 1977 was severely damaged in a collision with a Class 47 at Willesden.

In 1983 ten of the remaining thirteen engines were withdrawn, all being sent to the Vic Berry Scrapyard in Leicester.

The last three in service, 83009, 83012, and 83015 were retained for use on empty coaching stock workings from London Euston Station to Willesden.

One locomotive has been preserved by The AC Locomotive Group.