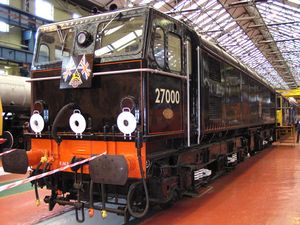 The British Rail Class 77, also known as Class EM2, is a class of 1.5 kV DC electric locomotive. They were built by Metropolitan Vickers in 1953-1955 for use over the Woodhead Line between Manchester and Sheffield.

Seven locomotives of this type were constructed. They represented the first Co-Co type of overhead electric locomotive built for use in the United Kingdom. The design was based on that of the smaller Class EM1, which dated from 1941. Initially, 27 locomotives of this type had been planned, but by the early 1950s, the benefits of using the 25 kV AC system had been demonstrated, which meant that the Woodhead Line would be an isolated electric system. Consequently the order was cut to just seven locomotives.

The locomotives were initially numbered 27000-27006 and were painted in BR black livery. All seven were named after characters from Greek mythology in 1959-1960. They were primarily used for express passenger trains between Manchester Piccadilly and Sheffield Victoria. In 1957, the class was renumbered with the addition of an "E" prefix to the number. In the early 1960s, the class started to receive the standard BR green livery. The class never received the electric blue livery carried by the AC electric locomotives.

The class was withdrawn en-mass in September 1968. They were stored at Bury by BR in the hope of sale to a foreign railway. The passenger service for which the Class 77s were built continued to be operated by Class 76s, but was withdrawn on 5th January 1970. The Woodhead Line was closed in 1981.

In September 1969 the entire class was sold to Dutch Railways, Nederlandse Spoorwegen (NS), where they became NS 1500 Class. They were renumbered in the 1500 series in the order they left their workshops, where they received various modifications, including new headlight clusters. The locomotives also retained their names. One locomotive, no. E27005 Minerva was broken up and used for spares. The remaining six locomotives were employed until final withdrawal in 1986.