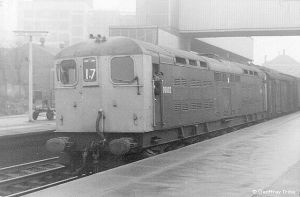 The British Rail Class 70 was a class of three 3rd rail Co-Co electric locomotives. The initial two were built by the Southern Railway to Alfred Raworth's design at Ashford works in 1941 and 1945 and were numbered CC1 and CC2 (CC2 was modified slightly from the original design by C.M.Cock who had succeeded Raworth as Electrical Engineer). Externally, it was clear the cab design owed a lot to Southern experience with the 2HAL multiple unit design. It has even been suggested that (in true Southern tradition) this was because the jigs for the welded cabs already existed and thus made for speedy and cheap construction. At the outbreak of war in 1939, most construction projects were put on hold in favour of the war effort. Construction of CC1 and CC2 was exempted from this because of promised savings in labour and fuel over steam locomotives. Construction was not smooth however and was brought to a halt several times due to shortage of resource.

After nationalisation in 1948, British Railways renumbered them 20001 and 20002 respectively. Also a third member of the class (20003 from new) was built at Brighton. S.B.Warder (later to become Chief Electrical Engineer of The British Transport Commission and architect of the 25KV AC overhead system still in use today) was now SR Electrical Engineer and he modified the design somewhat. Although counted as the same class, 20003 was markedly different externally to its two earlier sisters being 2 inches (5cm) longer with flat 4SUB like cab ends. Again a suspected economy drive and arguably simpler (and therefore cheaper) design than the earlier two. Equipment changes also added 5 tons to the earlier 100 ton design. All three locomotives were equipped with stencil headcodes but as it quickly became apparent that suitable headcodes for freight workings did not exist (nor did the combination of 2 numbers only at that time, provide the scope) they were fitted with steam locomotive style discs (6 for Southern Region) so the standard codes could be displayed. With standardisation came a whole set of new codes with letters as well (still only two characters) and all three locomotives were fitted with roller-blind headcodes and the front ends stripped of their disc codes and greatly cleaned up.

The class soon proved their worth. The six traction motors providing 1470hp allowed them to handle 1000 ton freight and 750 ton passenger trains with ease.

Being much shorter than the predominant multiple units, electric locomotives can suffer from a problem known as "gapping" - becoming marooned between supplies at the natural breaks in the third rail and snatching at the couplings whilst moving as they come on and off the power. The latter places undue stress on couplings and has been known to cause separations of a train. Raworth overcame this by having a motor-generator set with a large flywheel on the shaft between the two (leading to the nickname "boosters"). The traction current, instead of feeding the traction motors directly, powered a large motor which turned a shaft with the flywheel and fed into the generator. The flywheel ensured the generator continued to turn whilst no current was available from the third-rail, thus ensuring a continuous supply to the traction motors (from the generator). Even while stationary, the Class 70 produced a noticeable droning noise due to the motors turning inside the body. Two of these booster sets were fitted in each locomotive - one for each bogie. It was not, however, sufficient to allow the locomotives to work "off the juice" as the load on the generator whilst under power meant it would quickly consume the stored kinetic energy. They needed attentive driving also, to ensure they were not brought to a halt on a gap and the booster set be allowed to run down. It is obvious that there would be losses throughout the system incurred in the conversion of electrical energy to kinetic and back again but Raworth mitigated this in the control mechanism. Instead of having large, heavily built resistances in the power lines for the motors, the 26 taps on the throttle changed resistances in the field coils of the generator. These correspondingly made the construction much lighter and easily maintained. Instead of "burning-up" unrequired power, the throttle simply altered how much power was generated and the traction motors were wired directly to the generator output.

All three were fitted with a tram style pantograph to allow them to work from overhead catenary erected in some yards (notably Hither Green, S.E. London) where it was deemed too dangerous to have third-rail with staff constantly at track level - doubly-so in wartime. This pantograph recessed into a cut-out on the roof when not in use to keep within the loading gauge.

Although only three were built, they formed prototypes for the later Class 71.

All three were withdrawn in the winter of 1968/1969 without receiving their TOPS numbers, although 20001 received BR corporate blue for its final years. None survived to preservation.