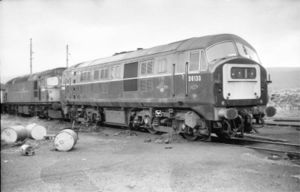 The British Rail Class 29 consisted of 20 diesel locomotives which were rebuilt from the North British Class 21 in 1964-1965 at Polmadie Works with a Paxman Valencia V12 engine (predecessor to the HST 12RP200 'Valenta' engine). Although these offered more power and much improved reliability over the MAN engined Class 21s they were not retained due to their small class size, and the use of a high speed diesel engine. The class were withdrawn at the end of 1971 and no locomotives survive today.