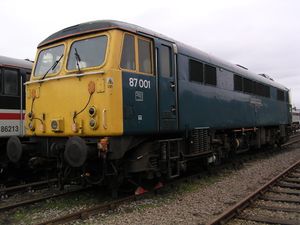 No. 87001 Stephenson at Crewe Works open day on 11th September 2005. This locomotive was repainted into original BR Blue livery for an earlier Crewe open day in 2003. This locomotive has since been preserved at the National Railway Museum. 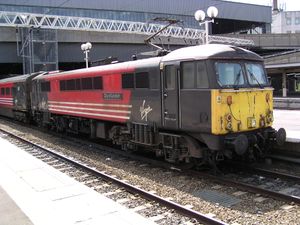 87005 City of London at London Euston on 19th July 2003. This locomotive was operated by Virgin Trains and is painted in their red and black livery. It was the first Virgin locomotive to be withdrawn in September 2003, and was scrapped in October 2005. 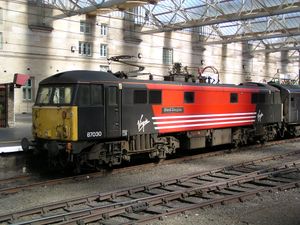 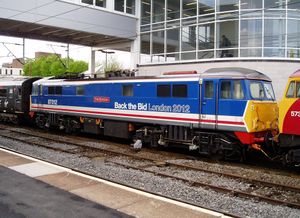 87012 The Olympian in modified Network SouthEast livery to promote the London 2012 Olympics bid on 6 May 2005.

The British Rail Class 87 is a type of electric locomotive built from 1973-75 by BREL. These locomotives were built to work passenger services over the West Coast Main Line after electrification spread north from Crewe to Preston, Carlisle and Glasgow. This allowed the pairs of Class 50 diesel locomotives that previously worked these services to be redeployed.

Design of the Class 87 was clearly derived from that of the previous Class 86; this was deliberate as British Rail at that time had a policy of restricting the variability of the outward appearance of its AC electric locomotive fleet. The only major detail differences were two front cab windows on the 87 instead of the three of the 86; also the lack of headcode boxes, present on the Class 86 but absent on the 87 as visual recognition of train reporting numbers by signallers was by then no longer necessary. In 1977/78, British Rail named its entire Class 87 fleet, many receiving names previously carried by the Class 7P "Britannia" Pacific steam locomotives. The rest were named after towns, cities or counties along the WCML.

In November 2004, GB Railfreight (GBRf) acquired two locomotives, nos. 87013 and 87014, which had recently been retired from passenger service. They are used as standby locomotives, to rescue failed Class 325 units for the new parcels contract recently won by GBRf. In July 2005, the fleet was increased with the addition of nos. 87012 and 87019, both of which had recently been stepped down by Virgin Trains. They replaced nos. 87013 and 87014, which required works attention. The fleet was increased to three in September 2005, with the addition of no. 87002, but this was stored later in the year after developing faults. Two further machines, nos. 87026 and 87028 were leased during December 2005 due to the increase in mail traffic at Christmas. Number 87026 was soon stored after developing transformer problems, to be replaced by nos. 87006 and 87022 - however, 87026 continued to work into February 2006 despite being officially stored.

This was followed by 87012 and 87019 going off-lease at the beginning of July 2006. GBRf has however made some investments in the remaining pair (which regularly work the new special Blue Pullman trains) which 87022 regaining its original name Cock o'the North at the beginning of August, and 87028 regaining it's former Lord President plates shortly after. Currently this pair have a relatively secure future.

At one point, it was thought probable that Cotswold Rail would acquire a fleet of up to ten locomotives. However, number 87026 was transferred to GBRf in December 2005, and in May 2006, all except four locomotives were removed for storage. The fleet then consisted of operational locomotives, nos. 87007 and 87008, both painted in CR silver, and nos. 87003 and 87023 undergoing repairs. 87021, 87025 and 87033 were stored away from the wires in the Ministry of Defence depot at Long Marston.

In November 2004, Direct Rail Services (DRS) acquired four locomotives. Three of these, nos. 87006/022/032 were recently retired by Virgin Trains, whilst the fourth, no. 87028, had been out of traffic for a period, but was still operational. DRS acquired the locomotives to work new freight paths on the WCML.

Three of the locomotives were repainted into DRS blue livery. They were infrequently used on Anglo-Scottish intermodal services, but were never used on a regular basis. In June 2005, after the end of the trials period, the four locomotives were stored. The main reason for their lack of use was the need for a diesel to shunt the train in non-electrified sidings.

Following their withdrawal by DRS 87032 was sent to Springburn depot in Glasgow while 87006/022/028 were moved to Wembley depot in London. Subsequently the Wembley trio returned to service with GBRailfreight while 87032 remained out of use in Glasgow. In September 2006 this locomotive was moved to join the other stored 87s at Long Marston.

EWS inherited a sole locomotive from Railfreight Distribution, the unique Class 87/1, no. 87101. The locomotive was used infrequently on freight and charter trains. However in early 1999 it suffered a major failure, and was subsequently withdrawn due to its non-standard nature. After languishing at Crewe for several years, it was eventually sold to Alstom for spare parts. It was finally scrapped at Barrow Hill by HNRC in 2002.

Virgin Trains inherited all 35 Class 87/0 locomotives, which were operated as part of the West Coast franchise.

The original intended final day of operations was 10 June 2005, when no. 87012 worked a Northampton-Euston service and no. 87019 a Wolverhampton-Euston service. These were followed by the final service from Euston to Manchester, which was double-headed by nos. 87010 and 87002.

In May 2006, numbers 87002, 87006 and 87026 have been released by GBRf for a return to working passenger services, whilst the Class 390 Pendolino electric multiple units are undergoing modifications. In October 2006 87026 was swapped for recently stored and fully operational 87007, owing to deterioration in 87026 which has been stored for a lengthy period before being returned to service and worked hard with little attention, causing increasing mechanical difficulties involving heavy work, particularly with the expensive transformer.

On 22nd December 2006, 87002 worked the 1651 Euston-Birmingham and then the 1900 return to Euston, which again brought the use of class 87 haulage on scheduled passenger services to an end. The loco carried the headplate 'Electric Scot 1973-2006' and the driver wore an authentic 1970's British Rail uniform.

Export for further use

Locomotives 87012 and 87019 were sold to an operator in Bulgaria, with the transfer to take place in early 2007 after Bulgaria's accession to the European Union, in order to minimise customs formalities. It is expected that more units will follow.

Currently, three locomotives have been preserved:

There are also definite plans for at least one more to be saved: