The British Rail Class 10 railway locomotive was a variation on the Class 08 diesel-electric shunter in which the English Electric engine was replaced by a Blackstone engine and traction motors were either GEC or BTH. The locomotives were built at the BR Works in Darlington and Doncaster over the period 1953-62. 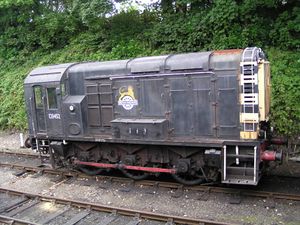 Class 10, no. D3452, at Bodmin on 28 August 2003. This locomotive is preserved on the Bodmin & Wenford Railway.
Retrieved from "https://train.spottingworld.com/wiki/index.php?title=British_Rail_Class_10&oldid=1157"
Categories: