British Rail's Class 01 diesel locomotives were a short wheelbase 0-4-0 Diesel-mechanical design intended for use in area with tight curves and limited clearance. 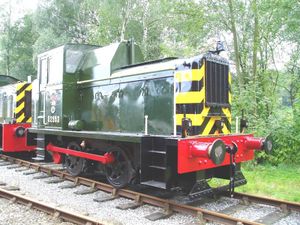 The locomotives were very versatile, despite having only 153 horsepower available, and were small enough to operate on any railway on the BR standard gauge network - except for the small problem that they were limited to 14.25 mph (22.8 km/h). For a fleet of just five locomotives, they were also very reliable, although Stratford Docks, where they originally worked, is not noted for creating very hard labour.

01 001 and 01 002 survived in BR service because they were required to service the Holyhead breakwater, being the only locomotives light enough for that track. 01 001 was not used after 1973 and was withdrawn in 1979, and 01 002 followed in 1981. Both locomotives were cut up on site still carrying their original livery of British Railways black with black-and-yellow "zebra stripe" warning ends and the original British Railways "unicycling lion" emblem. They were the last locomotives in BR service to do so; fittingly, because Class 01 were also the first to carry that emblem. They had lasted 26 years, meaning that they were operating for longer than all other shunting fleets except for classes 03, 08 and 09.

Class 01 locomotives had a Gardner 6 cylinder in-line, 4 stroke 6L3 engine of 153 hp (114 kW) at 1,200 rpm connected to a Wilson SE4, 4-speed epicyclic gear box with a Vulcan-Sinclair type 23 rigid hydraulic coupling, and a Wiseman 15LGB reverse and final drive unit. The wheels were connected by coupling rods and driven by a jackshaft.

Two survive in preservation; D2953 (at Peak Rail) and the first D2956 (on the East Lancashire Railway).

Re-use of the TOPS code

More recently, the subclassification 01/5 has come into use to refer to small privately owned shunters certified to run on Railtrack metals. As such, 01/5 is a collective grouping of a bunch of very different locomotives, having in common only that they're small, hitherto unclassified shunters of designs never given a BR classification.