The British Rail Class 57 diesel locomotives were rebuilt by Brush Traction between 1997-2004, as rebuilds with new engines of Class 47 locomotives. They are known as "bodysnatchers", "Snatchers" or "Zombies" to enthusiasts, by virtue of the fact that the shell (body) of the class 47 has been stripped and rewired and engined.

The Class 57 is a re-engineered locomotive, rebuilt by Brush Traction at Loughborough from redundant Class 47 locomotives. The locomotives are fitted with a refurbished General Motors engine, and a reconditioned alternator, vastly improving reliability and performance. Two variants exist, for freight and passenger operations.

The class has its origins in 1997, when Freightliner ordered an initial six locomotives. In 2000, a prototype locomotive, number 57601, was converted with electric train heating capacities, with a view of obtaining orders from passenger companies. 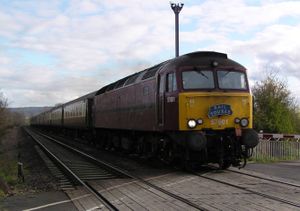 Class 57/6, no. 57601 passing Brockhampton, north of Cheltenham, on 16 April 2005, whilst working a Bath-Skegness charter train. This locomotive was the prototype passenger Class 57, and is now operated by the West Coast Railway Company.

In 1997, Freightliner placed an order for an initial six Class 57/0 locomotives. The first of these was released in 1998, and coincided with the unveiling of the new British Racing Green Freightliner livery. After an evaluation period, Freightliner was sufficiently impressed to order a further six locomotives, with plans for an eventual fleet of 25 locomotives. However, in the event, only twelve locomotives were rebuilt, due to the purchase of completely new Class 66 locomotives from General Motors.

The Freightliner fleet sees use over a wide area, serving locations such as Ipswich, Southampton, Birmingham, Cardiff and Leeds. The introduction of the class resulted in the replacement of the Class 47 locomotives on most long-distance intermodal trains.

In 2000, Porterbrook Leasing placed an order for a prototype passenger locomotive fitted with electric train heating. This locomotive, no. 57601, was leased to First Great Western (FGW), who were looking for a replacement for their elderly Class 47 locomotives, which were employed on the "Night Riviera" overnight sleeper and Motorail services from London Paddington to Penzance. After an evaluation period of three years, FGW ordered four production Class 57/6 locomotives from Brush, which were delivered in 2004. These new locomotives displaced the Class 47 locomotives, which were transferred to other operators. As the prototype locomotive was non-standard, it was returned to Porterbrook Leasing, who then sold it to the West Coast Railway Company. The First Great Western (FGW) locomotives have been having reliabilty issues lately, resulting in hiring locomotives from Cotswold Rail.

The FGW fleet is painted in a green livery with a gold bodyside band, with cast name and numberplates. All four locomotives have been named after local castles in Devon and Cornwall, and operate solely on the Night Riviera sleeper service and standby and rescue duties, the Motorail service having been abandoned in 2005.

Under their franchise agreement, Virgin Trains was required to purchase new locomotives to replace its elderly Class 47 locomotives. As a result, an order for sixteen Class 57/3 locomotives was placed with Brush Traction. They are employed as rescue locomotives (so called "Thunderbird" duties), and are used to drag Virgin Train's electric train when engineering works force services to be diverted. They are also used to haul Crewe to Holyhead passenger trains.

The Virgin fleet is painted in their red and silver livery, and locomotives are named after characters from the TV series Thunderbirds.

The West Coast Railway Company (WCRC) owns a single Class 57/6; the prototype passenger locomotive 57601. This is employed on WCRC charter trains, and is painted in the company's maroon livery, to match the coaching stock.