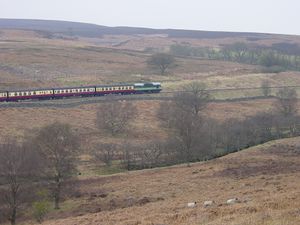 The British Rail Class 25 diesel locomotives were also known as Sulzer Type 2 and nicknamed Rats. In all 327 locomotives of this type were built between 1961 and 1967. These locos were primarily designed for freight work, but a significant number were fitted with boilers for heating passenger trains. Throughout the 1970s they could be found at work across the whole of the British Rail network although the Eastern and Southern Regions never had an allocation. Though regular performers into the early 1980s on Crewe–Cardiff passenger trains, they are best known in that respect for their use on the summer Saturday trains to Aberystwyth, a task they relinquished in 1984. The final class 25 locomotive was withdrawn from service in March 1987. A number of class 25 locomotives have been preserved[1].

The Class 24 locomotives were the precursor of the class 25 design but after the delivery of their first few units it became apparent that the speed ceiling of 75 mph was unduly restrictive and the provision of a bit more power would be advantageous. In the course of normal development the power output of the Sulzer six-cylinder engine had been increased to give a continuous traction output of 1,250 bhp at 750 rpm by the introduction of charge air cooling and the first locomotives to use this became known as Class 25 locomotives.

The first 25 locos became known as Class 25/0 and were built at the BR Darlington works using the newer 1,250 hp "B" engine, modified generator assembly and traction motors. This increase in power was obtained from an air/water free flow intercooler fitted between a higher capacity pressure charger and inlet manifold, included within the normal cooling circuit to maintain simplicity. The cylinder head was also modified and strengthened.

The Class 25/1 locomotives were built at BR Darlington and Derby locomotive works. They featured the new AEI 253AY traction motor, a result of the collaboration between BTH, MV and American builder Alco. This smaller, lighter motor was an attempt to market a traction motor to a worldwide audience, especially to the metre gauge lines. For Class 25 locomotives these lighter motors meant the discontinuance of other weight saving measures being built into the design. They were highly rated in an attempt to overcome the loss of tractive effort normally found on starting. The field divert system was also modified to allow increased capability throughout all the speed ranges.

The main generator was a 12-pole machine with the rating changed to 819kW, 780/545V, 1050/1500A at 750 rpm. (The continuous rating has also been quoted as 819kW, 630V, 1300A). The four traction motors were now connected as series parallel pairs being rated at 234 hp, 315V, 650A at 460 rpm, with a gear ratio 18:67. Pairs of motors connected in series provided a higher maximum tractive effort (usually quoted as 45,000 lbf although 47,000 lbf could be achieved) but the downside being that a series pair connected machine was more prone to slipping that one with an all parallel grouping. Full power was available between 7 and 77.5 mph, an improvement over Class 25/0 locomotives with all other ratings unchanged from the earlier series. The traction motor’s continuous rating of 650 amps was not far removed from its one hour short term or 'emergency' rating of 680 amps, and this could only be monitored manually. On heavy trains close monitoring of the ammeters was necessary to avoid motor damage. Though the body shell remained similar to D5151 there were a number of refinements. The air horns were relocated to either side of the headcode panel. The cab skirt and body fairing were discontinued, though the support lugs remained. A new driving control panel was fitted. The fuel & water tanks were also redesigned with a fuel capacity of 510 gallons (also quoted in sources as being 500 or 560 gallons).

There were initially two variants of this sub-class. The vast majority were boilered and designated 251 AV. The four without train heating were designated 251 BV. In due course, when it was decided to fit dual braking to a number of locomotives, those previously 251 AV became 251 CX and one of the 251 BV (25032) became 251 DX.

The Class 25/2 locomotives featured restyled bodywork and two-tone green livery similar to that carried by the Brush Type 4 (Class 47). The majority were built at BR Derby although some came out of the Darlington works. The redesign principally affected two areas, the cab and the location of the air intakes. The gangway doors fitted to the earlier examples were rarely used, their presence adding to the complaints of noise and draughts in the cabs. The removal of the air filters from the side air louvers to the cantrail was the result of a comparison carried out at Inverness between a batch of Derby built Type 2's and a batch of BRCW Type 2's (class 26/27), the tests targeting the air quality within the engine room. These tests revealed the location of the grilles on the Derby build allowed for much more debris to reach the filters (especially the lower ones), clogging them quicker, leading to poorer air quality within the engine compartment, and so potentially affecting performance and engine wear. With such a large order to be completed it was felt that a redesign of these areas would have a cost savings in the long run, in addition to a better working environment within the cabs, and with a general less cluttered look about the locomotive's exterior.

In 1962 Sulzer designed and began development of a prototype engine for higher outputs based on the LDA range. Rated initially at 1,700 hp at 850 rpm (with a development potential to 2,000 bhp at 850 rpm) it was approximately the same overall size as the 6LDA28 and designated LDA28-R. BR was approached with the idea that one of the Derby Type 2s should be fitted with this engine and development work proceeded slowly until problems with the 12LDA28-C (used on the class 47 locomotive) diverted resources. In the end development was terminated and the locomotive set aside for its use, D5299, was completed as a standard class 25/2.

There were six variants of this sub-class, reflecting that locos were boilered and/or vacuum braked and/or dual braked. Boiler fitted locomotives included the first five (252 AV) and final thirty class 25/2 (252 DV). Only members of the latter batch were modified for dual brake operation becoming 252 CX with the exception of 25242 that had had its boiler removed and was designated 252 FX. The non-boilered vacuum braked locos were 252 BV and when dual braked became 252 EX.

The final batch of locomotives were designated Class 25/3 and was to be built by BR Derby and Beyer Peacock of Manchester. However, because of financial problems Beyer Peacock was unable to complete the final 18 locomotives and these were transferred to BR Derby for construction.

Though these locomotives still carried a RTB 15656 generator, this variant was a ten pole machine with a modified assembly incompatible with earlier equipment. The regulated (full hp) part of its characteristic was substantially the same as before but the unloading point, that is the point at which full power could no longer be utilised, was altered to 900 A, 910 V (819 kW) from 1,050 A, 780 V (819 kW). Only two stages of field weakening were employed, previous machines had six, and this provided ‘full power’ at speeds between 7 and 80 mph, and maximum tractive effort was reduced to 41,500 lbf.

The latter half of the 1960s had seen the widespread introduction of solid state electronics and these locomotives incorporated a control system where speed was detected electronically rather than mechanically. A signal from a tachogenerator was used to close contactors in sequence at given speeds to activate the motor's field weakening process, rather than through contacts and relays as in earlier types. The control system ensured the traction motors and main generator were all operated within the continuous rating of the machines except in full field conditions when the driver was able to judge how long to remain in the short-term rating condition. There were two variants of the Class 25/3 sub-class. Early 25/3 AV locomotives were fitted with vacuum brakes and in due course many of these were dual braked and redesignated 253 BX. By the time the last few locomotives were under construction dual braking had become the norm and ten of the last batch from Derby were built new as 25/3 BX locomotives for work out of Willesden on the recently upgraded West Coast Main Line.

At the end of 1985 twelve of the remaining class 25/3 locomotives were designated as 25/9, the intention being that they would operate on traffic won for the Industrial Minerals Division of Railfreight that included salt for road gritting from the ICI mine at Winsford. The locos were selected from the available pool of Class 25 locomotives in March 1985 with the expectation of three more years of service before 10,000 running hours since last Works attention would be reached and their maintenance being concentrated on Carlisle Kingmoor depot. At that point the expected cascade of motive power on BR as a whole would see them replaced by Class 31 locomotives. However, the traffic they were designated for was not captured and in due course the sub-class were withdrawn along with the other members.