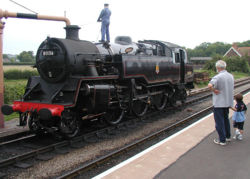 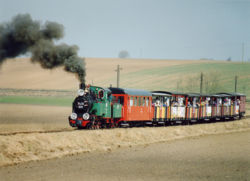 Heritage railways are usually railway lines which were once run as commercial railways, but were later no longer needed or were closed down, and were taken over or re-opened by volunteers or for-profit organizations. Many run on partial routes unconnected to the commercial railway network, run only seasonally, and charge high "entertainment" fares. As a result they are primarily focused on serving the tourist and leisure markets, not local transportation needs. However in the 1990s and 2000s some heritage railways have begun to provide local transportation and to extend their running seasons to cater for commercial passenger traffic. A good example is the Welsh Highland Railway which provides year-round services and diesel-hauled trains timed to serve local communities as well as tourists.

Typically a heritage railway will use steam locomotives and old-fashioned rolling stock to create a "period atmosphere", although some are now concentrating on more recent "modern image" diesel and electric traction to re-create the post-steam railway era.

The first heritage railway to be rescued and run entirely by volunteers was the Talyllyn Railway in Wales. This narrow gauge line, taken over by a group of enthusiasts in 1950, is recognized as the start of the preservation movement. There are now several hundred heritage railways in the United Kingdom. This large number is due in part to the closure of many minor lines in the 1960s under the Beeching Axe. These were relatively easy to revive. The first such standard gauge line to be preserved was the Bluebell Railway. The worlds second preserved railway, and the first outside the United Kingdom, was the Puffing Billy railway in Australia. This railway operates 24 km of track with much of the original 1898 rolling stock.

Heritage railways differ in the intensity of the service that can be offered. Some of the more successful British heritage railways, such as the Severn Valley Railway and the North Yorkshire Moors Railway, may have up to five or six steam engines working, operating a four-train service daily. Other smaller railways may run for seven-days-a-week throughout the summer with only one steam engine. However, following the privatisation of Britain's main-line railways, the lines between not-for-profit heritage railways and for-profit branch lines has blurred. The Wensleydale Railway is an example of a commercial line run partly as a heritage operation and partly to provide local transportation. The Weardale Railway is a similar attempt to provide a commercial heritage line, so far with mixed success. 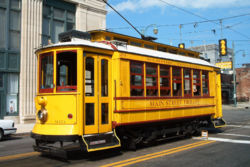 A related development that is becoming popular in the United States is the heritage streetcar. In many cities, historic streetcar (also termed tramcar, trolley or trams) lines are being put in place alongside modern light rail systems. Proponents claim that using a simple, reliable form of transit from 50 or 100 years ago can bring history to life for 21st century Americans. Additionally, many heritage streetcar lines turn out to be much more economical than their modern counterparts, often with installations that go in at a fraction of the cost of newer lines. However, there are trade-offs: such systems often lack handicapped access (required in the U.S. under the Americans with Disabilities Act of 1990), for example. Most are modified to comply with the law.

Systems are operating successfully in over 20 U.S. cities, and are in planning or construction stages in 40 more. Heritage streetcar systems operating in Little Rock, Arkansas, Memphis, Tennessee, Dallas, Texas, New Orleans, Louisiana, Philadelphia, PA and Tampa, Florida are among the larger; a heritage line operates in Charlotte, North Carolina and will become a part of the city's new transit system. The San Francisco Municipal Railway, or Muni, also runs historic trolleys on their F-Market line along the tourist areas along the Embarcadero, including Fisherman's Wharf. Boston's Massachusetts Bay Transportation Authority runs exclusively PCC streetcars on its Ashmont-Mattapan High Speed Line. Dallas has the MATA, Denver has the Platte Valley Trolley, a heritage line recalling the open-car streetcars of the early twentieth-century. The VTA in nearby San Jose, California also maintains a heritage trolley fleet. Two others include Fort Collins, Colorado and Kenosha, Wisconsin

Over 50 years later, the revival of streetcar operations in New Orleans is credited by many to the worldwide fame gained by its streetcars made by the Perley A. Thomas Car Works. These cars were operating on the system's Desire route in the 1947 play and later movie of the same name. Some Perley Thomas cars were maintained in continuous service on the St. Charles Avenue Streetcar line until Hurricane Katrina caused major damage to the right-of-way in 2005. Fortunately, the historic streetcars suffered only minor damage and a few have been transferred to serve on the recently-rebuilt Canal Street line while the St. Charles line is being repaired. New Orleans' St. Charles streetcar line is a National Historic Landmark. Pre-Katrina, New Orleans had plans to reconstruct the Desire line along its original route down St. Claude Avenue.

In San Francisco, parts of the cable car and MUNI streetcar system are heritage lines, although they are also functioning parts of the city's transit system. The cable cars are a National Historic Landmark - with the New Orleans streetcars, the only such landmarks that move.

The Hong Kong Tramways in Hong Kong are considered part of the heritage of Hong Kong.

In the United Kingdom the vast majority of tram lines were lifted before the heritage movement began to flourish. The tracks and trams were scrapped: although trams are returning to British cities, they are modern transportation systems, not heritage operations. There are, however, three notable heritage tram operations in the UK. The National Tramway Museum at Crich, is located in an old limestone quarry and has an extensive collection of preserved trams. By contrast the Blackpool tramway is the only surviving first-generation tram system in the UK and provides a service running along the Blackpool Pleasure Beach using historic and modern trams. There is also a modern "heritage" tramway in Birkenhead, Merseyside.