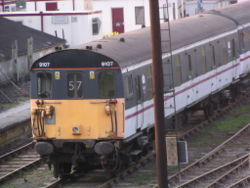 Class 489 no. 489107 at Wirksworth on 17th April 2003. This unit was previously used by Gatwick Express until retirement from service in 2002. It was donated to the railway by Porterbrook Leasing. 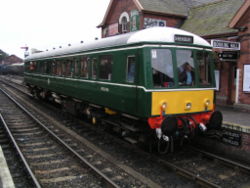 Class 122, no. 55006, operating away from home, at Bewdley on the Severn Valley Railway on 15th October 2004, whilst taking part in the Railcar 50 event. This unit is painted in original BR Green livery, and is usually based at Wirksworth.

The Ecclesbourne Valley Railway is a heritage railway in Derbyshire, with operations based at Wirksworth station. It is currently planned to extend the railway along the former Midland Railway branch line to join the main-line at Duffield.

The "Wirksworth Branch" was the product of early nineteenth century railway rivalry. Since 1835 its citizens had been promoting the idea, among others, for a branch line from the North Midland Railway, later the Midland Railway, at Duffield. The Midland was initially unenthusiastic, but then realised that the branch could be extended to Rowsley, albeit with difficulty, avoiding the section from Ambergate, on its Manchester, Buxton, Matlock and Midlands Junction Railway, which was shared with its rival the London and North Western Railway.

The line was surveyed in 1862 and received Parliamentary assent the following year. It would follow the valley of the River Ecclesbourne with no major obstacles apart from the final climb into Wirksworth. A cutting was required, and some buildings were demolished, while there was considerable upheaval in Duffield. It opened as far as Wirksworth in 1867.

From Wirksworth it would descend to Cromford using a 1503 yard tunnel and a 280 yard long viaduct, and proceed parallel to the existing line, but on the west side of the river through Matlock to Rowsley. However when the lease expired on the original line, the LNWR withdrew, and the Midland acquired complete control. Thus the section beyond Wirksworth was never built. The Midland was left with one of its few branch lines, and one which, it felt, was of questionable viability.

However, it allowed Wirksworth's limestone business to develop, the carriage of which was its mainstay until the middle of the twentieth century. There was also farm produce, particularly milk, some 800,000 gallons daily, and a number of textile mills (Wirksworth had the dubious distinction of being the main supplier of red tape for the London Government Departments). It saw a regular passenger service, with stations at Hazlewood (about half a mile away down a steep hill and originally called Windley), Shottle (originally Cowers Lane) and Idridgehay.

There were three, rising to six, passenger trains from Derby each way, with one on Sunday, and two goods trains. By 1939, however milk was carried instead by road, and during World War II passenger travel was severely curtailed. There was also the hourly "number 37" bus, and passenger trains ceased in 1949. In the latter part of the twentieth century, people increasingly travelled by car and even the bus service has disappeared.

In the early 1950s people near the line were treated to the eerie sight of a railway carriage ghosting along, apparently by itself. It must be said that there would be some who remembered the use of steam motor carriages from the Morecambe and Heysham Railway at the beginning of the century, and steam railmotors from the Yarmouth and North Norfolk Railway. However this was the test vehicle for the new diesel railcars being designed in Derby - nothing more than a standard coach with the mechanism fitted and a windscreen cut in each end for the driver - that presaged a major change in British rail travel. When the so-called Derby Lightweights were produced they were each tested on the line after leaving the workshop.

Although most of the goods had transferred to the roads, limestone traffic continued, including that formerly hauled by the Cromford and High Peak Railway, when it closed in 1967. Though the amount of traffic justified the installation of continuous welded rail in the eighties, production was increasingly of aggregate carried by road. In 1991 the quarries passed to Croxton and Garry Ltd (which later became Omya UK Ltd) which no longer needed a rail link. Although its sidings, and the station goods yard, at Wirksworth are still listed by Network Rail, the connection to the main line at Duffield has been severed and fenced off.

In 1996 WyvernRail plc obtained a Light Railway Order, enabling them to lease the line from Network Rail and operate trains upon it as the Ecclesbourne Valley Railway.