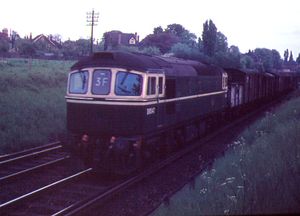 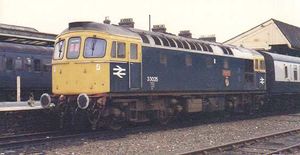 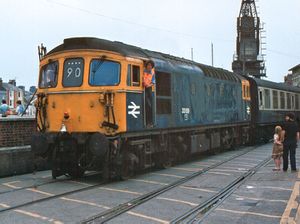 33/1 33 119 negotiates the backstreets of Weymouth on its way to the quay during August 1981. Note the push-pull cables on the cab front. 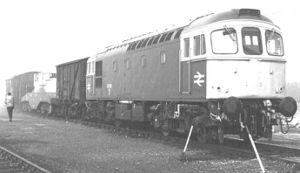 Class 33/2 No. 33 208, one of those built with narrower bodies at Dorchester with a nuclear flask train. 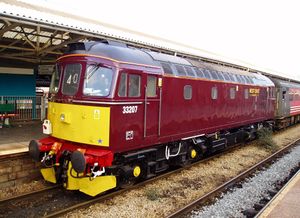 The British Rail Class 33 also known as the BRCW Type 3 or Crompton is a class of Bo-Bo diesel locomotives built for the Southern Region between 1960 and 1962. A total of 98 was built by BRCW, and they were called "Cromptons" after the Crompton-Parkinson electrical equipment installed in them. They began service on the South-Eastern Division of the Southern Region but rapidly spread across the whole Region, and many were used much further afield. They were built with the ability only to supply the new type of electrical train heating, not the more traditional steam heating which most passenger carriages then used, so in the early years their use as winter-time passenger locomotives was restricted to the more modern passenger carriages.

There were three different types:

Most of these locomotives have now been withdrawn from active duty, though some are still in service with West Coast Railway Company and Cotswold Rail, and others remain operational on preserved railways.