The Channel Tunnel Rail Link (CTRL) is a project to construct a 108 km (67 mile) high-speed railway line from London through Kent to the British end of the Channel Tunnel. The second section of the CTRL, travelling across the River Thames and into London St. Pancras is scheduled to open on the 14th November 2007,[1]. Once open, it will be possible to travel from London St Pancras to Paris Gare du Nord in 2 hours 15 minutes and to Brussels in 1 hour 51 minutes.[2] From 14 November 2006, London and Continental Railways adopted the branding High Speed 1 (HS1) for the completed Channel Tunnel Rail Link. 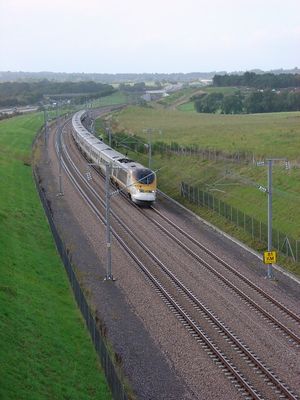 A Eurostar train on the CTRL, near Ashford 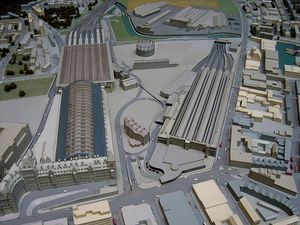 Model showing the current redevelopment of the King's Cross area with the new extension to the barrel-vaulted St Pancras Station on the left.

A high-speed rail line has been in operation on the French section of the Eurostar rail link since the Channel Tunnel's opening in 1994, carrying trains at 300 km/h (186 mph). A similar high-speed line from the French border to Brussels opened in 1997. In Britain, long-distance trains have had to share track with local traffic, limiting average speeds and limiting the number of services that can be run. In addition, the general state of Britain's rail infrastructure has caused frequent and unpredictable delays, reducing the appeal of the Eurostar service.

London and Continental Railways (LCR) was selected by the UK government in 1996 to undertake construction of the line as well as to take over the British share of the Eurostar operation, Eurostar (UK). The original LCR consortium members were National Express Group, Virgin Group, SBC Warburg, Bechtel and London Electric. Whilst the project was under development by British Rail it was managed by ‘‘Union Railways’’, which became a wholly owned subsidiary of LCR.

Originally, the whole route was to be constructed as a single project. However, in 1998 it ran into serious financial difficulties and with its future looking uncertain the project was split into two separate phases, to be managed by Union Railways (South) and Union Railways (North). A recovery programme was agreed whereby LCR sold government-backed bonds worth £1.6bn to pay for the construction of section 1, with the future of section 2 still looking in doubt. The original intention had been for the new railway, once completed, to be run by Union Railways as a separate line to the rest of the British railway network. However as part of the 1998 rescue plan it was agreed that following completion section 1 would be purchased by Railtrack, along with an option to purchase section 2. In return, Railtrack was committed to operate the whole route as well as St Pancras railway station that, unlike all other former British Rail stations, was transferred to LCR/Union Railways in 1996.

In 2001, Railtrack announced that due to its own financial problems it would not undertake to purchase section 2 once it was completed. This triggered a second restructuring. The 2002 plan agreed that the two sections would have different infrastructure owners (Railtrack for section 1, LCR for section 2) but with common management by Railtrack. Following yet further financial problems at Railtrack its interest in the CTRL was sold back to LCR who then sold the operating rights for the completed line to Network Rail, Railtrack's successor. Under this arrangement LCR will become the sole owner of both sections of the CTRL and the St Pancras property, as per the original 1996 plan.

As a consequence of the project's restructuring the LCR consortium is, as of 2006, construction firms Arup, Bechtel, Halcrow and Systra (who form Rail Link Engineering (RLE)), transport operators National Express Group and SNCF (who operate the Eurostar (UK) share of the Eurostar service with SNCB and British Airways), electricity company EDF and the UBS Investment Bank. Once sections 1 and 2 of the line have been completed by RLE they were/will be handed over to Union Railways (South) & Union Railways (North) respectively, who then hand them over to London & Continental Stations and Property (LCSP) who will be the long-term owners of the line with management, operation and maintenance undertaken by Network Rail.

In February 2006 there were strong rumours that a 'third party' (believed to be a consortium headed by banker Sir Adrian Montague) had expressed an interest in buying out the present partners in the project.[3] LCR shareholders subsequently rejected the proposal,[4] and the Government, who effectively could overule shareholders' decisions as a result of LCR's reclassification as a state-owned body,[5] decided that discussions with shareholders would not take place imminently, effectively backing shareholders' views on the proposed takeover.[4]

Some of the men and women who contributed to the successful design and subsequent completion of this mega-project are found in this Arup link.

Section 1 of the Channel Tunnel Rail Link is a 74 km (46 mile) section of high-speed track from the Channel Tunnel to Fawkham Junction in north Kent, opened in September 2003. Opening of section 1 cut the London–Paris journey time by around 21 minutes, to 2 h 35 min. The first section includes the Medway Viaduct, a 1.2 km (¾ mile) bridge over the River Medway and the North Downs Tunnel, a 3.2 km (2 mile) long, 12 m (40 ft) diameter tunnel. In safety testing on the section prior to opening, a new UK rail speed record of 334.7 km/h (208.0 mph) was set [6]. Eurostar trains continue to use suburban lines to enter London, with the existing Waterloo International Terminal. Much of the new high-speed line runs alongside the M2 and M20 motorways through Kent.

Section 2 of the project, due to open on 14th November 2007, is a 34 km (21 mile) stretch of track from Ebbsfleet in Kent (near Northfleet) to London St Pancras. The route starts with a 2.5 km (1.5 mile) tunnel diving under the Thames near Dartford, then runs alongside the London, Tilbury & Southend Railway as far as Dagenham, where section 2 enters a 19 km (12 mile) tunnel, emerging over the East Coast Main Line near St Pancras. There are new stations at Ebbsfleet and London Stratford, with a new depot at Temple Mills to the north of Stratford. When the second phase of the CTRL is opened, all Eurostar trains will run to St Pancras International instead of Waterloo International. 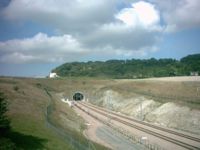 After local protests, early plans were modified to put much more of the track into tunnel up until a point approximately 1 mile from St Pancras. For example, the Link will now pass underneath in a tunnel, rather than alongside, the North London Line on approach into St Pancras. Previously, an elevated section had been expected. The CTRL Section 2 construction works have been causing considerable disruption around the Kings Cross area of London, but will bring in their wake much redevelopment. The huge redevelopment area includes the run-down areas of post-industrial and ex-railway land close to King's Cross and St Pancras.

In 2002 the CTRL project was awarded the "Major Project Award" at the British Construction Industry Awards.

Section 2 of the rail link was a factor in London's successful 2012 Olympic Bid, promising a seven-minute journey time from Stratford to St. Pancras to be operated as Olympic Javelin by Southeastern.

On Tuesday 16th August 2005, a fire broke out on a maintenance train in the tunnel under the Thames. A rail worker died at the scene,[7] while a second worker suffered major burns and was taken to hospital; he died the following Saturday.[8]