In rail transport, a train consists of rail vehicles that move along guides to transport freight or passengers from one place to another. The guideway (permanent way) usually consists of conventional rail tracks, but might also be monorail or maglev. Propulsion for the train is provided by a separate locomotive, or from individual motors in self-propelled multiple units. Most trains are powered by diesel engines or by electricity supplied by trackside systems. Historically the steam engine was the dominant form of locomotive power through the mid-20th century, but other sources of power (such as horses, rope (or wire), gravity, pneumatics, or gas turbines) are possible.

In American railway terminology, the term consist is used to describe the group of rail vehicles which make up a train; similarly, the term trainset refers to a group of rolling stock that is permanently or semi-permanently coupled together to form a unified set of equipment (the term is most often applied to passenger train configurations). In the United Kingdom, the interchangeable terms set and unit are used to refer to a group of permanently or semi-permanently couple vehicles such as those of a multiple unit. While when referring to a train made up of a variety of vehicles, or of several sets/units, the term formation is used. (Although the UK public and media often forgo 'formation', for simply 'train'.)

In the United Kingdom Section 83(1) of the Railways Act 1993 defines "train" as follows:

Similarly, the Atchison, Topeka and Santa Fe Railway's 1948 operating rules define a train as: "An engine or more than one engine coupled, with or without cars, displaying markers."[1] 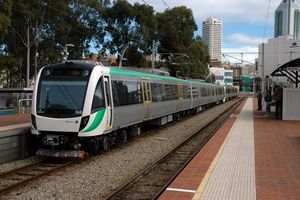 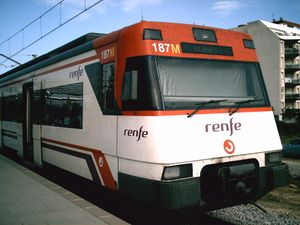 A Renfe Train in Calella, Spain. 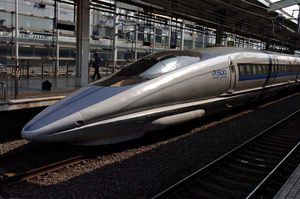 There are various types of trains designed for particular purposes.

A train can consist of a combination of one or more locomotives and attached railroad cars, or a self-propelled multiple unit (or occasionally a single powered coach, called a railcar). Trains can also be hauled by horses, pulled by a cable, or run downhill by gravity.

A passenger train may consist of one or several locomotives, and one or more coaches. Alternatively, a train may consist entirely of passenger carrying coaches, some or all of which are powered as a "multiple unit". In many parts of the world, particularly Japan and Europe, high-speed rail is utilized extensively for passenger travel.

Freight trains comprise wagons or trucks rather than carriages, though some parcel and mail trains (especially Travelling Post Offices) are outwardly more like passenger trains.

In the United Kingdom, a train hauled by two locomotives is said to be "double-headed", and in Canada and the United States it is quite common for a long freight train to be headed by three, four, or even five locomotives. A train with a locomotive attached at each end is described as 'top and tailed', this practice typically being used when there are no reversing facilities available. Where the second locomotive is attached temporarily to assist a train up steep banks (or down them by providing braking power) it is referred to as 'banking'.

Trains can also be mixed, hauling both passengers and freight, see e.g. Transportation in Mauritania. Such mixed trains became rare in many countries, but were commonplace on the first 19th-century railroads.

Special trains are also used for Track Maintenance; in some places, this is called maintenance of way. 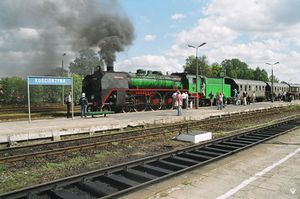 A heritage steam train in Poland 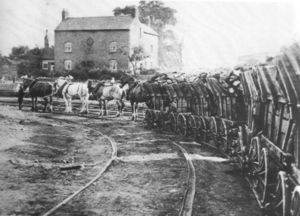 The first trains were rope-hauled, gravity powered or pulled by horses, but from the early 19th century almost all were powered by steam locomotives. From the 1920s onwards they began to be replaced by less labour intensive and cleaner (but more expensive) diesel locomotives and electric locomotives, while at about the same time self-propelled multiple unit vehicles of either power system became much more common in passenger service. Most countries had replaced steam locomotives for day-to-day use by the 1970s. A few countries, most notably the People's Republic of China where coal is in cheap and plentiful supply, still use steam locomotives, but this is being gradually phased out. Historic steam trains still run in many other countries, for the leisure and enthusiast market.

Passenger trains have Passenger cars. Passenger trains travel between stations; the distance between stations may vary from under 1 km to much more. Long-distance trains, sometimes crossing several countries, may have a dining car or restaurant car; they may also have sleeping cars, but not in the case of high-speed rail; these arrive at their destination before the night falls and are in competition with airliners in speed. Very long distance trains such as those on the Trans-Siberian railway are usually not high-speed.

Very fast trains sometimes tilt, like the Pendolino or Talgo. Tilting is a system where the passenger cars automatically lean into curves, reducing the centrifugal forces acting on passengers and permitting higher speeds on curves in the track with greater passenger comfort.

For trains connecting cities, we can distinguish inter-city trains, which do not halt at small stations, and trains that serve all stations, usually known as local trains or "stoppers" (and sometimes an intermediate kind, see also limited-stop). 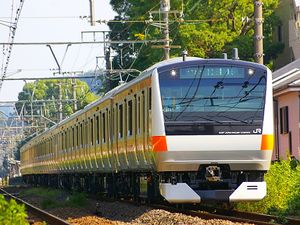 A GNER passenger train speeding down the main line towards London, England A Virgin train speeding down the main line towards London, England For shorter distances many cities have networks of commuter trains, serving the city and its suburbs. Some carriages may be laid out to have more standing room than seats, or to facilitate the carrying of prams, cycles or wheelchairs. Some countries have some double-decked passenger trains for use in conurbations. Double deck high speed and sleeper trains are becoming more common in Europe.

Passenger trains usually have emergency brake handles (or a "communication cord") that the public can operate. Abuse is punished by a heavy fine.

Large cities often have a metro system, also called underground, subway or tube. The trains are electrically powered, usually by third rail, and their railroads are separate from other traffic, without level crossings. Usually they run in tunnels in the city center and sometimes on elevated structures in the outer parts of the city. They can accelerate and decelerate faster than heavier, long-distance trains.

A light one- or two-car rail vehicle running through the streets is by convention not considered a train but rather a tram, trolley, light-rail vehicle or streetcar, but the distinction is not always strict. In some countries such as the United Kingdom the distinction between a tramway and a railway is precise and defined in law.

The term light rail is sometimes used for a modern tram, but it may also mean an intermediate form between a tram and a train, similar to metro except that it may have level crossings. These are often protected with crossing gates. They may also be called a trolley.

The term rapid transit is used for public transport such as commuter trains, metro and light rail. However, in New York City, lines on the New York City Subway have been referred to as "trains".

Some commuter trains in Tokyo, Japan have special cars which the bench seats fold up to provide standing room only during the morning rush hour (until 10 a.m.). The E231 series train has two of these cars in each set (Usually 10 or 11cars per set), officially nicknamed "roku-tobira-sha" (literally, "6 door car") - all the other cars have four sets of doors on each side. 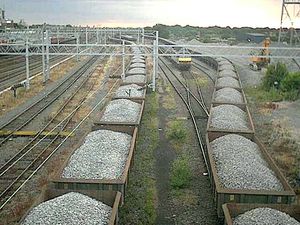 An SP freight train west of Chicago in 1992. Freight trains have freight cars. Much of the world's freight is transported by train. In the USA the rail system is used mostly for transporting cargo (or freight).

Under the right circumstances, transporting freight by train is highly economic, and also more energy efficient than transporting freight by road. Rail freight is most economic when freight is being carried in bulk and over long distances, but is less suited to short distances and small loads. Bulk aggregate movements of a mere twenty miles can be cost effective even allowing for trans-shipment costs. These trans-shipment costs dominate in many cases and many modern practices such as container freight are aimed at minimizing these.

The main disadvantage of rail freight is its lack of flexibility. For this reason, rail has lost much of the freight business to road competition. Many governments are now trying to encourage more freight onto trains, because of the environmental benefits that it would bring.

In some countries "piggy-back" trains are used: trucks can drive straight onto the train and drive off again when the end destination is reached. A system like this is used on the Channel Tunnel between England and France and between France and Italy (Modalohr road trailer carriers). Piggy back trains are the fastest growing type of freight trains in the United States, where they are also known as 'trailer on flatcar' or TOFC trains. There are also some "inter-modal" vehicles, which have two sets of wheels, for use in a train, or as the semi-trailer of a road vehicle. This is obsolete, the current semi-trailers have road wheels only and are carried on specially adapted trucks when moving on rails, for specific details see Roadrailer.

Freight trains are sometimes illegally boarded by passengers who do not wish, or do not have the money, to travel by ordinary means. This is referred to as "hopping" and is considered by some communities to be a viable form of transport. Most hoppers sneak into train yards and stow away in boxcars. More bold hoppers will catch a train "on the fly", that is, as it is moving, leading to occasional fatalities.

Famous historical train services include the: