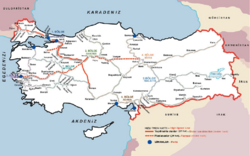 Turkey started building high-speed rail lines in 2003. The first line which has a length of 533 km, from İstanbul (Europe's largest metropolis) via Eskişehir to Ankara (capital of Turkey), is under construction and will open in 2007 reducing the traveling time from 6–7 hours to 3 hours 10 minutes. The Ankara - Konya line began construction in 2006. A travel time of 70 minutes is foreseen for this track. Several other lines between major cities such as;

are planned to be built in coming years. The commercial high speed trains are expected to reach a top speed of 250-300 km/h (150-200 mph). The first 10 high speed train sets are ordered from CAF company,Spain. For further sets to be used in new planned tracks and the current ones under construction, a joint enterprise between Korean ROTEM and Turkish TÜVASAŞ had been established, and a factory in Adapazarı,Sakarya Province had been founded.