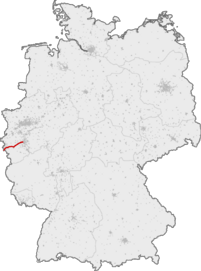 The Cologne–Aachen high-speed line is the German part of the Trans-European transport networks project "high-speed line Paris–Brussels–Cologne". It is not a newly built railway line, but a project to upgrade the existing railway line which was opened in 1841 by the Rheinische Eisenbahn railway company. When it was continued into Belgium in 1843, it became the world's first international railway line.

The line inside Germany has a length of about 70 kilometers. The first 40 km from Cologne to Düren have been rebuilt. Since 2002 the line allows for speeds up to 250 km/h. Separate tracks have been built parallel to the high-speed tracks for local S-Bahn traffic. The remaining line from Düren to Aachen allows speeds up to 160 km/h with some slower sections. Upgrades of Düren–Aachen are planned for the near future.

One bottleneck between Aachen and the Belgian border is the Buschtunnel. It is the oldest railway tunnel in Germany that is still in use with some parts dating back to 1838. When the line was electrified, available space inside the tunnel mandated that the line was limited to a single track. Because of the tunnel's poor conditions, speeds had to be limited to 40 km/h. A parallel single-track tunnel is under construction. When the new Buschtunnel is completed, the old tunnel will be temporarily closed for renovation. After completion of these works, both tunnels will be safe for 160 km/h.

In Belgium, the high-speed line is continued as HSL 3.