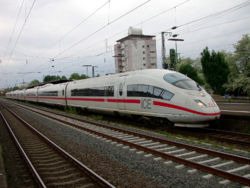 Construction on first German high-speed lines began shortly after that of the French LGVs. Legal battles caused significant delays, so that the InterCityExpress (ICE) trains were deployed ten years after the TGV network was established. The ICE network is more tightly integrated with pre-existing lines and trains as a result of the different settlement structure in Germany, which has almost twice the population density of France. ICE trains reached destinations in Austria and Switzerland soon after they entered service, taking advantage of the same voltage used in these countries. Starting in 2000, multisystem third-generation ICE trains entered the Netherlands and Belgium. The third generation of the ICE reaches a speed up to 363 km/h (226 mph). Admission of ICE trains onto French LGVs was applied for in 2001, but trial runs have only just been completed in 2005. Unlike the TGV or Shinkansen, a first generation ICE has had a fatal high speed crash (near Eschede), following numerous complaints of excessive shaking. Since the crash, the ICE wheels have been redesigned.

Germany is also developing Transrapid, a magnetic levitation train system. The Transrapid reaches speeds up to 550 km/h (340 mph). A test track with a total length of 31.5 km (19.5 mi) is operating in Emsland. Unfortunately, on Sept 22 2006, 23 people died when this elevated magnetic train collided with on-track maintenance equipment near Lathen in north-western Germany. In China, Shanghai Maglev Train, a Transrapid technology based maglev built in collaboration with Germany, has been operational since March 2004.