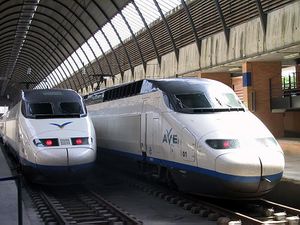 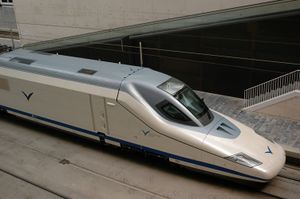 AVE "Talgo 350" power car, with a distinctive shape designed to cut down on noise pollution.

AVE, an acronym for Alta Velocidad Española (literally, "Spanish High Speed" but ave also meaning "bird" in Spanish) is a high speed train that can achieve speeds of up to 186 mph (300 km/h) on dedicated track.

Unlike the rest of the Spanish broad-gauge network, the AVE uses standard gauge, permitting direct connections outside Spain in the future. All AVE trains are currently operated by RENFE, the Spanish state railway company, although it is possible that private companies may be allowed to run lines in the future.

It has been suggested that the PSOE government chose the French Alstom bid over the Siemens and Talgo bids for political rather than technical reasons, rewarding the French government for its assistance in capturing ETA activists who took "sanctuary" across the border in Southern France. Sevilla's hosting of the 1992 World's Fair prompted its choice for the inaugural AVE line, but there were also accusations that the Spanish head of government Felipe González favoured his home city. Sevilla is the fourth biggest city in Spain, after Madrid, Barcelona and Valencia, with a population of some 700,000.

The service guarantees arrival within 5 minutes of the advertised time, and offers a full refund if the train is delayed further, although only 0.16% of trains have been so. In this regard, the punctuality of the AVE is exceptional compared to other non long distance RENFE services, and especially when compared to the French TGV system.

The high speed of the train link combined with high property prices in Madrid has encouraged many Madrid commuters to settle in Ciudad Real, the first stop on the Madrid-Sevilla line.

The high-speed line connecting Madrid and Barcelona is in its final stage of construction between Camp de Tarragona and Barcelona. The initial section from Madrid to Lleida, via Zaragoza, opened on the 11 October 2003. And on the 18th of December 2006 the AVE started operating to Camp de Tarragona. This puts Tarragona at only 2 hours and 53 minutes from Madrid and 30 minutes from Lérida. Five trains a day will now run on this line in each direction. Between Lleida and Tarragona the trains will initially run at 124 mph (200 km/h) increasing speed throughout the year to the target of 300 km/h. The trains currently run at 174 miles (280 km/h) between Lérida and Madrid and should being running at 186 mph (300 km/h) in early 2007. On the inauguration day of the Madrid-Tarragona line the Ministerio de Fomento reiterated its promise that the AVE would reach Barcelona by the end of 2007[1]. When completed, the Madrid-Barcelona line should be one of the world's fastest long-distance trains in commercial operation, with trains billed to reach a top speed of 350 km/h and covering the 373 miles (600km) between the two cities in 2.5 hours.

Although until 2005 both Siemens and Talgo/Bombardier train sets consistently failed to meet scheduled speed targets, in a test run during the homologation tests of the new S102 trains of Renfe, a train-set Talgo 350 (AVE S-102) reached a speed of 365 km/h on the night of the 25th to the 26th of June, and on August 2006 a train-set Siemens (AVE S-103) reached the highest top speed ever in Spain: 251 mph (403.7 km/h). On 19th May 2006 AVE trains on the Madrid-Lleida line began operating at 155 mph (250 km/h). On the 16th October the trains on this line increased their operating speed to 174 mph (280 km/h) after the replacement of the Spanish ASFA signalling system with level 1 of the new European ETCS/ERTMS system. RENFE claim that the train will begin operating at 186 mph (300 km/h) in early 2007. To achieve the long term goal of increasing operating speed to 218 mph (350 km/h) level 2 of the ETCS/ERTMS system is required, which, in theory, will be installed in 2008.

It is forecast that the AVE will substantially replace air traffic on the Barcelona - Madrid route (in the same way that the Eurostar has on the London-Paris/London-Brussels routes and France's TGV has on the Paris-Lyon route). In fact, more than 80% of travellers between Madrid and Sevilla use the AVE, and only less than 20% the airplane.

Construction of a segment to Valladolid, extension of the Sevilla line to Málaga, as well as similar extensions of the system to Valencia and Alicante are also underway. The AVE will connect with the French TGV network in 2009 with the opening of the LGV Perpignan-Figueres, allowing services to go to French destinations such as Marseille and Avignon. Another connection to the TGV is also planned, at either La Jonquera in Catalonia or Irun in the Basque Country. Further expansions to Galicia, the Basque Country (including the so-called Basque "Y" connecting the capitals of the three Basque provinces).The AVE Madrid-Lisbon line is currently being constructed, and it will include a significant international station in the border near the spanish city of Badajoz

Also, new lines are being debated; for example, the line Soria-Calatayud; it would connect Soria with line Madrid-Barcelona in Calatayud.

The Spanish government has an ambitious plan to have 4350 miles (7000km) of high-speed rail operational by 2010, with all provincial capitals at most only 4 hours from Madrid, and 6.5 hours from Barcelona. Critics of this scheme point out that raising the average speed of Spain's regional trains would achieve a much greater global impact at much less cost. At present, there are some rural lines where average speeds barely exceed 37mph (60 km/h). The speed between some provincial capitals is little better; for example, it takes some 9h30min to cover the 487 miles (784km) between León and Barcelona.

On the other hand there has been a great improvement of speed and time with trains that link Madrid with other capitals that do not have direct AVE connections, but that use the high speed line for most of the route, such as Huelva (4h50min), Cádiz (4h55min), Pamplona (3h30min) and Logroño (3h40min).

The construction of the high speed Madrid-Barcelona line encountered unforeseen geological problems, with the result that trains are not currently running at their full speed between Madrid and Lleida. Geologists have been particularly critical of the stretches built on weak clays in Aragon and large pits have appeared near the track. This latest AVE project has been plagued by major failures regarding signalling equipment, train speeds, and tunnel design. More recently, plans to build a shallow AVE tunnel under the fragile foundations of Barcelona's 19th century city centre instead of by a low-impact coastal route have incensed some 50,000 residents, threatening Barcelona's ex-mayor Joan Clos' political future as a result.

The central hub of the system is Madrid's Puerta de Atocha station.

According to the Strategic Plan for train infrastructures developed by the Spanish Ministerio de Fomento Ministry of Public Works, called PEIT, a second expansion program is planned to start in 2010-2011, when the last lines of the first program still under construction begin to operate. This plan has a ten-year scope, ending 2020, and its ambition is to make the 186 mph (300 km/h) network reach 6215 miles (10,000km) by the end of that year, the most extensive in Europe, with several operational links with France and Portugal. This plan is by far the most ambitious in the European Union.