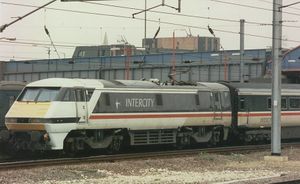 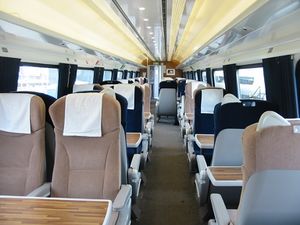 The InterCity 225 is the fastest loco-hauled domestic train in the United Kingdom, comprising a Class 91 electric locomotive, and nine Mark 4 coaches and a Driving Van Trailer. The Class 91 locomotives were built by BREL at Crewe works as a spin-off from the Advanced Passenger Train project, which was abandoned during the 1980s, whilst the coaching stock was built by GEC-Alsthom in Birmingham - again borrowing heavily from the APT - see High Speed Train page for more details.

The InterCity 225 has a theoretical top service speed of 140mph (225 km/h); during a test run on Stoke Bank between Peterborough and Grantham an Intercity 225 reached 261.7 km/h. However, except on the Channel Tunnel Rail Link which is equipped with cab signalling, British signalling does not normally allow trains to exceed 200 km/h, due to the impracticality of observing lineside signals at high speed. The Advanced Passenger Train of the early 1980s used a new hydrokinetic braking system to allow it to brake from 155mph (250 km/h) within existing signalling distances. It is believed that the InterCity 225 project was originally to be called APT-U, but this name was dropped after the failure of the previous APT-P trains and to avoid the negative publicity related to the APT.