High-speed rail in the United States 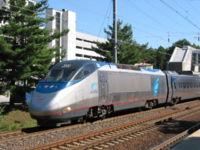 An Acela Express train, currently the only high-speed rail line in the U.S.

High-speed rail in the United States is more a case of hope than reality. It is possible to trace the development of high-speed railways back to the streamliners that criss-crossed the United States in the 1930s, 1940s, and 1950s which, in turn, can be traced further back to the competing companies operating different routes between London and Scotland, and to railways in Germany and France. However, several factors contributed to the stagnation of rail passenger transport in the U.S. just as Europe and Japan were pushing forward. There has been a resurgence of interest in recent decades, with many plans being examined for high–speed rail across the country, but current service remains relatively limited. High jet fuel prices, congested airports and highways, and increasing airport security rules regarding liquids and electronics that force most travellers to check baggage make high-speed rail options more attractive. 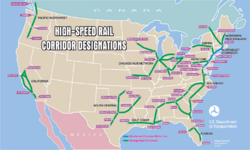 This map from 2001 shows a number of proposed high–speed routes in the U.S.

The major passenger carrier in the U.S., Amtrak, has been operating Acela Express trains between Boston and Washington, D.C. since 2001. These trains tilt into curves along the track, reaching a top speed of 150 mph (240 km/h). This maximum speed might not be considered fast enough for this train to be designated a high–speed train. The scheduled transit time for the 5 am departure from Washington DC arriving in Boston's South Station on Acela express service is roughly 6 hours 36 minutes; subtracting a fifteen minute scheduled layover in New York City, the average speed is 68 mph for the 450 mi (720 km) trip.

High-speed rail in the U.S. today remains largely in an early, conceptual stage. The U.S. efforts have been multi–pronged. Various states have promoted study and design of high-speed rail lines, and six corridors have been designated by U.S. Department of Transportation for study:

The Clinton Administration proposed a High Speed Rail Development Act in 1993 to study the issues involved and provide seed money. Money was set aside in Intermodal Surface Transportation Efficiency Act (ISTEA 1991) for maglev development, and proposals for deployment have been made in Orlando, Florida and in Texas, but there is still no operating maglev in revenue-earning passenger service in the United States. Amtrak's North East Corridor has been electrified and has seen elimination of grade crossings.

In terms of its top–down planning, the development of high–speed rail in the U.S. borrows conceptually from the interstate highway system. Typically modes emerge without either significant or central planning at the outset. Examples include air travel, highways, and rail. Later, central planning is tacked on, as when the government established specific trans–continental routes, or began funding airports or the interstate highways. In all likelihood this probably confirms high–speed rail's role as a successor to conventional rail rather than holding status as a new mode on its own.

Operationally, the systems are largely adapted from conventional rail systems, with similar labor organization and ownership in Japan and France and similar architectures in many other respects.

California has been discussing plans to link its major urban centers with high-speed rail links, and possibly maglev service. Speed is likely an important consideration in heavily suburban, automobile-centric California.

New York State has been actively discussing high-speed rail service since the 1990s, but thus far little progress has been made. Amtrak Acela service between Washington, D.C., and Boston, Massachusetts, is available to New York City, but the cities in Upstate New York and Western New York remain isolated from high-speed rail service. Further, destinations outside the New York metropolitan area have been plagued by delayed service for decades. Nonetheless, New York has been quietly endorsing and even implementing rail improvements for years.

Closer and faster railroad transportation links between New York City and the rest of the state are frequently cited as a partial solution to Upstate's stagnant economic growth.

The Keystone Corridor was upgraded in 2006 with two segments of 110 mph operation between Philadelphia and Harrisburg, with express service taking 90 minutes over 103.6 miles, which is the fastest average speed outside the NEC.

The Midwest Regional Rail Initiative or Midwest Regional Rail System (MRRI, MWRRI, or MWRRS) is a plan to implement a high-speed rail network in the Midwestern United States, using Chicago, Illinois as a hub and including 3,000 miles (5,000 km) of track. Primary routes would stretch across Illinois, Indiana, Michigan, Minnesota, Ohio, and Wisconsin, possibly reaching Kentucky. Secondary routes would operate at a somewhat slower speed across Missouri and Iowa, just touching Nebraska and nearly reaching Kansas. Existing Amtrak routes would probably be upgraded as part of this plan, which has been in development since 1996. Michigan has begun upgrading track and signals, already resulting in increased service speeds for Amtrak's Wolverine service. [1] However, similar efforts in Illinois have met with considerable technical difficulties. [2] In most states funding remains a problem making it unclear when construction might begin.

The plan was to connect the "Texas Triangle" (Houston - Dallas - San Antonio) with a privately financed high speed train system which would quickly take passengers from one city to the next at prices designed to compete with or beat other transport options. This was the same model Southwest Airlines used 20 years earlier to break in to the Texas market where it served exactly the same three cities.

Funding for the project was to come entirely from private sources, since Texas did not allow the use of public money. The original estimated cost was $5.6 billion, but the task of securing the necessary private funds proved extremely difficult.

Southwest Airlines, with the help of lobbyists, created legal barriers to prohibit the consortium from moving forward and the entire project was eventually scuttled in 1994, when the State of Texas withdrew the franchise.

A more recent proposal for high-speed rail in Texas is part of a larger proposed, state-wide super-infrastructure, the Trans-Texas Corridor.