Treno Alta Velocità SpA is special purpose entity owned by RFI for planning and construction of high-speed rail lines along Italy's most important and saturated transport routes. These lines are often referred as TAV lines. 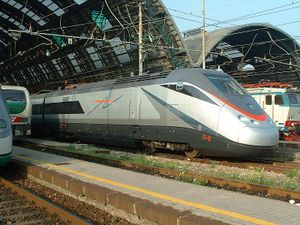 The purpose of TAV construction is to aid travel along Italy's most saturated and used rail lines and to add tracks to these lines, namely the Milan-Naples and Turin-Milan-Venice corridors. One of the focuses of the project is to turn the rail network of Italy into a modern and high-tech system of passenger rail in accordance with updated European rail standards. A secondary purpose is to introduce high-speed rail to the country and its high-priority corridors. An important consideration of the lines is to improve travel times, train frequency, and safety. When demand on regular lines is lessened with the opening of dedicated high-speed lines, those regular lines will be used primarily for low-speed regional rail service and freight trains. With these ideas realised, the Italian train network can be integrated with other European rail networks, mostly the French TGV, German ICE, and Spanish AVE systems.

In Italy, the dominant method of transport is the use of automobiles and the motorway network. There is a very strong divide of how people and goods are transported, the majority being carried using cars and trucks. A major reason to develop a highly developed and systematic rail network in the country is to encourage a sense of competitiveness between different modes of transport and to improve an under-utilised and aging rail infrastructure which lags behind the rest of Western Europe. Turning the Italian rail lines into high-capacity corridors ensures another transport option that is up to the standards of the rest of the continent. With two core lines, rail can branch out and reach more destinations than it has ever before in Italy. High-speed trains will connect major cities within the country along dedicated routes with speed unattainable by cars.

Eurostar Italia is a system of quality trains operated by Trenitalia on the routes connecting the main Italian cities and towns. Several types of high-speed trains belonging to two major families carry out the service:

In 2008 a new class of Pendolino (ETR 600, or Superpendolino, built by Alstom) will be introduced on TAV lines. 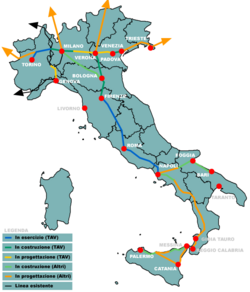 Current progress of the TAV network.

The following lines of the TAV system are already in use.

Construction of the line started 1994, and it opened December 2005. The last 20km of the Naples side of the line are still under construction. Trains on this line utilise 25kV 50Hz power.

These lines are currently under construction and are expected to open in the near future or next few years. 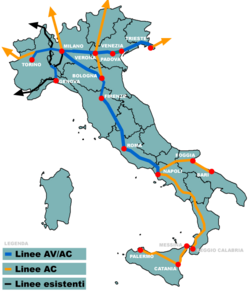 The beginning of construction on the Verona-Venice line has not been established.

Construction is expected to begin in 2006.

Similar to the Milan-Genoa line, construction will start in 2006.

The Lyon-Turin railroad would connect Lyon, Chambéry, Turin and it would join the French TGV and Italian TAV networks

A route connecting the Italian TAV network to Switzerland and Germany would do so through Swiss project AlpTransit, which includes Gotthard Base Tunnel and Lötschberg Base Tunnel.

The Brenner Basistunnel would link Verona, Innsbruck, Munich, to connect the Italian, German, and Austrian railways.

Having a connection with Ljubljana encourages development of rail into Eastern Europe and could help link the Czech Pendolino and Italian TAV networks.