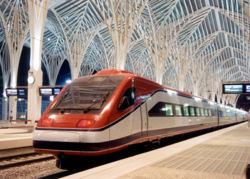 The Portuguese government has approved the construction of two high-speed lines from the capital Lisbon to Porto and Madrid from 2007, bringing the countries' capital cities within three hours of each other. There has been an intense public debate on these plans, since the Spanish connection to the border is the worst possible for Portuguese interests[citation needed]. Since the late 1990s, the Italian tilting train, the Pendolino runs the Alfa Pendular service, connecting Portugal's mainland from the north border to the Algarve (southern counterpart)at a speed of up to 220 km/h (135 mph).