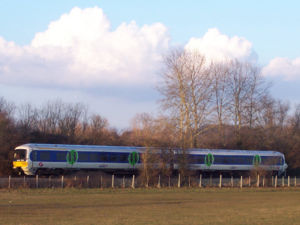 A Class 165 DMU runs beside the River Thames between Bourne End and Marlow. This service is known locally as 'The Marlow Donkey'.

The Marlow Branch Line is a small railway line between Maidenhead in Berkshire, England and Marlow in Buckinghamshire. Passenger services are operated by First Great Western using Class 165 DMUs. The line serves the following places:

The Bourne End to Marlow section of the line was originally a branch to the Maidenhead to High Wycombe line, because of this it is a terminus station, with two lines coming in on separate platforms. As the only part of the line with parallel tracks, Bourne End station is used during peak times as shuttle point for two trains, thus allowing a roughly half hourly service. Most of the time a single train runs from Maidenhead to Marlow and back again, once per hour. There is one train per day that runs direct from Bourne End to Paddington station.

The original Maidenhead to High Wycombe branch line had stops at:-

In 1937 Furze Platt station was added on the outskirts of Maidenhead (before Cookham station). In 1873 an extension was added connecting Marlow station to Bourne End station.

In July 1846, The Wycombe Railway Company was incorporated by an Act of Parliament. The act authorised the construction of a single line from the original Great Western Railway (GWR) station at Maidenhead, to High Wycombe. Construction began in 1852, and the completed line to High Wycombe, was finally opened on 1 August 1854. The line left the GWR main line at the site of the present Maidenhead station, the first stop of which was Maidenhead (Wycombe Junction), renamed in the 1860s, Boyne Hill. This station was closed on 1 November 1871 upon the opening of the present Maidenhead station. The Wycombe Railway Company was taken over by GWR on 1 February 1867. In August 1867 the business men of Great Marlow met to discuss linking Marlow with the GWR Wycombe Branch line, at the then Marlow Road station (now Bourne End). This line opened on 23 June 1873, with no. 522, 0-4-2 saddle tank locomotive (built at Wolverhampton in 1868), it was affectionately known as the Marlow Donkey. No. 522 was rebuilt at Swindon Works in 1884 and remained in service until 1935[citation needed]. The GWR acquired the capital and operated the line from 1897.

In the 1960s the branch began to decline. In July 1962 the steam locomotive was replaced with a Diesel multiple unit. The service was gradually cut back through to 1969, by which time Marlow station had been knocked down and replaced by a much smaller one, further down the line, Loudwater and Wooburn Green had lost their ticket offices, Loudwater had been reduced to a single track halt and Cookham had lost its passing place. On 2 May 1970 the stretch of track from Bourne End to High Wycombe was closed. To be fair to Beeching, the closed stretch included 5 level crossings, all of which had to be manned. No doubt a significant saving at the time. 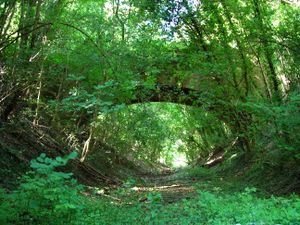 During the 1970s and 1980s, much of the land occupied by the old line was sold off and a number of buildings were built on the path of the old railway, and two of its three bridges were demolished (the one at the bottom of Abbey Barn Lane continues to carry the road over the site of the old line). To prevent future incurrsion, the path of the old railway line through Bourne End, Wooburn Green, Loudwater and the Wycombe Marsh area of Wycombe, is now listed in the local plan, as set aside as a footpath/cycle route or bus route. Unfortunately building around the old Wooburn Green station, now means it is unlikely ever to be restated as a railway, as it would cost millions of pounds to acquire the land needed.

The line is not electrified. 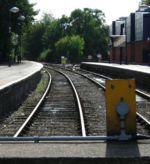 From splitting with the Great Western Main Line at Maidenhead station, it turns North and enters a cutting, going under Grenfell Road and the A4 Castle Hill, passing over the A308 Marlow Road and then a level crossing on Harrow Lane just before it's next stop, Furze Platt. From Furze Platt it passes under B4447 Garner Road, alongside the old Maidenhead Road as it exits the town, continuing through countryside briefly before crossing over the B4447 again before the third stop, Cookham. Immediately after leaving Cookham there is a level crossing on Station Hill, a slight cutting passing under Terry's Lane, up on a viaduct over Cockmarsh before crossing the Thames, and arriving shortly after at Bourne End. Here the driver changes ends for Marlow, turning back along the north bank of the Thames by Spade Oak, passing south of the water treatment works, under the A404 Marlow bypass and finally Marlow station, where the line terminates.

Through the day the line normally operates with one train per hour in each direction, but during the morning and evening peaks the train frequency is roughly every 30 minutes, with two trains running the line, one shuttling between Bourne End and Marlow, and one between Bourne End and Maidenhead. Most trains on the line begin and terminate at Maidenhead, but some trains run through to London Paddington.