The Hastings Line is a British railway line in Kent and Sussex, which links Hastings with Tonbridge, and from there into London via Sevenoaks.

The line was opened by the South Eastern Railway (SER) in main three stages:

The Hastings Line is built over difficult terrain across the Weald. As a result there are seven tunnels constructed through the Sandstone Hastings Beds. The SER were anxious to construct the line as quickly as possible, since they were in competition with the London, Brighton and South Coast Railway to obtain entry to the south coast seaside resort of Hastings; the line, in spite of its problems, was opened from Tunbridge Wells in a year. The contractors responsible for building the tunnels cheated the SER by reducing the planned six layers of bricks through the tunnels to four.

It was only when the Wadhurst tunnel collapsed in 1862 that this was discovered. It was too expensive to re-bore the tunnels, so the SER added the two missing layers. This obviously reduced the the width, and from then on, until quite recently, it has always been necessary to work the line with narrow rolling stock. The first most successful locomotives built to cope with the necessary weight and loading gauge restrictions taken into account were the "Schools" class built in the 1930s; the cab roofs in particular were narrower than main line locomotives. They worked the line until 1957 when steam gave way to diesel and units of what became classes 201, 202 and 203 (the "Hastings Diesels") took over working the route. These units were constructed of narrow rolling stock. They were delivered in six-car formations (the Class 203 including a buffet car) and two units were often operated in multiple to form twelve- car trains. In latter years some of the units were reduced to five and (later still) to four cars.

The final solution on the line was to convert the most restricted of the tunnels to single-line working, interlacing [dubious — see talk page] the tracks though the tunnels. This was achieved in 1986, and at the same time the line was electrified using 750 v DC third-rail.

The seven tunnels in order from north to south are:

All the tunnels on the Tonbridge to Bopeep junction line (SO170) are now singled (interlaced tracks[dubious — see talk page]), the tunnels on the East Coastway Line (SO600) are doubled. The Wadhurst and Mountfield tunnels were those causing the major problems before the changes.[1]

All the stations south of Tunbridge Wells were built to the designs of William Tress in Italianate and Gothic styles.

Train services on the line are provided by Southeastern, and mostly operated by Class 375 Electrostar units.

The line still sees a freight service to and from the gypsum sidings at Mountfield.

Driver's view of the line

There is a DVD called 1066 DC, which shows a driver's eye view of a journey from Hastings to Charing Cross. 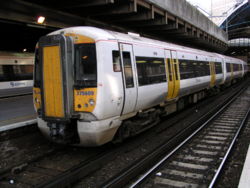 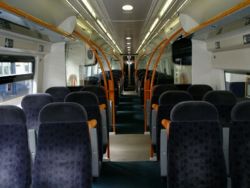 Interior of electrostar on Hastings line
Retrieved from "http://train.spottingworld.com/wiki/index.php?title=Hastings_Line&oldid=18312"
Categories: