The South Western Main Line is the British railway line from London Waterloo to Weymouth on the Dorset coast.

Many sections of the line are relatively high-speed, with large stretches cleared for 100mph running.

The first section to be opened was from Nine Elms, the LSWR's first London terminus in the suburban parish of Battersea, to Woking (then named Woking Common) on 21 May 1838.

The remainder of the main line followed over the next two years:

The main towns served by the route, starting from London, are: 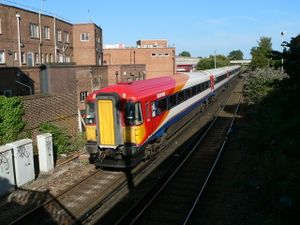 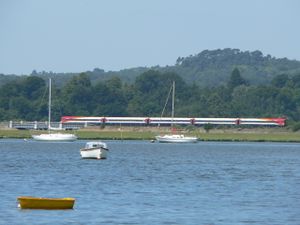 A train on the South Western Main Line at Holes Bay

The suburban portion of the line, as far as the junction for Alton, was electrified (750v DC third rail) by the London & South Western Railway and its successor, the Southern Railway, prior to World War II.

The main portion of the line to Southampton and Bournemouth was electrified in 1967. Electrification was extended to Weymouth in 1988 and saw the introduction of the new Class 442 'Wessex Electric' trains.

The majority of passenger services are currently operated by South West Trains, with an hourly service departing Weymouth on the hour and Waterloo at 35 minutes past the hour; additional trains operate from Wareham to Winchester, stopping at all stations. Virgin Trains services between the Midlands and Bournemouth join the South Western Main Line at Basingstoke.