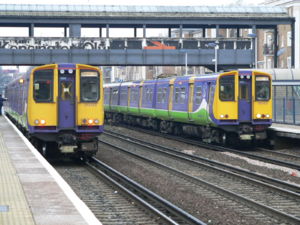 The West Cross Route, one side of the Ringway 1 inner ring road, would have paralleled the West London Line.

Local trains run every half hour and are operated by London Overground, and hourly Southern trains run from Brighton or Gatwick Airport to Watford Junction, not stopping at Willesden Junction. The line also carries considerable freight and was used by Eurostar trains between Waterloo International and the depot at North Pole Junction prior to November 2007.

History of the line

The railway was originally built as an atmospheric railway running between Wormwood Scrubs and Shepherds Bush opening in 1840. Later converted to an orthodox railway it came to prominence as an avoiding line facilitating through-running on the west side of London, especially for freight:

The line is electrified at 750V DC (third rail) from the south to the North Pole depot, where the electrification changes to 25kV AC (overhead). The work was carried out as part of Channel Tunnel infrastructure improvements in 1993. The northern section of the line, from Willesden Junction to Earls Court (via Kensington Olympia), was electrified by LNWR in 1915, but passenger service was discontinued due to bomb damage in World War Two[1]. 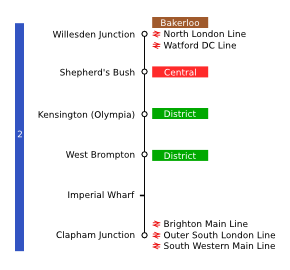 Line map of the West London Line, including planned and under construction stations, showing connections and travelcard zones

This description of the Line, from north to south, giving former and present-day details, and details the links with all the constituent railways:

(The station still not open as of January 2008, due to one of the platforms are deemed to be some 18 inches/45cm too narrow, and when the new shopping centre opens in late 2008, currently claims have been made that that platform would not be able to cope with all the proposed passenger traffic estimated to use the new station).